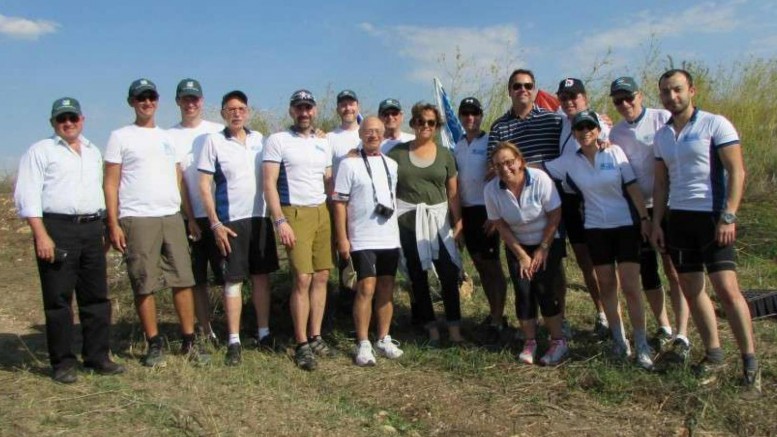 The JNF Canada Bike Mission participants had an amazing and unique Israel experience as they biked their way across the Holy land.

(EJNews) – On Sunday, November 1, 2015, members of the JNF Canada Bike Mission in Israel arrived at KKL-JNF’s Nachshon Forest Tree Planting Centre, where they met members of another Canadian mission that was in Israel at the same time, the JNF Canada October Mission. They were also joined by the Canadian Ambassador to Israel, the Honorable Ms. Vivian Bercovici and senior KKL-JNF officials, who participated in the group’s activities.

The JNF Canada Bike Mission was spearheaded in Edmonton with Sam Marcushamer leading the contingent that left Canada on October 25. “We’ve been biking on KKL-JNF trails all over Israel, in the Golan Heights, the Galilee, the Judean Mountains and more,” he explained. “We’ve been doing anywhere from 35-65 kilometers a day, and we’re talking about 12 bikers aged 30-75.” 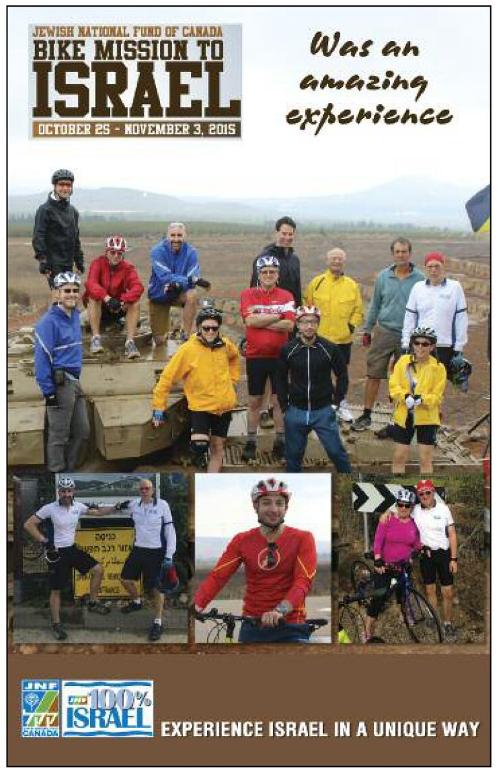 Participant Tania Susskind said, “It’s been beyond our wildest dreams, and Amir Rockman, our guide, has been totally amazing.”

“This has been an incredible and meaningful experience,” stated Erin Wright. “The bicycle allows an up close and personal interaction with our homeland and the amazing people and places.  I was fortunate to take this trip with a great group of fellow travellers and I hope to go again next year!

Sharon Bookhalter and Jerry Glasser added, “This has been a great way to experience Israel. Our only disappointment was that it ended too soon. It was a great ride and a wonderful experience with a terrific group of people.”

“It’s been the best way to experience the country that I love,” agreed Slava Aranov. “This whole trip has been amazing.”

“After experiencing this trip I can’t imagine a better way to see the country,” noted Ed Lazar. “Every day gave options to make this pleasurable and suitable for riders of all abilities. We’ve enjoyed spectacular scenery and an amazing guide. For me it was a once in a lifetime excuse and opportunity to travel as an adult with my father. It’s been a very special trip for both of us.”

“The sites we visited were amazing,” added Michelle Marcushamer. “Everywhere we went there was a KKL sign or area or park, twice I heard comments like: I knew JNF did trees and water but never imagined the vast involvement, foot print and development that JNF has in Israel.”

The groups attended a festive lunch at Ayalon-Canada Park, where they were joined by Gilad Shalit, an Israeli soldier who was held in captivity for 5 years in Gaza by Hamas until his release four years ago. Speaking to the mission at the park, Ambassador Vivian Bercovici planted a tree and said that she remembered Canada Park as a child. “It’s so much more beautiful now, really a pleasure for the eyes. I also recently attended the dedication of KKL-JNF’s new botanical gardens in Acco, and I must tell you that it’s more beautiful than any park I remember in Canada. It’s wonderful that you came to Israel even at such a difficult time. The country is challenging but safe.”

Avi Dickstein, Executive Director of the KKL-JNF Resources, Development and Public Relations Division noted that Ayalon-Canada Park is fraught with history. “The Maccabees fought here, and fierce battles were fought here during Israel’s War of Independence. I want to thank JNF Canada for taking the initiative of creating Ayalon-Canada Park, which today is one of the main parks in Central Israel.” 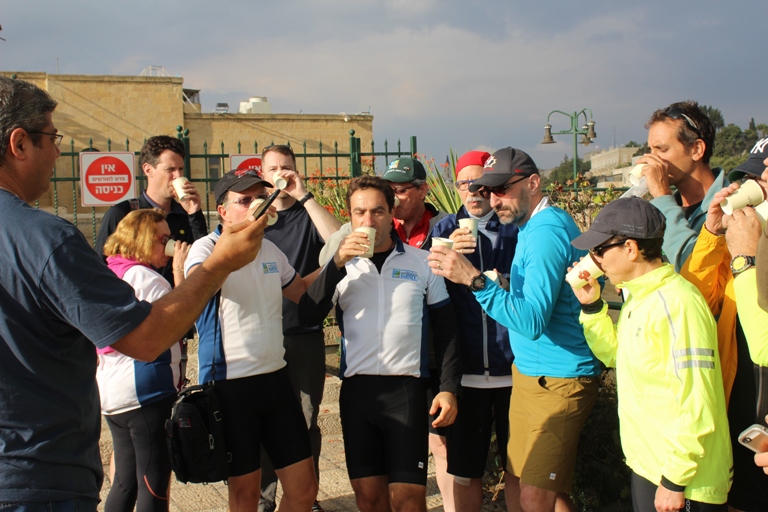 The JNF Bike Mission participants enjoy a le’Chaim after an exciting day of touring Israel.

CEO of JNF Canada, Josh Cooper, introduced Gilad Shalit, who was the guest of honour. “Gilad was released four years ago. I met him a year and a half ago and since then we have become good friends. Gilad was in Canada for a speaking tour and when I asked him what he likes to do, he said cycling. So we decided that the money from the tickets would go towards creating a biking trail in Canada Park in honour of all the Israeli soldiers who had been in captivity. This is the trail that we will be dedicating today.”

Gilad Shalit said that he was very excited to be at the dedication ceremony. “When I was in captivity, people all over the world prayed for me and wrote letters to their governments. I want to especially thank Canadian Jewry, for whose unwavering support I am very grateful.”

After lunch, the mission walked up the hill for the dedication of the new Ayalon cycling trail.

The ceremony was MC’d by KKL-JNF Chief of Protocol, Andy Michelson. The group also met Nurit Hibsher, KKL-JNF’s first female forester. She described the new single, which is 10 kilometers long. The ceremony took place at the exact point where the new single connects with the older Ayalon-Canada Park cycling trail, creating 20 kilometers of an exhilarating riding experience. Yiftah Sever, who planned the trail, added that it was unique in terms of the diversity of sites that it traverses, showcasing everything Ayalon-Canada Park has to offer.

Edmontonian Gillian Horowitz summed up her experience with the JNF Canada October Mission. “This is my first time in Israel with KKL-JNF. It’s been incredible, first-class, I was amazed by the diversity of KKL-JNF’s projects, and the leadership is fabulous. I’ve simply run out of words to describe my experience.”

Bike Mission participant Sam Koplowicz added, “Since it was my first ever visit to Israel, I have an overwhelming barrage of impressions to process. Riding a bicycle through the countryside is without question one of the very best ways to experience any place but especially Israel. I have a real “earthy” sense of the Galilee, the Hula Valley, the Golan Heights, Lake Kineret, the Judaean Hills west of Jerusalem, etc.’

“For me the most unforgettable experience was Kabbalat Shabbat at the Wall,” he concluded. “Walking through parts of Jerusalem and Tel Aviv were also memorable, as was planting my own tree in the Canada Forest. I would participate in another Bike Mission to Israel without hesitation.”