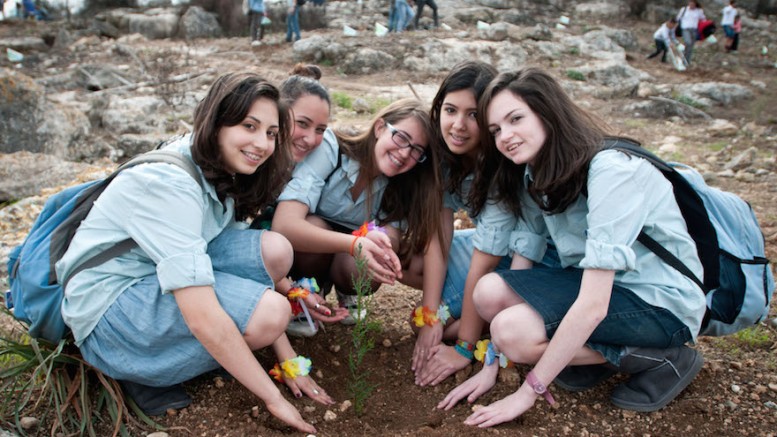 JERUSALEM (JTA) – The rabbinic tract Midrash Kohelet Raba tells us that when G-d created Adam, He took him to see each and every tree and plant, telling him to “make sure you do not degrade and spoil my planet – for if you do, there will be none to come after you and restore it.”

From the biblical injunction to protect natural woodland, even while laying siege to an enemy city, the rabbis of the Talmud derived the prohibition of gratuitous waste and destruction.

And the biblical story of Noah’s ark can be seen as the earliest recognition of humanity’s responsibility to safeguard bio-diversity from the consequences of human wrongdoing.

Protection of the environment is an authentic and significant Jewish value with deep roots in our tradition. So why isn’t the national movement of the Jewish people thought of in ecological terms as much as political ones?

There was a time when environmentalism was considered an integral part of the larger Zionist project. In Israel’s early days, planting trees, particularly on Tu b’Shvat, was an iconic Zionist activity. We still owe a great debt to the forestation projects undertaken by those early pioneers, both as forerunners to Israel’s world-renowned (and much sought-after) techniques of combat desertification and for its contribution to the ethos of “making the desert bloom.”

But from the point of view of contemporary conservationism, the mass introduction of insufficiently diverse, non-local cultivars is outdated. Moreover, over the years, “green Zionism” has declined in prominence, giving way to other causes and concerns.

There is no better time than Tu b’Shvat, the traditional New Year of the Trees that began on Sunday night January 24, to remind ourselves that safeguarding Israel is as much an ecological cause as a political one. It’s time to restore eco-Zionism to its rightful place in the fabric of Jewish life.

It begins with young American Jews, who must begin thinking of the fallow deer, the griffon vulture and the Arabian oryx as part of their patrimony just as they do the Western Wall and Masada. They must come to appreciate the complex challenges facing Israel in balancing environmental concerns with the needs of economic and social development, all within the constrained geographical limits of a tiny country. Finally, they must engage in ecological activism, whether it is rescuing sea turtles or reintroducing biblical wildlife species or preserving the fragile ecosystems of sand dune ridges.

Eco-Zionism can help advance other important social goals as well. It can foster deeper relations between Israeli experts and their colleagues overseas by sharing best practices and accumulated knowledge and expertise. Environmental education of young Israeli children, especially those from underprivileged backgrounds, can be a journey of empowerment: Respect for and dedication to Israel’s natural treasures can nurture a sense of responsibility and self-worth that make the difference between delinquency and civic virtue.

Similarly, joint Jewish-Arab youth activities in nature protection and ecology can break down barriers and foster coexistence – not only between the participants and the landscape that surrounds them, but also among the different communities that make up the tapestry of modern Israel.

No less important, in an increasingly polarized and divisive public sphere, where ideological fissures threaten to rend asunder longstanding bonds within and among Jewish communities, a renewed pledge to the survival of the landscapes and habitats with which the Jewish people has been collectively entrusted has the potential to create a sense of unity where there might otherwise be discord and strife.

Tu b’Shvat can be so much more meaningful than the exchange of dried-fruit baskets (typically imported from Turkey or Morocco). It can sound the rallying call for a renewed communion between the Jewish people and the land of Israel.

I believe this communion must be an important part of the future partnership between Jewish communities in America and in Israel, and it is an honor for me to call out to all those who would make it so.

(Shaul Goldstein is the director general of the Israel Nature and Parks Authority.)

Be the first to comment on "Op-Ed: Tu b’Shvat and the case for eco-Zionism"