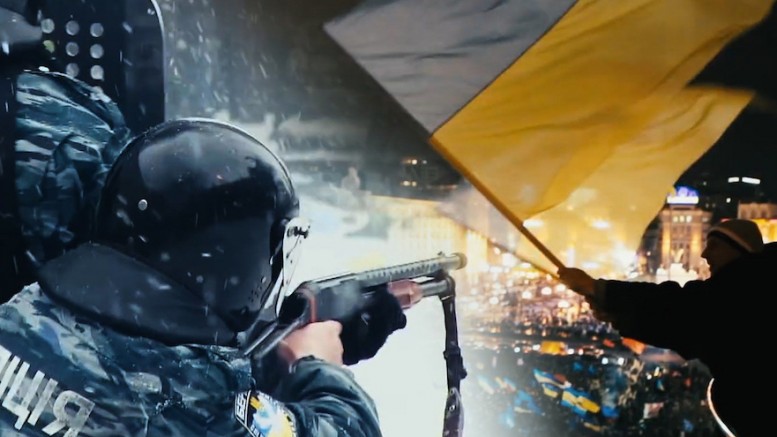 The Oscar-nominated documentary “Winter on Fire” documents the revolution in Ukraine in 2013-14. (Courtesy of Evgeny Afineevsky)

(JTA) — When Evgeny Afineevsky began filming his Oscar-nominated documentary about Ukraine’s revolution, he thought he was in for a fun project full of song and dance, oddly enough.

Afineevsky, a 43-year-old Russian-born director who served in the Israeli army, says his first days in Kiev in 2013 were “one big festival,” with people singing and playing musical instruments in Maidan, the square that was the birthplace of the upheaval.

Yet as the fighting intensified in the winter of 2013-14, Afineevsky found himself risking his life amid savage urban fighting that he documented in “Winter on Fire,” a Netflix production in contention for best documentary feature at the Academy Awards ceremony Feb. 28 in Los Angeles.

“When the bullets started flying, I saw the courage of the people around me who stayed, and realized I could not leave, either,” he told JTA.

Afineevsky, who has lived in Los Angeles since 1999, spent three months filming the urban battlefield where some 150 people died and thousands were wounded in a war that wound up toppling the government of President Viktor Yanukovych. Over the course of 97 minutes, the film offers a day-by-day account of the conflict’s escalation to the extreme violence that Ukrainian police used against protesters.

After Netflix purchased the film and offered it to millions of subscribers in dozens of countries in October, Afineevsky became something of a national hero in Ukraine. In November he received the Cross of Ivan Mazepa from President Petro Poroshenko, whose ascent to power in 2014 was precipitated by the Maidan protests.

As a Russian Jew, Afineevsky concedes he is not the obvious choice as spokesman for the Ukrainian revolution. Sparked by resentment over Russia’s creeping influence over the Yanukovych regime, the revolution was supported by many Ukrainian Jews who wished to see their country draw closer to Europe. But others opposed it out of concern that surging Ukrainian nationalism could provide a platform for anti-Jewish sentiment, a fear aggravated by the glorification of Nazi collaborators at Maidan as national heroes.

Despite the polarizing debate provoked by the uprising, Afineevsky, who launched his career in the movie business working with the late Israeli-born Hollywood producer Menahem Golan, says he tried to focus on the unity achieved at Maidan instead of the cultural fault lines it exposed.

“I saw and filmed Ukrainian imams, priests, Jews and nationalists working as one to build a better future for themselves and their country,” said Afineevsky, who served in the Israel Defense Forces for three years after immigrating to Israel in 1991 from Kazan, 450 miles east of Moscow. “As someone who comes from Israel, I think that message of solidarity is a sign we in the Middle East can also overcome ethnic and religious differences.”

“Winter on Fire” has many scenes that demonstrate Maidan’s role as a melting pot. But perhaps the film’s most striking element is its sequences documenting the wanton use of force by the Berkut, the black-clad special police units that Yanukovych unleashed on the protesters.

In one scene, six troops are seen brutally beating an unarmed man while he lies on the ground covering his face. As additional troops pass him, each officer pauses briefly to hit the man with his baton. The man eventually loses consciousness and is left for dead.

In another, a boy of 13 is seen participating in the revolutionaries’ fight against police, hurling stones at them as they respond with a volley of live ammunition.

“The brutality in ‘Winter on Fire’ puts into perspective attempts to demonize Israel as an oppressive regime bent on using force simply by showing what such an evil regime really looks like,” said Lati Grobman, the film’s co-producer and, like Afineevsky, a Russia-born Israeli-American.

“Winter on Fire” is hardly a balanced take on the events of 2013-14. It offers no insight into how the Berkut troops feel about being ordered to fire on their countrymen. Nor does it examine the participation of child combatants in the fighting or the massive involvement in the protests of the xenophobic Ukrainian far right.

And it faces stiff competition at the Oscars — not least from “Amy,” the acclaimed documentary about the British-Jewish singer Amy Winehouse, who died in 2011 of problems connected to her drug and alcohol addictions. Afineevsky is also up against “What Happened, Miss Simone?” — a film about the singer Nina Simone directed by the American Jewish filmmaker Liz Garbus.

“We are at a bit of a disadvantage at the Oscars,” Grobman conceded. “These other films are driven by stars with powerful, relatable personalities. Our only star is the Ukrainian people.”