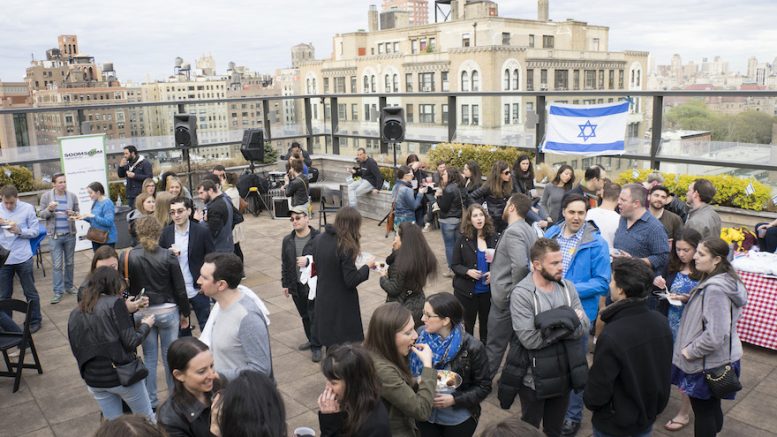 Participants in a past Shavuot program at the JCC Manhattan gather on the JCC’s roof. The JCC’s annual event lasts all night and features an array of classes and workshops. (Courtesy of JCC Manhattan)

Meaning: It gets no respect.

Considered by Jewish tradition to be on par with the fall and spring festivals of Sukkot and Passover, Shavuot is sometimes ignored because it is six days shorter — the holiday celebrating the biblical giving of the Torah at Mount Sinai is one day in Israel and two outside of it.

Shavuot, which this year starts on the evening of May 30, also lacks iconic, family-centric rituals. One of its only unique traditions is to stay up until dawn studying Torah on the first night. Because the holiday demands knowledge and stamina (or lots of coffee), it’s no surprise that pulling an all-nighter poring over the Talmud hasn’t become as widespread as, say, lighting a menorah.

But in recent years, synagogues and Jewish organizations across the country are trying to make the practice more accessible. Here are five ways American groups are reinterpreting the Shavuot all-nighter.

What if we celebrated Shavuot the way it is described in the Bible? That’s what a group at the Isabella Freedman Jewish Retreat Center in Connecticut is attempting to do.

At its Shavuot retreat, while there’s an option to study Torah on the holiday’s first night, there is also a group that will embark on a midnight hike meant to simulate Moses’ trek up Sinai to receive the Ten Commandments. Hikers will proceed silently, sans flashlights, to an overlook. Because it will be very dark, the three-quarters-of-a-mile trek will take approximately 2 1/2 hours.

In the morning, participants will gather for a parade of animals, fruits and grains meant to reflect the ancient Shavuot procession up to the Temple in Jerusalem, when farmers were commanded to give their first fruits as a tribute. At the retreat center, a herd of goats will be decorated with ribbons and shirts. Marchers, singing and dancing to a drumbeat, carry two large baskets — one with a challah, to represent wheat, and another with seasonal fruits.

“It’s exciting because we’re reviving what Deuteronomy says,” said one of the parade’s facilitators, Sarah Chandler, who also goes by the name Kohenet Shamira. “We’re going to decorate our animals. We’re going to bring the first fruits, and we’re going to make an offering.”

The Living Tree Alliance, a Jewish agricultural community that lives together on a 93-acre property in Vermont, will spend Memorial Day celebrating the lead-up to Shavuot by preparing for it like the Israelites did in the desert.

The group will hike on Mount Mansfield, the state’s highest mountain, stopping along the way for seven readings of poetry and other texts to reflect the seven divine attributes referenced in Jewish mysticism. Halfway up, they’ll stop for a Torah service at an interfaith chapel. Ambitious hikers will spend the afternoon scaling the mountain’s peak, 4,300 feet high, to engage in a worship service.

“Moses climbed Mount Sinai, so we wanted to get to a high mountain peak in Vermont,” said Living Tree program coordinator Stacey Oshkeloo. “Vermonters like hiking and connecting to nature, so it seemed like a great way to make the holiday accessible.”

If some people are taking Shavuot back 3,000 years, others want to make it relevant to the present, politically fraught moment. Sixth and I, a historic synagogue that has become a center for progressive Jewish activism, will be doing its Shavuot night learning program a week early — and it will be focused on Jews and Muslims in America.

The program, on May 22, will bring together Jeffrey Goldberg, the Jewish editor-in-chief of the Atlantic, and Duke University’s Imam Abdullah Antepli to discuss similarities and tensions between American Jews and Muslims. Antepli is also part of the Muslim Leadership Initiative, a Shalom Hartman Institute program that brings together young Muslim leaders to learn about Judaism and Israel.

The program will start with a buffet featuring Palestinian, Tunisian, Ashkenazi and Mizrachi — or Middle Eastern Jewish — cuisines. It will also include Muslim and Jewish evening prayer services, back to back, and a joint text study of Jewish and Muslim perspectives on revelation.

“If one of the things Shavuot is about is learning sacred texts together, struggling with difficult ideas together, sitting together for long periods of time — not just 140 characters of Twitter periods of time — we are taking all of that to this conversation,” Rabbi Stutman said. It’s a certain type of revelation that we are hoping for.”

Another contemporary take on Shavuot is Feminism All Night, in Oakland, California, which shifts the all-night Shavuot learning to the following Friday, June 2. Creator Hadar Cohen, who runs Pivot to Bloom, an organization advancing gender inclusivity in the tech world, organized the event because she felt there was a dearth of spaces focused on studying and discussing feminism. With this program, she is making that happen in a Jewish context.

At Feminism All Night, participants of all genders will have a Shabbat dinner and prayers, followed by feminist classes and studying from 10 p.m. to 4 a.m. Topics will include Jewish texts related to women’s rights, like how a Talmudic chapter on reparations can be applied to gender equality, as well as lessons on political activism and the intersection of gender and spirituality.

“There’s a lot of political urgency around how we decide to live our lives, and I think patriarchy has really kept us down in terms of that and has gotten us into some really bad habits,” Cohen said. “Being an intersectional feminist has shown me the way to heal out of that.”

What do you do if you have a lot of Jews living in the same neighborhood? In the Big Apple, two groups are doing big Shavuot all-nighters, with a range of Torah classes and plenty more.

The JCC Manhattan, which has had an all-night program each Shavuot since 2004, has a schedule so full it’s dizzying. Offerings include text study, dance workshops, yoga, film screening and meditation. On the roof, an installation by artist Tobi Kahn will reinterpret the mikvah, or Jewish ritual bath. And owing to the tradition of eating dairy on Shavuot, cheesecake and cookies will be offered.

“A deep value of our community is understanding and celebrating its diversity,” said Rabbi Joy Levitt, JCC Manhattan’s executive director. “We wanted to make sure that we were able to attract the widest number of people with a very expansive view of Torah.”

A similar program will happen across the East River, where Shavuot Across Brooklyn will bring together participants from the borough’s range of synagogues and independent prayer groups. Similar to the JCC array, sessions span from a “Free Minds Prison Poetry Workshop” to one on Hebrew slang.

The top-billed event is a book reading and discussion by the author couple Michael Chabon and Ayelet Waldman focused on their thoughts on a recent trip to Israel and the West Bank. The event is sponsored by Breaking the Silence, an Israeli veterans’ group that opposes Israel’s occupation.

“It’s a reflection of the reality of people’s interests,” said Matt Green, a rabbinic intern at Congregation Beth Elohim, the Reform synagogue in the Park Slope neighborhood that is hosting the program. “Many of the participants are familiar and conversant in Jewish texts, but a much greater number of people are not.”