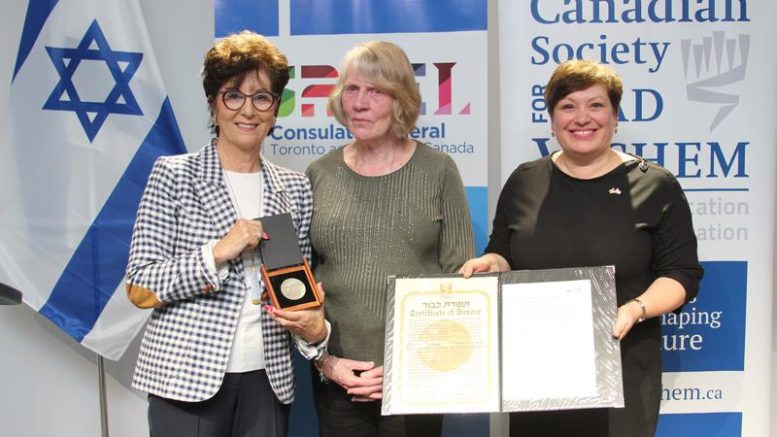 (EJNews) – Alberta resident Hannah Steynen was an honoured guest at the World Holocaust Remembrance Centre in Jerusalem last month to receive a prestigious award from the Consul General Galit Baram.

She accepted the award on behalf of her late parents Bart Rijpstra and Wytske Keverkamp.

The couple has been designated as being ‘Righteous Among the Nations.’

The ‘Righteous Among the Nations’ award is one of the most prestigious designations granted by the State of Israel. It is given to non-Jews who assisted Jewish people during WWII, often at great risk to themselves and their families.

On September 23, the Consulate General of Israel in Toronto and Western Canada in partnership with the Canadian Society for Yad Vashem was honoured to present this award to the late Dutch couple Bart Rijpstra and Wytske Keverkamp.

The story of the Rijpstra-Keverkamp family is a remarkable one and emblematic of the bravery of many who put their lives at risk to protect European Jews in a time of chaos. During the war, the family lived in the small town of Zaandijk in the north-west part of the Nazi-occupied Netherlands.

Bart Rijpstra belonged to a group of teachers who decided that they would hide and protect Jews from their Nazi persecutors. Those who were given shelter were often passed off as relatives, their true identities unbeknownst even to the young daughter Hannah (Hanneke).

Hannah’s parents did not speak much about their actions and it was not until many years later that she would discover that her home was part of a heroic life-saving network at this dark time in human history.

Remarkably, all of those who found refuge in the Rijpstra-Keverkamp household survived, and Hannah even managed to remain in touch with them after the war. She and her husband Leo immigrated to Canada in 1968, and settled in Lethbridge, Alberta, where Mrs. Steynen resides up to this day.

In a very moving ceremony, the award was accepted by Hannah (Hanneke) Steynen, on behalf of her parents Bart Rijpstra and Wytske Keverkamp. The medal and certificate were presented by Galit Baram, Consul General of Israel in Toronto and Western Canada, and by Fran Sonshine, National Chair of the Canadian Society for Yad Vashem. Since the ceremony was held in Toronto and not in Lethbridge, Mrs. Steynen’s hometown, members of the Toronto Jewish community, as well as Members of the Ontario Provincial Parliament, came out to show their deep appreciation for this noble act of human kindness.

Mrs. Steynen spoke about her family during that terrible period, bringing many in the audience to tears. During the ceremony, vocalist Aviv Cohen beautifully performed the Canadian and Israeli national anthems and violinist Ori Solomon presented a selection of classical music. Both artists were a fine representation of the young generation of Canadian Jewry.

The Consul General extended gratitude to all of the presenters who helped make the ceremony a success. Those who shared warm words of support and remembrance such as: Associate Minister of Mental Health and Addictions, The Hon. Michael Tibollo on behalf of the Ontario Government, Rabbi Meir Dubrawsky from the Yorkville Jewish Centre and Fran Sonshine the National Chair of the Canadian Society for Yad Vashem.

MPP Gila Martow and MPP Sam Oosterhoff beautifully recounted the story of the award recipients as well as those whom they saved. MPP Martow is a member of the Jewish community in Toronto and MPP Oosterhoff is the decendent of Dutch immigrants to Canada. They were therefore symbolic of both communities bring honoured. The support of colleagues from the Consulate General of the Kingdom of the Netherlands in Toronto was also appreciated.

Riipstra and  Keverkamp passed away in the mid and late 1980s. May their memory be cherished for generation to come.​