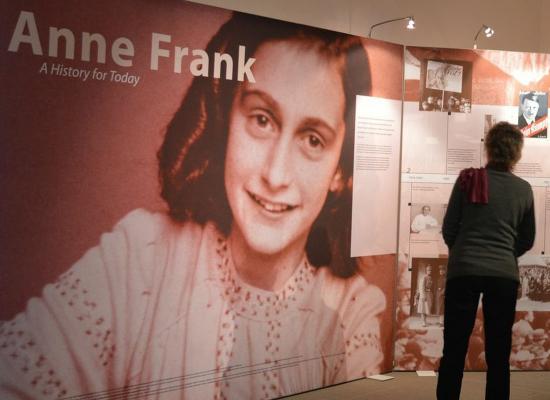 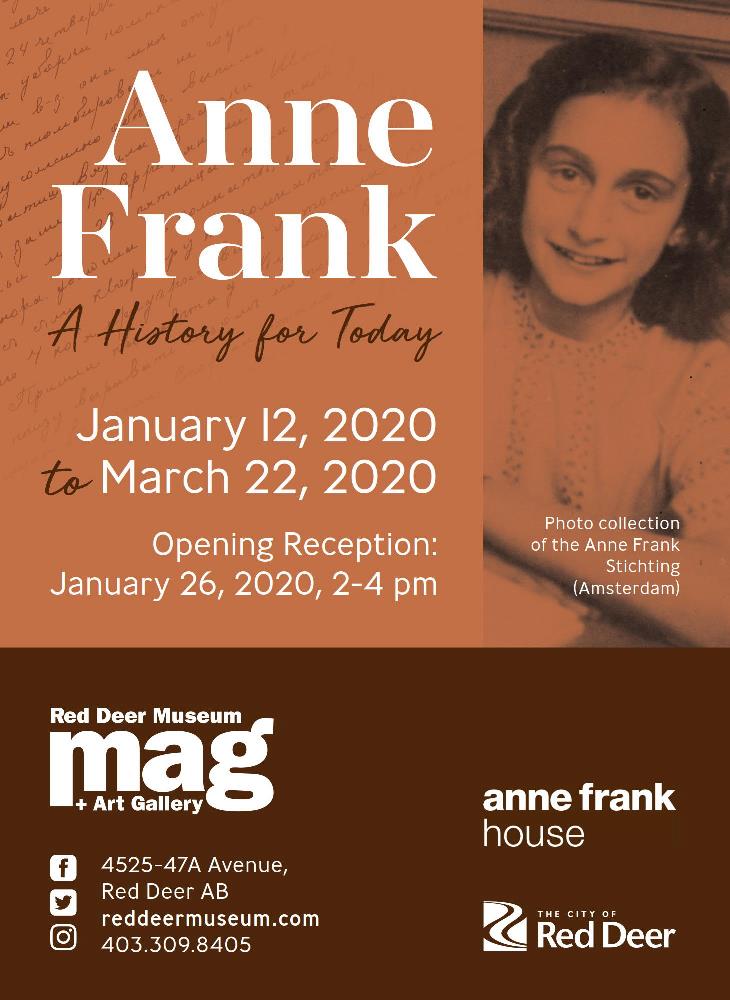 (Red Deer, AB) – The travelling exhibition Anne Frank – A History for Today, from the Anne Frank House (Amsterdam, The Netherlands), will be on display at the Red Deer Museum + Art Gallery (MAG) until March 22, 2020. Coinciding with International Holocaust Remembrance Day (January 27), a very special opening reception will be held at 2 pm on January 26 at the Red Deer MAG located at 4528 47A Avenue in Red Deer, AB. Also opening that day will be MAG’s in-house exhibit Sacrifice, Hope, Friendship: Canada and the Liberation of Holland.

Anne Frank – A History for Today is an emotionally powerful exhibit that aims to bring Anne’s life story to the attention of people all over the world to encourage them to reflect on the dangers of anti-Semitism, racism and discrimination and the importance of freedom, equal rights and democracy. As part of this exhibit the MAG will be showing artworks created by Red Deer high school students in response to the Anne Frank story.

“We are pleased to present this exhibition during the 75th anniversary of the Liberation of Holland from Nazi occupation,” says Lorna Johnson, Executive Director.

“The Diary of Anne Frank continues to be a moving testament to the optimism of youth in the most trying situations.

“The Anne Frank House Museum in Amsterdam has made a commitment to work with youth all over the world to eliminate racism and discrimination. We are pleased to bring their message to Red Deer and we would like to thank the teachers and students of Red Deer’s high schools who have embraced the project and created artworks for display, and who have volunteered to be tour guides in the exhibition.”

One of the major aims of the exhibition is to increase knowledge of youth and public on the historical events of the second world war, the Holocaust and the life of Anne Frank. It also fosters dialogue between attendees on topics such as the dangers of discrimination and the importance of tolerance and the human rights.

The exhibit also serves to increase the knowledge of local, national and international history through a variety of activities that are being held in conjunction with the exhibition, inviting youth and the public at large to live a learning experience of exchange and dialogue. Activities include virtual reality tours of the Frank House and a series of sessions entitled, Let’s be Frank: Teens tackling racism with videos.

A number of special guests will also participate with free sessions.

On February 2,  Marnie Bondar, a granddaughter of four Holocaust survivors, will be in attendance from 1 to 2 pm to provide a special presentation.  Marnie grew up well-fed on chicken soup and extraordinary stories of survival and heroism. A tight bond with her grandmother, Freda Plucer, remains to this day, and the two share a lifelong commitment to standing up to intolerance and discrimination. While Freda is no longer able to personally share her experiences from the Holocaust, including life in the ghetto and in the Auschwitz concentration camp, Marnie considers it an incredible honour to bring her grandmother’s history to today’s youth.

On March 1, Sylvie Hepner, a second-generation survivor will be in attendance from 1 to 2 pm to provide a special presentation. Both of Sylvie’s parents survived the Holocaust by hiding in France. She is a committed educator, having been a teacher and a school principal for the Calgary Board of Education, and continues educating through online teaching for the University of Calgary. After emigrating from France to Canada as a child, Sylvie encountered discrimination in Calgary. She works passionately to eradicate racism by recounting her family’s story of survival from the evil of Nazism.

In many countries Anne Frank has become the symbol of the mass murder of Jews during the Second World War.

She was born on 12th June, 1929 in Frankfurt, Germany, the daughter of Otto and Edith Frank and had a three year old sister, Margot. Just like many other Jews, the Frank family fled Germany after Hitler and his National-Socialist party came to power in 1933. The Jews who stayed in Germany were step by step excluded from society. The Frank family went to the Netherlands where father Otto started a company.

In May 1940 the Nazis occupied the Netherlands and soon anti-Jewish measures were introduced. In July 1942 large-scale deportations of Jews took place. The Frank family went into hiding along with four others. They hid in the annex of Otto Frank’s office building on the Prinsengracht in Amsterdam, right in the heart of the city. During their time in hiding, Anne Frank kept a diary. In August 1944 the hiding place was betrayed and the eight people were taken to different concentration camps.

Anne Frank eventually died in the camp Bergen-Belsen. Only Otto Frank survived the war. In 1947 the diary of Anne Frank was first published. By now it is translated into sixty languages and has become one of the best known documents about the Holocaust. The building where the Frank family hid is now a museum.

For more details regarding the exhibition Anne Frank: A History for Today contact Kim Verrier, Exhibitions Coordinator at kim.verrier@reddeer.ca, 403-309-8440. For the exhibition schedule visit reddeermuseum.com.

Be the first to comment on "‘Anne Frank: A History for Today’ on exhibit at Red Deer MAG until March 22, 2020"