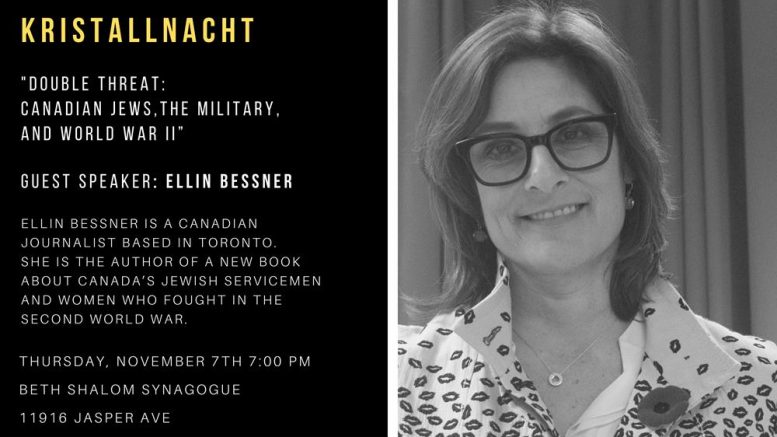 (Edmonton) – A Canadian author who wrote a compelling book about Jewish-Canadians serving in the Second World War will be in Edmonton on November 7 at a special memorial event commemorating the victims of Kristallnacht, the Nazi’s 1938 Night of Broken Glass. The Kristallnacht memorial service will take place at Beth Shalom Synagogue at 7 pm.

Click here to view our Photo Gallery from the event

Journalist Ellin Bessner is the author of “Double Threat: Canadian Jews, The Military and World War II.” In it, she tells the untold stories of how and why Canada’s small Jewish community sent thousands of men and women overseas to defeat Adolf Hitler and the Axis in the Second World War.

Bessner spent six years researching, travelling and interviewing more than 300 veterans and their families for her book. 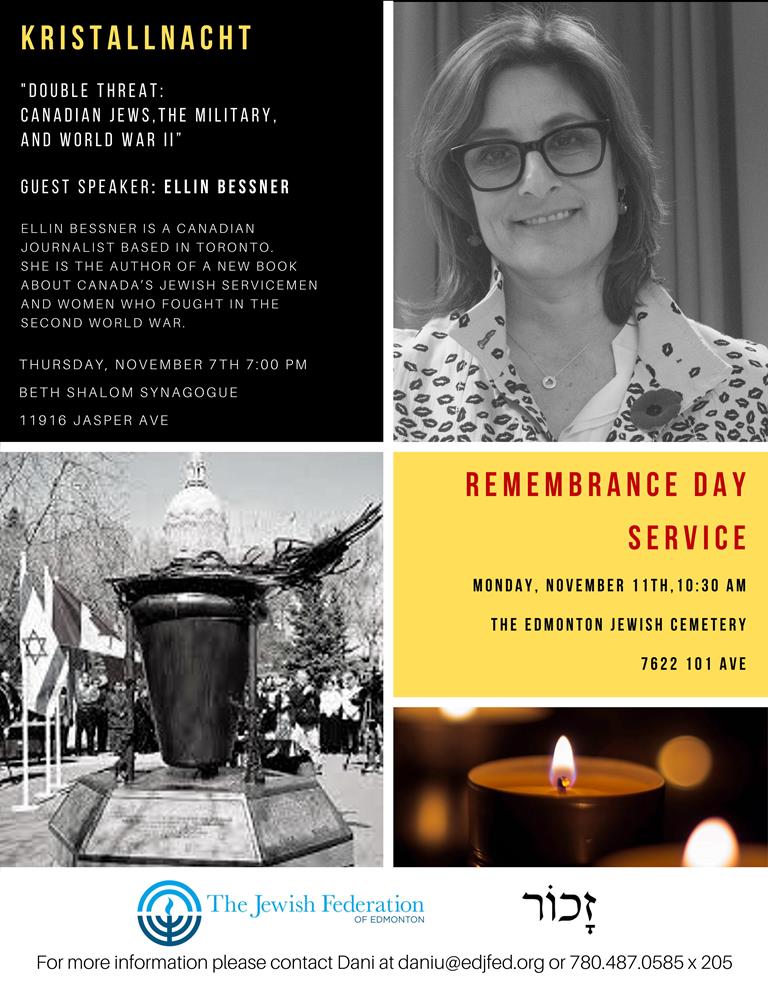 She says it’s important to remember the victims, but also the liberators: the Canadian soldiers, airmen and sailors who volunteered to put on a uniform, and go overseas to fight to defeat Hitler, and rescue the Jews of Europe from the Holocaust.

About 17,000 Canadians of Jewish faith were among those who helped their comrades win WWII, as Bessner writes in “Double Threat,” published by the University of Toronto Press. Yet these brave Jewish Canadian fighters also had to overcome widespread anti-Semitism both at home and on the battlefield, plus grave personal danger, should they fall into enemy hands and their Jewish religion be discovered.

Bressner tells an important Canadian story of courage and diversity that has never been comprehensively told before and fills an important gap in the publicly known accounts of how a country of volunteers helped win the war.

In 1945, the Second World War came to an end. For the Jews of Canada, this war was what the Prime Minister of the day, Mackenzie King, called a “Double Threat.”  He said Hitler was not only dangerous to freedom and democracy but was a threat to the very survival of the Jewish people as a race. In spite of this backdrop, or maybe because of it, Jewish Canadians enlisted in every branch of the service, and in the merchant marine. They fought and died in every major battle including Hong Kong, Dieppe, the Battle of Britain, the Battle of the Atlantic, North Africa, Ortona, D-Day, Falaise, the Scheldt, and throughout Northwest Europe, and in the Pacific.

You can find Canadian Jewish military graves from WWll, in all corners of the world, including the large cemeteries of Normandy, as well as in Germany, England, and Holland…plus in far-flung places such as Iceland, Ghana, Libya, and Crete.

On November 11, the Jewish Community will honour the local Jewish veterans and remember the fallen servicemen and women at a special Remembrance Day service at the Edmonton Jewish Cemetery (7622 101 Ave) at 10:30 am.

Be the first to comment on "Author to discuss role of Jewish-Canadians in battling the Second World War: Nov. 7"