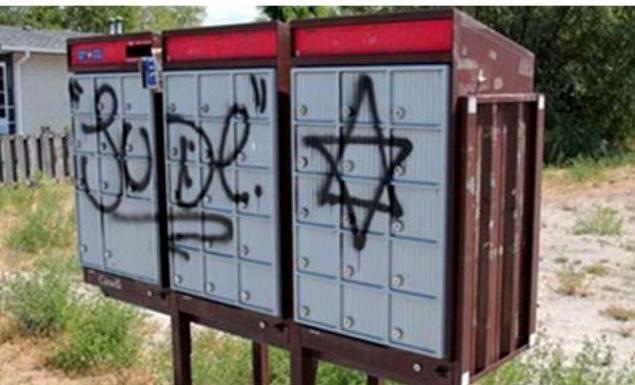 The year 2014 saw the highest number of anti-Semitic incidents ever recorded by B’nai Brith and the League for Human Rights. At 1627 incidents, this year saw a 28% increase over 2013. This is consistent with data gathered by other human rights organizations around the world, such as the Anti-Defamation League, who reported a 21% increase over the previous year.

“With the re-escalation of the conflict between Israel and Hamas, a landscape emerged which has helped legitimize anti-Semitism, via anti-Zionism, as a legitimate form of political protest,” said Michael Mostyn, CEO, B’nai Brith Canada. “Following the kidnapping and murder of three Israeli youths by the terrorist group Hamas, Operation Protective Edge was launched. Criticism of Israeli policies soon became a condemnation of the Jewish people as a whole, reigniting interest in misguided boycott movements. In many cases around the globe, attempts were made to justify virulent antisemitic attacks as support for anti-Israel ideology, despite the fact that Jewish people, and not the Israeli government, were the target.”

“When examining the incidents in 2014, a clear pattern emerged. It has become too easy to deny anti-Semitism, as long as it is reframed under the legitimizing veil of anti-Zionism. All one needs to do is look to the comment section of any major news site on a story examining the Israel-Hamas conflict. Almost without exception, legitimate debate and dialogue devolves to accusations of the murder of children, Zionist plots and the use of antisemitic language blaming the ‘Jews’. In fact, the yearly ‘Al-Quds Day’ Rally which is held on the grounds of Queen’s Park is a prime example of individuals who seek to blur the line between Israel and the Jewish people as a whole. While this year’s permits for the rally will be denied due to the Pan Am and Parapan American Games being held in Toronto, we remain concerned that permits for divisive hate-rallies may be considered by the Speaker of the Ontario Legislature in the future.

“That being said, it would be easy to allow the events of 2014 to convince Canadians that anti-Semitism has become an inevitable and insurmountable problem in this country. Canada’s government has been steadfast in combating the radicalization of Canadian youth, a phenomenon that is also anti-Semitic at its core. However government cannot act alone, and we must all stand united if we hope to stem the tide of rising anti-Semitism. It is our hope that by building societal bridges, we will encourage this open dialogue and a more tolerant society.”