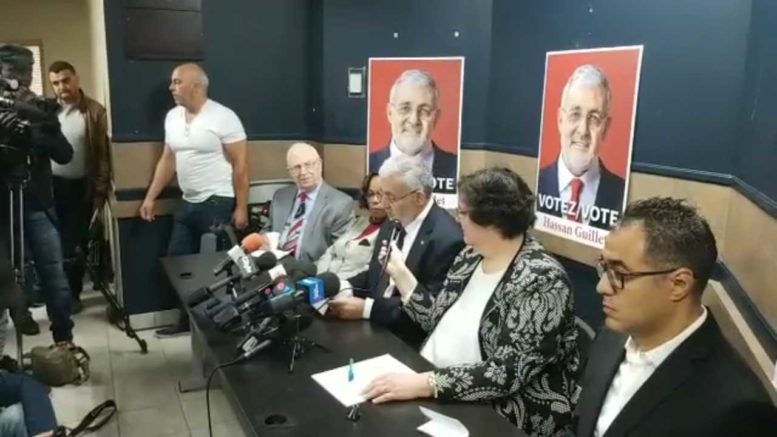 At the conference, which lasted about an hour, Guillet called on the Liberal Party to reinstate him as its candidate for the upcoming federal election in Saint-Leonard-Saint-Michel, and said he would consider running independently if rebuffed.

Notably, Guillet did not renounce or clarify any of his previous antisemitic statements, as revealed by B’nai Brith on Friday, August 30. He falsely claimed that Hamas-linked cleric Raed Salah was imprisoned for nine months for protesting restrictions at the al-Aqsa Mosque, when in fact, Salah was jailed for inciting terrorist attacks in Jerusalem.

Guillet also did not clarify whether he still thinks that Israel is an apartheid state, arguing that it was not relevant because he is running for office in Canada, not a foreign country.

“Today’s press conference only confirms our position that Hassan Guillet is not fit to carry the Liberal Party banner,” said Michael Mostyn, Chief Executive Officer of B’nai Brith Canada. “We are satisfied with our role in exposing his anti-Semitic statements, and disappointed that he spurned an opportunity to retract them.

“Mr. Guillet spoke of how his candidacy has inspired hundreds of people in Saint-Leonard-Saint-Michel, but what kind of example is he setting for them when he refuses to acknowledge his own public mistakes?”

Last week the Liberal Party swiftly revoked Guillet’s candidacy and issued a statement that read, “The insensitive comments made by Hassan Guillet are not aligned with the values of the Liberal Party of Canada.”

“Justin Trudeau and the Liberal team are strongly opposed to anti-Semitic, hateful, racist, Islamophobic, homophobic, sexist remarks and any form of discrimination,” the party said. “The Liberal Party condemns all forms of discrimination, and we always expect our candidates to do the same.”

Liberal members of parliament have also distanced themselves from Guillet.

“For past 4 years, Liberal Party has been a steadfast friend of Israel and has taken a strong stand against anti-Semitism in Canada and around the world. Mr Guillet does not represent these values,” Toronto’s York Centre MP Michael Levitt tweeted on August 30.