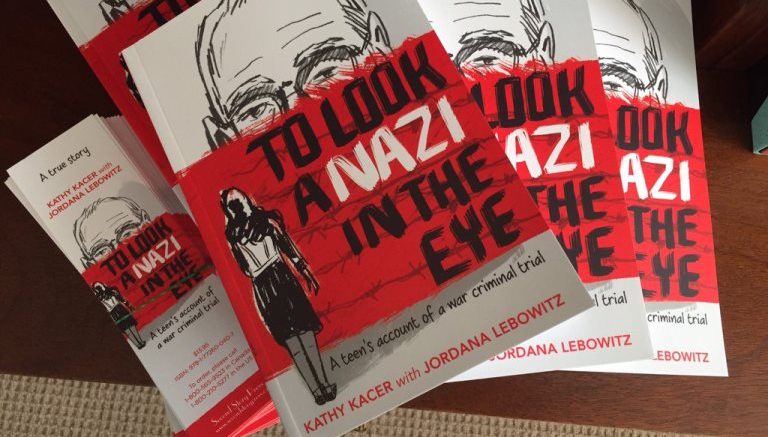 "To Look a Nazi in the Eye: A teen's account of a war criminal trial" is by Kathy Kacer with Jordana Lebowitz, Published by Second Story Press.

(EJNews) – “To Look a Nazi in the Eye: A teen’s account of a war criminal trial” is the true story of Canadian university student Jordana Lebowitz’s experience attending the war criminal trial of Oskar Groening. Groening worked at the Auschwitz concentration camp and became known as the “bookkeeper of Auschwitz.” In 2015 he stood trial in Germany for being complicit in the deaths of more than 300,000 Jews.

After traveling to Europe and visiting Auschwitz and other concentration camps as part of a March of the Living group, Jordana, a granddaughter of Holocaust survivors thought she knew a great deal about the Holocaust. But she was not prepared for what she would see and hear at Oscar Groening’s trial, including how such an ordinary seeming man – who at first glance reminded her of grandfather – could be part of such despicable cruelty. Listening to Groening’s testimony and to the Holocaust survivors who came to testify against him, Jordana felt the weight of being witness to history – a history that needs to be remembered now more than ever.

“To Look a Nazi in the Eye” is written as a narrative, by award winning author Kathy Kacer, a child of Holocaust survivors who has written several books for Second Story Press in the Holocaust Remembrance Series for Young Readers. The book, written with Jordana for teen and young adult readers, chronicles Jordana’s real experiences and conflicting emotions surrounding her trip to Germany for the trial of Oskar Groening.

Jordana struggles with the facts of the case when she realizes that Groening is not charged with killing anybody but rather aiding and abetting in the murders at Auschwitz. Groening too does not deny the horrors that took place but rather defends his role as very small.

In addition to the narrative which tells Jordana’s story, the book includes her actual blog posts that she wrote while attending the trial. These blogs provide additional insight into her experience and thoughts surrounding the trial.

The book also contains Groening’s testimony that the author has carefully reconstructed from BBC and other actual interviews. These testimonies provide yet another important and powerful layer to the book.

Jordana has the opportunity to spend time with a number of Holocaust survivors who she accompanies to the trial. The book presents their heart wrenching experiences, their will to survive, their view points on both forgiveness and the importance of consequences for evil doers.

“To Look a Nazi in the Eye” is an important book for classrooms in teaching youth about the atrocities that took place during the Holocaust. It also shows them the value of the March of the Living program which was the impetus for Jordana’s quest to bear witness.

By the time readers reach the end of the book, they will realize as Jordana does that the trial wasn’t so much about justice for the millions of Jewish people who were murdered, but about sending a message worldwide that hatred will not go unchecked. That there are consequences. That standing by and doing nothing in the face of evil is unacceptable. That young people must listen to the lessons of history and take an active role in making this world a better place.

“To Look a Nazi in the Eye: A teen’s account of a war criminal trial” (ISBN: 978-1-77260-040) was published by Second Story Press. It is recommended for readers between 13 – 19 years and is available at book stores and online book sellers.

Be the first to comment on "Book Review: ‘To Look a Nazi in the Eye’ by Kathy Kacer with Jordana Lebowitz"