(EJNews) – Canadian author Max Wallace conducted years of research and studied a cache of recently declassified documents that have resulted in a remarkable new book that shines a light on how the Holocaust ended. The book also debunks the myths that both the Vatican and the Orthodox Jewish community did little to help the war effort.

In his recently published book, “In the Name of Humanity: The Secret Deal to End the Holocaust,” Wallace, a New York Times bestselling author and Holocaust historian says that Nazi SS leader Heinrich Himmler was manipulated into ending the “Final Solution,” the Nazis’ plan to annihilate Jews, thus sparing the lives of as many as 300,000 Jewish people. What starts as a history book ends as a thriller in the race against time to save thousands of Jewish lives during World War II.

With great precision, Wallace documents the secret negotiations between Himmler, the architect of the Nazi genocide, and a Swiss rescue committee led by an Orthodox Jewish woman, Recha Sternbuch, and her husband Isaac. Together the Sternbuchs enlisted the former President of Switzerland, Jean-Marie Musy, to negotiate with Himmler to save the remaining Jews of Europe.

In autumn, 1944, with the Nazis facing imminent defeat, Musy and the Sternbuch committee – abetted by the Vatican and western intelligence – took advantage of Himmler’s desperate desire to forge a compromise peace with the West so that Germany and the Allies could turn against Stalin to defeat Bolshevism. 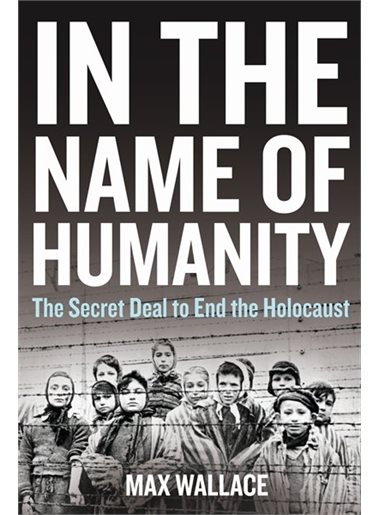 Cultivating his delusion, Musy met with Himmler in early November 1944 and convinced him that the Allies would be open to a separate peace with Germany but only if the Nazis ended the exterminations.

Wallace discovered a cable from the Sternbuchs dated November 20, 1944 in the archives of a New York-based Orthodox Jewish organization revealing that less than three weeks after meeting Himmler, Musy had secured a promise from the SS chief to “cease extermination in concentration camps.”  On November 22, a second cable reveals that the Vatican had received a promise that the “slaughters will cease.”  Three days later, Himmler ordered the destruction of the Auschwitz-Birkenau murder apparatus and issued a decree prohibiting “the further killing of Jews.”

Historians had long assumed the Nazis destroyed the crematoria and gas chambers to hide the evidence of their crimes ahead of the approaching Russian forces. But these cables – along with declassified documents discovered in the archives of the War Refugee Board – reveal that the order was almost certainly linked to these negotiations.

Wallace’s thorough research and well documented book effectively outlines the historical landscape of the era chronicling the events that led to Hitler’s rise to power, Jewish ghettos, Kristallnacht and the concentration camps that became the German killing machine, providing even the naïve reader with a solid understanding of the times.

It is a difficult book to digest but the historical context is essential. The narrative is personalized by a comprehensive description of the many people involved – on all sides of the conflict. Of particular interest is the story of Recha and Isaac Sternbuch, the Switzerland-based representatives of Vaad ha-Hatzalah, a rescue committee formed by the Union of Orthodox Rabbis of the United States and Canada in 1939 to promote and actively take part in the rescue of Europe’s Jews. Their (previously unheralded) heroic efforts are interwoven throughout the book and add to its readability.

The patient reader is rewarded in the last third of the book, which reads like a spy thriller documenting the hair raising secret deals, bribes and clandestine meetings (gleaned from archival records and historic testimonies) that culminate when Himmler and World Jewish Congress representative Norbert Masur finally meet face to face in April of 1945 during an arranged middle-of-the-night meeting at osteopath Felix Kersten’s villa in Germany. The result is a letter from Himmler that countermands Hitler and orders the cessation of all of the exterminations – in the name of humanity.

“In the Name of Humanity: The Secret Deal to End the Holocaust” is a superb example of a “hidden history” that is currently unfolding as classified documents become unclassified and as historians such as Max Wallace take the time to dig up the archives and connect the dots with the newly released information and personal testimony. It is an important book to read because it shows that history is not black and white, but that it can evolve as new material emerges. History also has a bad habit of recurring despite good intentions. Books like “In the Name of Humanity” remind us that the Holocaust was not actually that long ago, and that human rights atrocities and extreme forms of racism are still currently taking place. Individuals and groups from all walks of life can make a difference in the fight against evil.

Max Wallace is a New York Times bestselling author, journalist and filmmaker (“Who killed Kurt Cobain?” and “Muhammad Ali’s Greatest Fight”). From 1996-2000, Wallace worked for Steven Spielberg’s Shoah Foundation documenting the video testimonies of Holocaust survivors. He later served as the Executive Director of the Anne and Max Bailey Centre for Holocaust Studies. “In the Name of Humanity” (ISBN 13 9780670069590 and ISBN 10 0670069590) was published by Allen Lane/Penguin Random House Canada, in August 2017.

Be the first to comment on "Book Review: New Book reveals the secret deal to end the Holocaust"