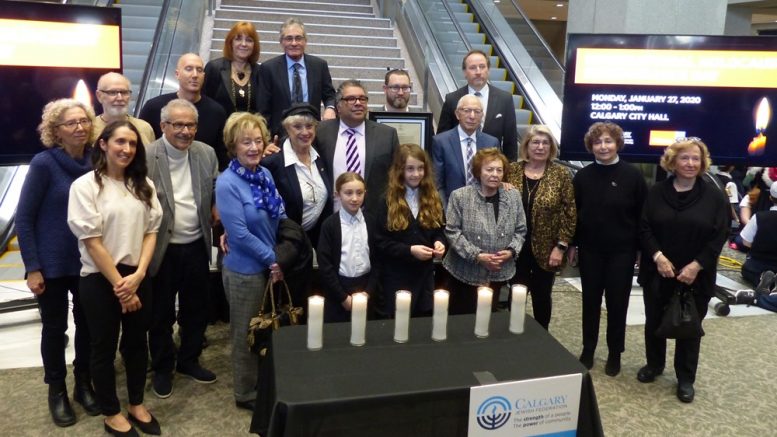 Participants in the City of Calgary Holocaust Remembrance Day commemoration on January 27, 2020, gather on the steps at the city hall atrium. Participants included Holocaust survivors and their descendants, members of the Jewish community, and representatives of Calgary Jewish Federation. Mayor Naheed Nenshi is shown in the middle. Top left is Councillor Diane Colley-Urquhart who was responsible for bringing a motion to city council to declare January 27 an official day of Holocaust commemoration in Calgary.

(AJNews) – For the first time, the City of Calgary officially observed International Holocaust Remembrance Day on January 27 with an emotional commemoration that drew hundreds of people to city hall.

This date was designated Holocaust Remembrance Day in 2005 by the United Nations. The date coincides with the liberation 75 years ago of the Auschwitz-Birkenau concentration camp by soldiers of the Soviet Union. Over one million Jewish people were murdered by the Nazis at Auschwitz out of a total of six million Jews killed in the Shoah. Many Polish civilians, Roma, people with disabilities and LGBTQ people were also murdered in the Nazi death camps.

The observance of the UN’s Holocaust Remembrance Day was made possible through the efforts of city councilor Diane Colley-Urquhart. Concerned that many Canadians, especially the youth, are unaware of the Holocaust, she put forward a motion that was adopted by city council last November to acknowledge January 27 as an annual city-wide day of commemoration. Calgary is only one of several municipalities in Canada to do so.

The observance at the city hall atrium was organized by Calgary Jewish Federation and coordinated by civic employees. A special Yad Vashem exhibit about the Holocaust was on display. Children’s choirs from both the Halpern Akiva Academy and the Calgary Jewish Academy performed for the occasion. Cantor Russell Jayne sang El Maale Rahamim, the prayer for the departed.

Dahlia Libin, a volunteer with Calgary Jewish Federation, and a third generation Holocaust survivor welcomed the audience. She talked about how her own grandparents – all four from both sides of her family – were lucky enough to survive.

“I am very moved and proud of my city today that we are remembering those terrible events.” She said it was critical to keep educating people about the evils of hatred and tyranny.

Holocaust survivor Sid Cyngiser, frail but still able, spoke about his personal experiences as one of those targeted for extermination by the Nazis. He was skin and bones when the war ended and he was liberated from the camps.

His mother and three younger sisters were murdered in the Treblinka concentration camp. His father had died of starvation.

Near death and abandoned by the world, Sid Cyngiser somehow managed to survive, met his wife to be – Bronia – also a survivor, and they managed to make it to Canada where they rebuilt their lives and became proud contributors to Canadian society.

Both Sid and Bronia have been very active over the years in Holocaust education efforts by digging into their personal pain to serve as witnesses so others will know exactly what actually happened in those dark years in Europe. They and other survivors serve as an inspiration for members of the Jewish community and others to embrace hope and combat hate and intolerance wherever it is found.

“I am so grateful to Canada for providing us a safe home,” Cyngiser said. “We all have a responsibility not to allow the seeds of intolerance and hatred to take hold in Canada.”

Mayor Naheed Nenshi built on the theme of sanctuary by reminding the audience that the work of inclusion, tolerance and understanding still goes on today.

“It is a solemn day, but we should also feel hopeful,” he said, “because we have all come together here at city hall, the living room of our community.

“We are here today to say that all people are safe here, you’re all welcome here. We have to keep recommitting ourselves to that struggle.”

Tyler Shandro, MLA for Calgary Acadia and Minister of Health, brought a message from the provincial government to declare that Alberta is a welcoming province that rejects anti-Semitism and stands with survivors, their families and friends to mourn, acknowledge this unfathomable crime, and to educate future generations about the Shoah.

Yannai Segal, president of Calgary Jewish Federation, said one of the significant things about the date January 27 and the liberation of Auschwitz is that the world finally saw and acknowledged for the first time the true extent of the Holocaust. Although Jews and others had been trying to tell the world for several years of the mass killings and atrocities, their pleas were largely ignored or not believed.

“Never again can we be blind to such evils,” he said. He stressed the importance of education about the Holocaust and other genocides.

Segal also expressed thanks to city of Calgary staff and staff and volunteers of Calgary Jewish Federation for creating a significant ceremony of observance.

One of the other speakers at city hall, Melanie Schmoll, carried on the discussion later in the day at the Calgary Jewish Community Centre to a standing room only crowd.

Dr. Schmoll said that because the Holocaust is such a deep, difficult and emotional subject, it can often frighten teachers.

Students can find the topic hard to deal with: for some it’s like talking about the Roman Empire or something that happened thousands of years ago that has no relevance today. In Germany there is an added problem that many parents are fatigued, they just don’t want to hear about these horrible aspects of World War Two.

Despite the challenges, Schmoll repeatedly stressed the importance of studying the Holocaust and its valuable lessons. She said that schools are important places where memory and culture are transmitted but that it is not only up to the schools – other institutions of society need to play a role to help create new values for a shared world.

In response to a question from the audience, Adam Silver, CEO of Calgary Jewish Federation, said a committee has been established to work with teachers, school boards and the provincial government to establish Holocaust education as a mandatory subject in the Alberta curriculum. He said he was hopeful the work would progress but there is no definitive outcome yet.

Calgary Jewish Federation on its own has a very active Holocaust education program. One of the pillars of the program is the Holocaust Education Symposium that it sponsors in partnership with Mount Royal University.

Richard Bronstein is a Calgary-based writer and former publisher of the Calgary Jewish Free Press.