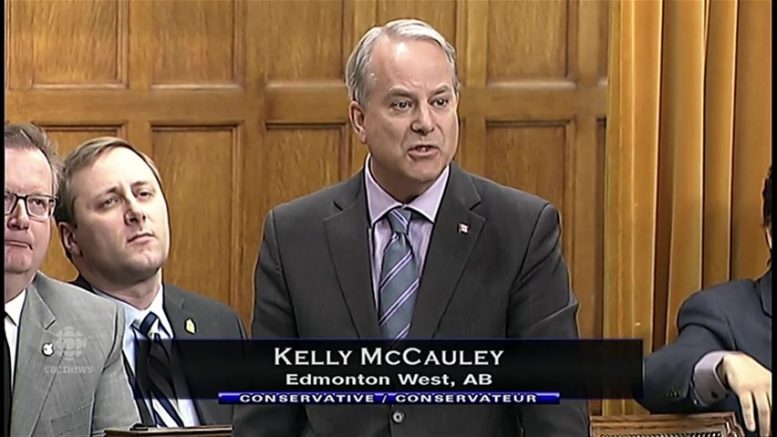 The motion passed on Monday February 22 in a 229-51 vote. Introduced the previous week by members of the opposition Conservative Party, the motion won support from the ruling Liberal Party as well.

It calls on the Canadian government to “condemn any and all attempts by Canadian organizations, groups or individuals to promote the BDS movement, both here at home and abroad.”

Speaking in favour of the Conservative Caucus’ motion to condemn the anti-Israeli BDS movement, Edmonton West MP Kelly McCauley said, “Israel is multicultural, multiracial, diverse and tolerant. This truth is the most powerful antidote to the apartheid lie. We’re devoted to aggressively disseminating this truth to everyone.”

“That, given Canada and Israel share a long history of friendship as well as economic and diplomatic relations, the House reject the Boycott, Divestment and Sanctions (BDS) movement, which promotes the demonization and delegitimization of the State of Israel, and call upon the government to condemn any and all attempts by Canadian organizations, groups or individuals to promote the BDS movement, both here at home and abroad.”

“Israel is among the freest and most democratic nations in the world. It is certainly the freest and most democratic nation in the Middle East,” said McCauley. “That is why our Conservative Caucus is putting forward this motion, a motion calling upon this house to support Israel by rejecting the Boycott, Divestment and Sanctions and condemning organizations that promote this ludicrous movement. As the only liberal democracy in the Middle East, Israel reflects the values and beliefs that us Canadians hold near and dear to our hearts.”

Speaking in favor of the motion last week, Foreign Affairs Minister Stephane Dion said “the world will win nothing for boycotting Israel but depriving itself of the talents of its inventiveness.”

In response to the debate, Shimon Fogel, CEO of CIJA, issued the following statement:

“A clear, all-party consensus rejecting the divisive Boycott, Divestment, Sanctions (BDS) movement was reaffirmed in the House of Commons today. One after the other, Members of Parliament spoke up in support of Canada’s friendship with Israel and spoke out against efforts to delegitimize, isolate, and discriminate against Israel by advancing the false idea that Palestinians bear no responsibility for the Arab-Israeli conflict.

“The boycott movement does not contribute to peace and is not pro-Palestinian. It is discrimination based on nationality, and it harms both Israelis and Palestinians alike by driving the two sides further apart. The BDS movement is a fringe movement and is outside genuine peace efforts that emphasize negotiation, fairness, and mutual responsibility.”

“We applaud our elected representatives for speaking out against BDS in the House of Commons today. There is clear agreement: BDS is hateful, divisive, and counter-productive.”

“The House of Commons vote is a great first step in recognizing the anti-Israeli Boycott and Sanctions Movement for what it is, another form of anti-Semitism,” said Michael Mostyn, CEO, B’nai Brith Canada. “The Anti-Israel boycott movement has no interest in actively helping Palestinian Arabs. Instead it seeks to demonize and delegitimize Israel and its aim is the annihilation of Israel and the Jewish people. Today on Canadian university campuses students are bullied and victimized by boycott activists. Students tell us they even fear that speaking out or questioning professors associated with the anti-Israel movement will hurt their academic careers.

“B’nai Brith thanks Tony Clement and Michelle Rempel for bringing this motion forward. We are also very appreciative of the many members who spoke out in support of this important issue. Unfortunately, some Members of Parliament, including Green Party Leader Elizabeth May and numerous MPs from both the NDP and Bloc Québécois parties have chosen to stand with a movement steeped in anti-Semitism.

“We urge the House of Commons, having passed this motion, to now take concrete steps to follow the lead of the United Kingdom and enact regulations to require all governmental bodies to abide by Canada’s obligations. This would prohibit all public authorities from imposing a boycott against any country, including Israel, signed up to the World Trade Organization government procurement agreement.”

Responding to the vote in a news release, the National Council on Canada Arab Relations said the anti-BDS motion goes “against the spirit of the Freedom of Speech, a right enshrined in Canada’s Charter of Rights and Freedoms.”

The group described BDS as a “nonviolent campaign that supports proven methods of conscientious objection to encourage Israel to respect international law.”