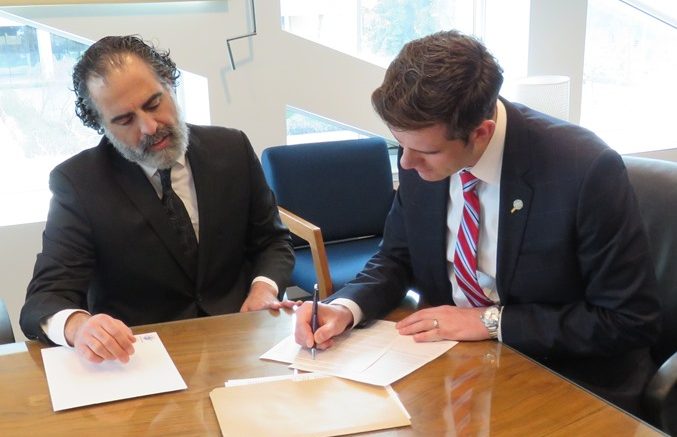 Rabbi Kliel Rose from Edmonton's Beth Shalom congregation sold his chametz to Edmonton Mayor Don Iveson as is the custom on Passover. Photo by Daniel Moser

(EJNews) – The traditional selling of chametz, before the start of Passover, to a gentile is a time honoured tradition in Judaism so that the removal of chametz does not burden anyone financially. This year Rabbi Kliel Rose, on behalf of his Congregation at Beth Shalom Synagogue, have entered into a chametz buying agreement with the Mayor of Edmonton, Don Iveson. 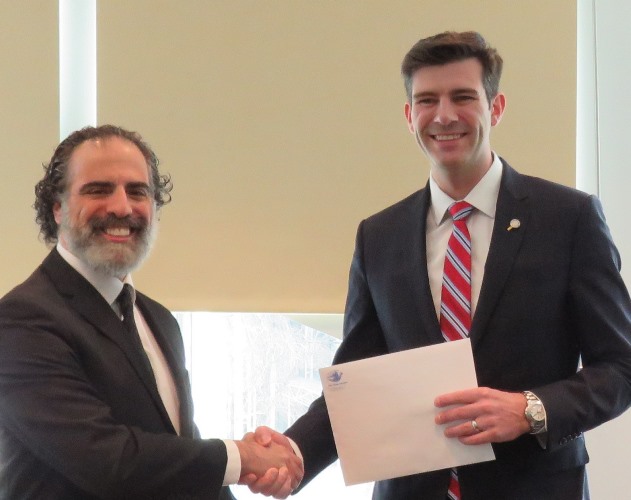 After the formal documents were signed for the selling of the chametz, Rabbi Rose and Mayor Iveson shook hands on the deal. Photo by Daniel Moser

In accordance with the tradition the Mayor’s Office purchased the chametz from Rabbi Rose for a loonie this morning, and the transaction will be reversed 8 days from now following the conclusion of Passover.

Jokes were exchanged, some that landed, others that didn’t and the transaction was sealed with a handshake and a signature. Although Mayor Iveson quipped that he had never gotten around to taking the LSAT, he was in litigious form examining each word of the contract carefully to make sure he understood the terms of the agreement.

Also in attendance were City Chaplain John Dowds, Councilor for Ward 5 Michael Oshry and members of the Mayor’s staff.

1 Comment on "Chametz for a loonie – Best deal in town"