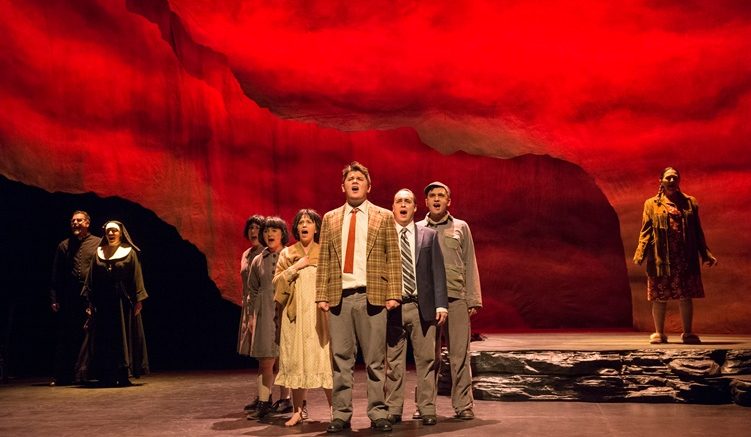 "Children of God" - which played at the Citadel Theatre in Edmonton earlier this month, offered a haunting look at Indian Residential Schools through the eyes of one family.

(EJNews) – The Citadel Theatre’s production of ‘Children of God’ by playwright Corey Payette is a haunting reminder that terrible human rights violations occurred against Indigenous families in Canada right up until the 1990s.

The musical production depicts a First Nation family being torn apart when the children are taken away to an Indian Residential School run by a pedophile priest who thinks he is doing G-d’s work by (among other things) hosing the children down to rid them of their language and culture. Even the unwitting nun who eventually recognizes the atrocities that are occurring at the school thinks the children should ask G-d for forgiveness for their part. That remark alone sent a chill up the collective audience’s spine. Those children and their families did not bring this upon themselves. They have nothing to apologize for – they are victims. They do not need to give reconciliation – they need to receive amends. But they also need to find the strength and the resilience to survive. This exceptional piece of theatre is a testament to that strength, resilience and spirituality.

This is an intense and moving production by Indigenous playwright Corey Payette and the cast is predominantly made up of Indigenous performers. The story unfolds in two-time periods. Present day Tom is a volatile man, estranged from his wife and kids and bitter towards his mother who he is staying with while he looks for a job. He encounters an old school mate which sends him spiraling back in time to their residential school experience.

The dual character portrayal of Tom / Tommy was excellent by Dillon Chiblow as he shifted back from one-time period to the other with a change of a hat and a complete change facial expression, speech pattern and gait. He was so believable in both time zones – first soft and naïve and then hardened by a life of disappointment.

The musical numbers were played live by a cellist, a violist, a guitarist and a pianist (musical director Allen Cole) and were exceptional in telling the story and setting the atmosphere. The students sang and the clergy sang along, believing that they too were somehow victims of the schools. The mournful song of Tommy’s sister Julia played by Cheyanne Scott evoked a heartfelt stream of tears to the eyes.

The portrayal of Rita, Tom’s mother by Sandy Scofield was also exceptional. Her anguish at not being allowed to visit her kids for 10 years and her bitter, flat demeanor as a mother of an adult survivor touched the audience to its core. She was robbed too. Her music was haunting and sorrowful and then uplifting, but all the time deeply spiritual.  Her drum beats and her chanting were transformative and cast a magic spell of hope on the audience.

‘Children of God’ tackles a difficult subject and a terrible time in our nation’s recent history. It is an exceptional production which should be seen by all Canadians – both Indigenous and non-Indigenous.

We in the Jewish community are familiar with addressing horrendous topics with a variety of platforms – including theatre, film, and novels both fiction and non-fiction. This is a stark reminder that we aren’t the only ones who have suffered historically. The Holocaust was a devastating genocide. Recognizing that the Indian Residential School Era was a cultural genocide of mammoth proportions right here in our backyard does not detract from our pain or our history. We should present as an understanding ally and should do what we can to promote Indigenous awareness and reconciliation efforts by the governments and by Canadian society at large.

Our declarations of ‘Never Again’ have fallen on deaf ears, as atrocities continue to take around the world and Indigenous peoples continue to struggle with basic rights in Canada. We need to recommit ourselves to tikkun olam in our own backyards.

Thank you to Citadel Theatre’s Artistic Director Daryl Cloran for bringing this thought provoking production to Edmonton and to Corey Payette for writing this powerful piece of musical theatre reminding Canadians to open their hearts, listen and learn about Canada’s shameful past and do what they can to ensure that Indigenous people are treated with respect and understanding.