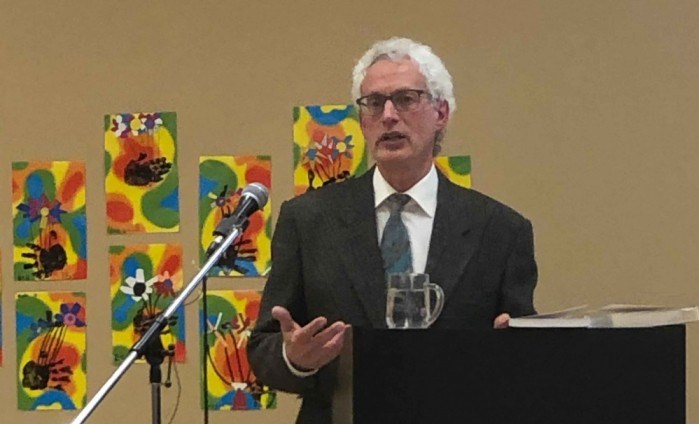 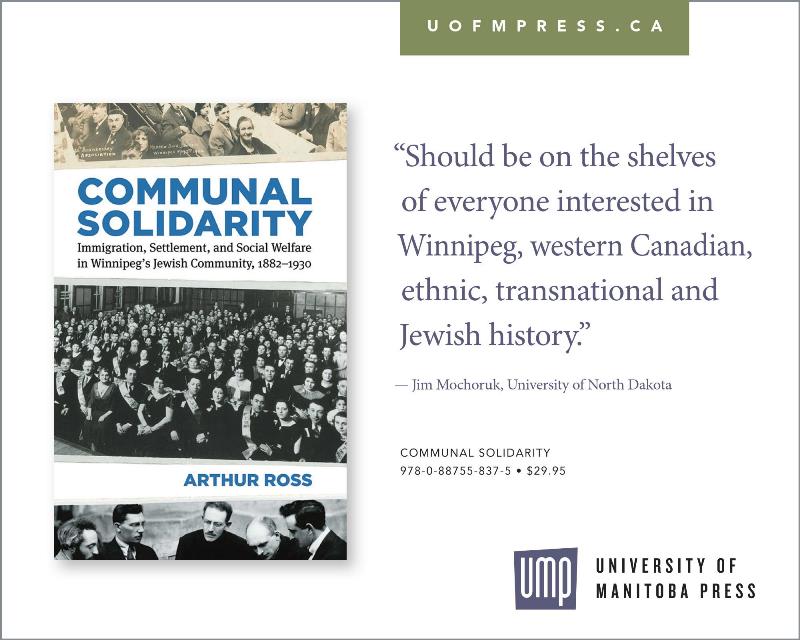 (EJNews) – Dr. Arthur Ross, a professor in the Politics and Public Administration Department at Ryerson University in Toronto, has recently published a comprehensive scholarly volume that promises to be of interest to Jewish historical enthusiasts, anyone hailing from Winnipeg’s North End, and those involved in organized community development.

In Communal Solidarity: Immigration, Solidarity and Social Welfare in Winnipeg’s Jewish Community, 1882-1930, Ross explores what it is to be culturally displaced necessitating the rebuilding of community, and the efforts undertaken post-immigration to unite.  Recently released by the University of Manitoba Press, the book provides insight into the formation of one of Canada’s most dynamic and historically influential Jewish communities.

In Communal Solidarity (ISBN: 978-0-88755-837-5) Ross goes beyond conventional scholarship and infuses a narrative flare for the unveiling of history, captivating a diverse audience.  The way he tells the story of Winnipeg’s Jewish community is gripping in its vividness as well as both stirring and moving for what it demonstrates about the power of the human spirit.

An academic through-and-through, Ross starts at the beginning, providing a detailed panorama of the societal, political and cultural catalysts in the Tsarist Russian Empire that precipitated a mass exodus of Jews fleeing government sanctioned anti-Semitism and oppression.   Descriptions of violent pogroms, reminiscent of the prose of Isaak Babel, illustrate how the Pale of Settlement, “a vast region of fifteen gubernii or ‘provinces’ comprising the western borderlands of the Russian Empire” (Ross 7), not only became a geographical territory of mandated persecutorial isolation, but also a place of restrictive poverty.

Ross’ examination of the sociocultural structure of day-to-day Jewish life in this pre-WWI period presents as both comprehensive and accessible.  He explores the nuances of both religious and secular philosophies of community and Jewish identity, and how these attitudes influenced emigration from Eastern Europe in the decades leading up to the Bolshevik Revolution.

The author not only explores the reasons behind emigration, but also the process of immigration in a way that brings the history to life in a personal and relatable way: “On 13 July 1912, fifteen days after departing from Antwerp, Belgium, the Canadian Pacific steamship Lake Michigan docked in Quebec City […] Miriam Epstein, aged twenty-three, accompanied by her twenty-one-year-old brother-in-law Leib, and her two children Israel (one and a half), and Feige (three months), informed immigration officers that they were joining her husband, Moishe, who had immigrated to Canada in June 1911 and settled in Winnipeg” (Ross 39).

Along with the necessary discussion of statistical data, political and economic events of note, and societal developments, Ross’ analysis is punctuated by more humanistic evidence serving to enhance his scholarly treatment with detail highlighting the experiences of those who lived the history.  As fellow prairie dwellers, many Edmontonian Jewish families themselves share ties with Winnipeg’s vibrant Jewish community, making Communal Solidarity: Immigration, Settlement, and Social Welfare in Winnipeg’s Jewish Community, 1882-1930, a particularly meaningful and enlightening read.  However, as Ross manages to emphasize, this is not simply a scholarly documentation of Winnipeg’s Jewish history, but a glimpse at a critical period in Canada’s cultural development overall.  Migratory movements westward necessitated the expansion of Canadian Railway operations.  Ross draws the reader’s attention to notable national developments such as this through the use of archival photographs to bring yet another layer of accessibility to his work.

Of primary concern to the author is the formation of community-based support systems – and for this, he focuses on the North End of Winnipeg as the epicenter of Jewish life for the area.  “Despite the obstacles that they faced, most Jewish immigrants and their children living in the North End succeeded in finding a means of earning an income” (Ross 71).

In a similar theoretical approach taken by prominent postcolonial theorists like Homi Bhabha, Ross demonstrates how at the initial stages of cultural displacement and relocation, language plays a critical role in the formation of social connection and support networks.

“The vast majority of Jewish immigrants who settled in Winnipeg proved to be resourceful and resilient.  Having experienced poverty in the Pale of Settlement, they were determined to take advantage of any employment or business opportunity in Winnipeg’s bourgeoning economy.  Despite language barriers, competition from the British Canadian workers preferred by Winnipeg’s major employers, skepticism and distrust of their qualifications, periodic recession, and pervasive discrimination against ‘foreigners,’ few Jewish workers were unemployed” (Ross 92).

The author attributes much of this success to the determination of the Jewish refugees who chose Winnipeg as their new home, but also on the community’s ability to unite in supporting recent arrivals.  Eventually, as Ross elaborates, such endeavours allowed for the infusion of new cultural developments:

“The Jewish immigrants who settled in Winnipeg after 1903 transformed the cultural, political, and organizational landscape of the Jewish community.  Drawing on their pre-immigration experiences, they took advantage of the opportunities provided by an evolving diasporic community to continue the activities that had invigorated Jewish life in the Pale of Settlement” (Ross 110).

The numerous archival images woven into the textual discussion serve to provide a visually tangible dimension to the remarkable achievements of Winnipeg’s Jewish community and its individuals.  A photograph of a group of people engaged in a rehearsal for a performance to benefit the Winnipeg Jewish Orphanage in 1918 highlights the diversity of approaches taken toward local charitable endeavors (Ross 157).  Yet another photo depicting a team of nurses attending to residents of Winnipeg’s Jewish Old Folks’ Home in the 1920s illustrates how expansive and universal Winnipeg’s network of Jewish community agencies became (Ross 167).

As a native of Winnipeg’s North End, the author treats his investigation of the city’s Jewish community’s formative years with a delicacy and respect that is both touching and celebratory.  Ross’ examination is objective in its scholarly perspective but should certainly be considered beyond inclusion in university reading lists.  His analysis is not only valuable for its contribution to national history, but also as a tribute to the solidarity and resilience of the Jewish immigrant who paved the way for the dynamic accomplishments and achievements heralded within contemporary Canadian Jewish society.

“Growing up in Winnipeg’s North End, I frequently went to the Mount Carmel Clinic on Selkirk Avenue to visit my mother, the executive director.  During my visits, I often looked at a framed collection of photographs of the thirty-two men and women who had served on the clinic’s board of director in 1929.  I was, of course, intrigued by their old-fashioned clothing, but I was also struck by their sense of purpose.  They were, my mother informed me, the men and women who had led a fundraising drive to build a ‘hospital’ to provide free medical care to members of the Jewish community” (Ross 245).

Examining community and the influence of support networks is an analysis that can be applied diversely.  As one considers the damage that can result from social ‘othering’, it becomes evident that documenting the efforts of Winnipeg’s Jewish inhabitant during this pivotal period showcases many admirable qualities of humanity in a way that should serve as inspiration.  Ross concludes stating that: “though the organizational landscape of Winnipeg’s Jewish community changed, the legacy of the generation of Jewish immigrants who embraced communal solidarity endured.  After the 1930s, communal solidarity evolved, but it continued to shape the development of social welfare in Winnipeg’s Jewish community” (Ross 244).