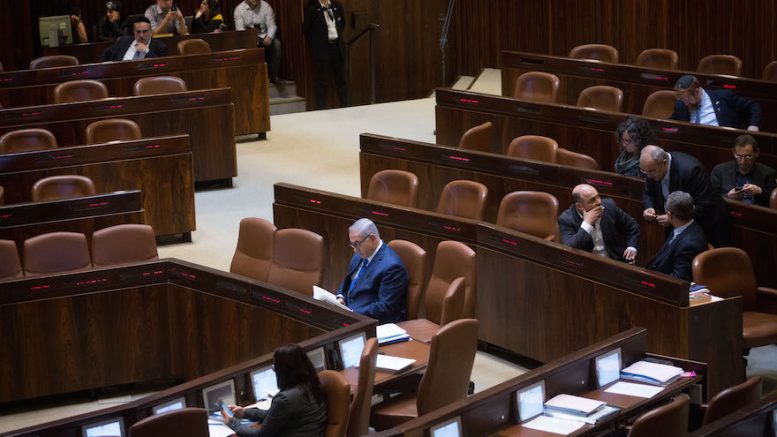 Israeli prime minister Benjamin Netanyahu seen during a plenum session in the Israeli parliament on March 12, 2018. Photo by Miriam Alster/FLASH90

JERUSALEM (JTA) — Israel’s attorney general likely will wait until after national elections to announce whether or not he will indict Prime Minister Benjamin Netanyahu in three corruption investigations, but the allegations could be central to the early elections.

Sources reported to be close to Avichai Mandelblit told Hebrew media including the KAN national broadcaster that Mandelblit has decided to wait to announce his decision in the cases known as 1000, 2000, and 4000 until after the early elections.

Israel’s ruling government coalition on Dec. 24 agreed to dissolve the government and go to early elections, currently said to be scheduled for April 9. The current government’s term was set to end in November.

But many Israeli news outlets are reporting that the corruption investigations are the real culprit in bringing down the government.

Kan reported on Tuesday that Mandelblit had been ready to announce his decisions in Cases 1000 and 2000, but that when he received the final police investigation into Case 4000 last month had decided to announce them all together, reportedly by mid-April at the latest. His office currently is reviewing the third police investigation, which runs more than 800 pages.

But Israel’s Justice Ministry said in a statement on Monday that its review of the investigation into the corruption accusations will go forward “as planned” and that the “orderly and professional process” is “independent of political events.”

Mandelblit served for three years as Netanyahu’s Cabinet secretary. He was appointed attorney general in 2016

The police have recommended Netanyahu be charged with bribery, breach of trust and other corruption charges in all three cases.

The corruption accusations are expected to figure large in the upcoming election campaign, with or without official charges being leveled.

A public opinion poll taken on Monday after the announcement of early elections found that Netanyahu’s Likud Party still would take the most Knesset seats, with 30, which is the same number of seats it currently holds. The poll, which considered the entry into the race of former IDF chief of staff Benny Gantz, was conducted by the Panels Politics polling agency for the Hebrew-language newspaper Maariv.

Netanyahu’s current ruling coalition currently has the narrowest of majorities with 61 seats in the 120-member Knesset, while Netanyahu currently also heads the foreign affairs, defense, and health ministries. On Monday he named a new immigrant absorption minister, a portfolio he also had held.

The prime minister is not required to resign from office if he is indicted, but only after a conviction and all appeals have been exhausted.

Leaders of several political parties, as well as newspaper columnists and political commentators have called on Mandelblit to accelerate the pace of his review and announce a decision on indictments before the elections.

Case 4000, considered the most serious and the strongest, alleges that Shaul Elovitch, majority shareholder of Bezeq, received political favors for the Israeli telecommunications giant in return for favorable coverage of Netanyahu on the Walla! news website owned by the company.

Legislation to dissolve the Knesset is expected to come up on a fast track-basis for a vote on all three readings on Wednesday. All bills currently being considered by the Knesset will be frozen once the representative body is dissolved.