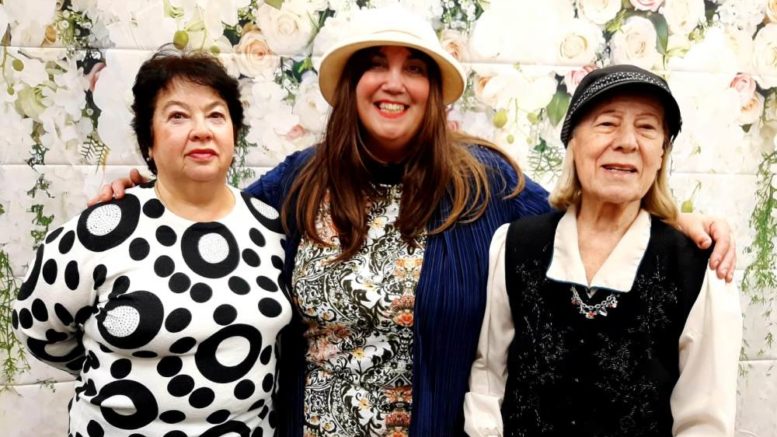 Rebbetzin Rifka honours Fira Kezhis and Riquette Sherman at the Crown of Creation Gala at Edmonton Chabad House on September 22.

Rebbetzin Rifka Drelich emceed the event, welcoming everyone who attended and describing the important work that Riquette and Fira do for the Chabad community. She said that it was her privilege to honour unsung heroes within the community who work tirelessly and unselfishly and are often unrecognized.

Rifka praised Riquette Sherman for her volunteer work at Beit Horim, at Edmonton hospitals and at numerous Chabad Functions. “She generously shares her musical talents on the piano, bringing joy to the listeners” and elevating any event she attends.

She praised Fira Kezhis for regularly volunteering her culinary talents for the Edmonton Chabad Friday night live program. “Her soup and knaidelach amongst other foods are now legendary,” said Rifka.

Before the meal was served, Riquette’s daughter Natalie Allouche thanked Rifka for the honour and described parts of her mother’s amazing background. Born in Paris, France, Riquette Staraselski graduated with honours from the Paris National Conservatory of Music. In 1952 she left for Israel with her parents and siblings and in 1954 she married Norman Sherman who was principal bassoonist with the Israel Philharmonic. In 1958 they moved to Winnipeg where their son Phillip was born and a few years later they moved to the Hague Netherlands, working for the Hague Philharmonic. Natalie was born there.

Back to Canada, Israel and then Canada permanently in 1974, Riquette was pianist for the Royal Winnipeg Ballet, involved with the Israel Philharmonic, played with the Winnipeg Symphony and in Kingston Ontario, had a long fulfilling teaching career at Queen’s University school of music and privately.

Riquette has performed countless concerts and events in Ontario and in Edmonton. She is well known for her performances of light popular music, Strauss Waltzes and Argentine Tangos. Norman z”l passed away in 2015 at the age of 91 after a full life. He is laid to rest in London Ontario. Riquette lives in Edmonton, close to her daughter and family. She is frequently called upon to play piano at community events. We are blessed to have a woman of her talents and generosity among us.

Fira’s daughter Julia thanked everyone for coming to the event to honour her mother. She noted that it was wonderful that she was being recognized for serving Chabad in her own unique way. She said that although she doesn’t live in Edmonton, she and her mother speak very regularly on the phone. “On the days when she does not pick up the phone, I know she is here at Chabad helping to prepare for a holiday or a kiddush or to cater a special occasion. When Rabbi Ari or anyone asks my mother for assistance, she always says yes.”

“My mother has always been a woman of strength and a very positive influence in my life and the lives of so many around her.”

“One of my earliest recollections of my mother is being at our summer cottage in Lithuania where she was born and raised. Next, I remember running through the streets to catch a train en route to Israel. I was told that we would be joining my aunts and cousins who were already in Israel. We were escaping civil unrest. I recall everyone running with tears in their eyes, but when I looked at my mother, she appeared so calm, unphased, strong and true and for this reason I was not afraid.

“And that has been my mother for my entire life. Everything she does, appears to be with strength and calm. During our weekly chats on the phone, my mother shares about all the time she spends at the Chabad House whether it is for a kiddush or just baking one of her famous and delicious cakes because someone asked her to. She does all these things with a great deal of passion and with love for all those around her.

“So tonight, on behalf of everyone here in attendance and those that couldn’t make it, I’d like to thank you, my mother, for all you do for us all. Thank you; I love you.”

Rebbetzin Rifka then led the group in Hamotzi and a wonderful meal was served.  Rabbi Ari dropped by to blow the shofar, much to the delight of all the women in attendance. Throughout the entire evening, Rebbetzin Rifka offered gentle affirmations to the group about living your best life and that no matter who you are, you should try to be better, kinder, more considerate and closer to G-d.

After the meal, Michal Shaposhnikov performed some lovely songs in Hebrew. Her beautiful voice filled the room with joy and everyone was entertained and even sang along where possible.

Michal is a fourth-year pharmacology student with a large passion for both the sciences and the arts. Born in Be’er Shevah, Israel she has extensive musical theatre experience having performed in shows throughout her school years. Her last show was in 2016 where she played the role of “Dorothy” and was nominated for “Best Actress in a Musical” award by the Edmonton Sun. Even though she is currently focused on completing her bachelor’s degree in pharmacology, she is looking forward to singing more and continuing to contribute her skills to the community.

Yasher Koach to Rebbetzin Rifka, and the honourees and their families as well as to Michal and everyone who attended the wonderful evening event.