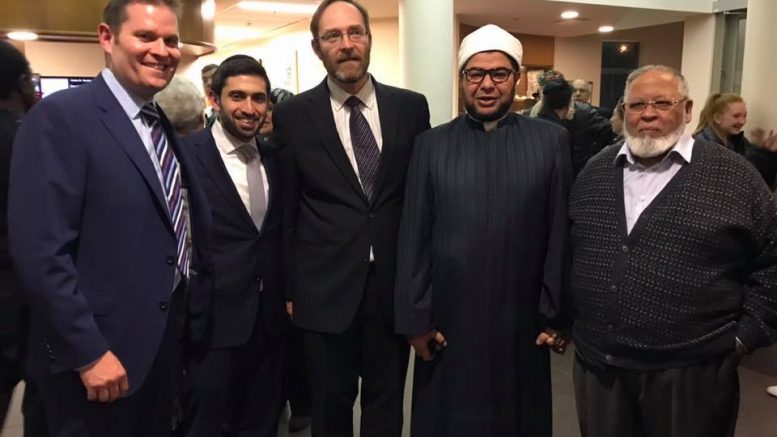 Leaders of Edmonton's faith communities joined Rabbi Zolly Claman, Edmonton Jewish Federation president Steven Shafir and caring community members from all faiths at a memorial service held on October 29 to honour the victims of the Pittsburgh synagogue attack and stand together against hate.

(EJNews) — On Saturday October 27, a gunman entered the Tree of Life Congregation in Pittsburgh and killed 11 people, wounding six others. It was the worst recorded anti-Semitic act in American history.  In killing 11 Jewish worshippers, he also struck at the heart of the world-wide Jewish community – and other faith based communities as well.

The Jewish world was heartbroken at the senseless racist brutality and the rest of the world shared in the loss and offered condolences, support and love.

Jewish communities across North America grieved and coordinated community memorial services to pay tribute to the victims and stand in solidarity. In Edmonton, a memorial service was held at Beth Israel Synagogue that attracted close to 500 people of all backgrounds, races and religions.

Edmonton Jewish Federation President Steven Shafir said, “We’ve come together tonight to remember the victims of a heinous anti-Semitic attack. I want to reach out and thank all those people within our community who have offered their support and comfort. I am grateful to the Edmontonians who have reached out to us and been proactive in ensuring us that there is no increased risk at this time; this has been very comforting.

“I’d also like to thank the City of Edmonton for their announcement that tonight the High Level Bridge will be lit in blue and white to remember the victims of the Tree of Life Synagogue shooting. Thank you to all the dignitaries who have attended this service tonight; we are very fortunate to live in a country that gives unwavering support.”

Many dignitaries were present at the service including Mayor Don Iveson, MLA Ricardo Miranda, Minister of Culture, MLA Lorne Dach, MLA Richard Feehan, Alberta Party Leader Stephen Mandel and others. There were also several leaders of local faith based communities in attendance.

Mayor Iveson said, “Tonight Edmontonians from all walks of life and faith communities have come together to support and pray for the Jewish community. We life in a safe city but we have to recognize that we are not exempt from hate crimes. We saw swastika graffiti this past summer and 2 synagogues were targeted with hate literature in the past year. However I am comforted by how many Edmontonians have stood up.  Now this memorial is an opportunity for us to draw strength and hope from one another. The Jewish community in this city has always stood up for others in need. I hope we can all find the strong and loving community that we have built here in Edmonton together. We need to choose each day, the words and actions to build a society that is inclusive, multicultural and diverse – to be an uplifting city for everyone. My friend the Mayor of Pittsburgh has said that Pittsburgh is stronger than hate and I can assure you that Edmonton is also stronger than hate. Faith is stronger than hate.  Love is stronger than hate.”

Minister of Culture Ricardo Miranda rose to the podium and pledged his solidarity and the provincial government’s solidarity with the Jewish Community. He said, “Hate has no place in a civil society. We stand together, all of us from all platforms and politics.”

A moving candle lighting service was held with eleven candles lit – one to honour each of the eleven victims of the shooting. Each candle was lit by a representative of a different Jewish group or institution in Edmonton. The whole service represents the coming together of the entire community.

Later on in the week, Minister Miranda rose in the Legislature and recited Mourners Kaddish for the 11 victims of the Pittsburgh shooting.  He said, “Our deepest condolences to the family, friends and to all those affected by the synagogue shooting, the horrific murder of eleven people in Pittsburgh over the weekend, said to be the worst attack on Jews in the history of the United States.

“Our hearts break for the Jewish community in Pittsburgh and we stand united with Jewish people around the world. Let it be said: No one should have to worry about their security when they go to their place of worship. No family should have to worry that their loved ones might not make it home because of where or how they pray.

“As a father and as a member of the Jewish faith, I am utterly heartbroken by this vile act. To the Jewish community of Alberta, my sisters and brothers, I stand with you, our government stands with you and I know everyone in this house stands with you as we all grieve.

“We must not allow hate and intolerance to divide us. Our government will not allow the rise of anti-Semitism, that we have seen elsewhere in the world, to flourish in Alberta. The fact that this has to be said in this day and age is deeply troubling.

“All of us must continue to denounce hate. As the premier said yesterday, anti-Semitism is a dark reality that must be confronted directly. It has no place in a civil society. We must continue to ensure that Alberta is a place of welcome for all peoples and all faiths, where there is no room for hate. And we will continue to ensure that Alberta is a place where our Jewish community, who has helped build this province, can go about their daily lives and practice their faith in safety and solidarity.”

The American Jewish Committee urged Jews — and non-Jews — to come to synagogue the following Shabbat in response to the shooting.

The organization called on elected officials, civic leaders and others to join Jews at services as part of the #ShowUpForShabbat campaign.

“What could be a more fitting response to the terror in Pittsburgh?” AJC CEO David Harris said in a statement. “We are not afraid. We are not going to think twice about affirming our identity and faith. We are not alone.”

“The community of conscience must stand as one, whether in the face of the hate-motivated attack against a black church in Charleston, which took nine lives, or a synagogue in Pittsburgh, which took 11 lives,” said Harris. “We are determined to ensure that love triumphs over hate, good over evil, unity over division. That’s our America.”

The synagogues in Edmonton and other major Canadian cities joined in the #ShowUpForShabbat solidarity campaign.