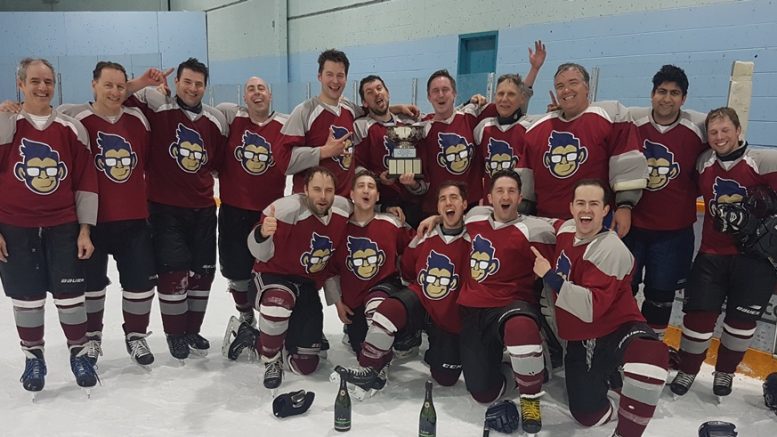 (EJNews) – After a hard fought three game playoff series a new champion has been crowned in the Edmonton Jewish Hockey League, EJHL Red. Led by Captain Adam Zepp and leading scorer Liam Muscat, EJHL Red was able to defeat EJHL Green to earn the right to raise My Son Stanley’s Cup. Featuring the Owen brothers on line 3 and the Muscat brothers on line 1, EJHL Red’s family spirit and tenacious playing style served them well and having the opportunity to dethrone the 2018 champions was a perfect cherry on top of a fantastic season.

EJHL Green took the path less travelled to the finals this season. After taking the trophy home last year, Green struggled at times this season with a bit of a championship hangover finishing 4th in the regular season. Green, led by Mario Morin refused to allow their standings finish to define their team, defeating the first place and favoured HeAtBaGs in a stunning and entertaining two-game series, followed by a series deciding shootout.

Seeing their window to win was open, EJHL Red grabbed the horse by the reins, and demanded to be heard, a team loaded with veteran talent they came into the finals prepared for victory. Notable holdovers from their previous championship season included Drew Hanson and Daniel Shafran on line 2, both players have a real nose for the net, and are not afraid to dig deep in the corners and win important puck battles in the offensive zone.

Colin Muscat, in the second year of his second stint in the Edmonton Jewish Hockey League, was seemingly rejuvenated by getting the opportunity to play in front of his hometown fans, and on a line with younger brothers Dylan and Liam. The elder Muscat almost tripled his scoring output from last year coming close to duplicating his 2009 outputs with the ACME Scrappers.