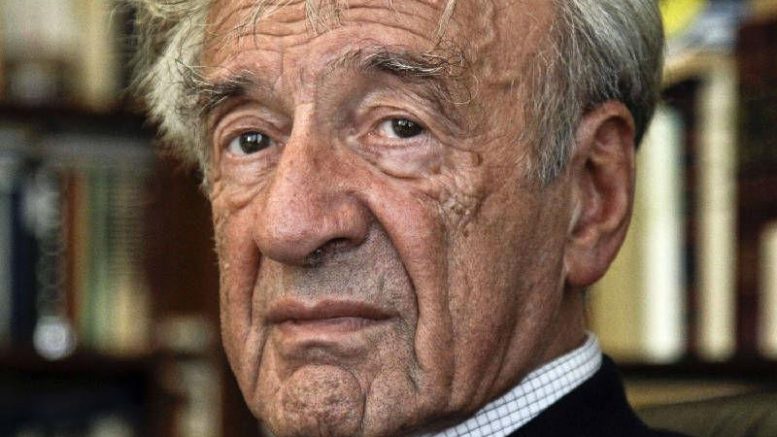 Elie Wiesel, revered around the world for his human rights advocacy, died on Saturday July 2 at the age of 87.

WASHINGTON (JTA) — Elie Wiesel, the Holocaust survivor and Nobel laureate who became a leading icon of Holocaust remembrance and a global symbol of conscience, died Saturday July 2 at 87. His death was the result of natural causes, the World Jewish Congress said in a statement.

A philosopher, professor and author of such seminal works of Holocaust literature as “Night” and “Dawn,” Wiesel perhaps more than any other figure came to embody the legacy of the Holocaust and the worldwide community of survivors.

“I have tried to keep memory alive,” Wiesel said at the Nobel Peace Prize ceremony in 1986. “I have tried to fight those who would forget. Because if we forget, we are guilty, we are accomplices.”

Often he would say the “opposite of love is not hate, it is indifference.”

The quest to challenge indifference was a driving force in Wiesel’s writing, advocacy and public presence. Though he considered himself primarily a writer, by the end of the 1970s he had settled into the role of moral compass, a touchstone for presidents and a voice that challenged easy complacency about history.

Wiesel spent the majority of his public life speaking of the atrocities he had witnessed and asking the public to consider other acts of cruelty around the world, though he drew the line at direct comparisons with the Holocaust.

“I am always advocating the utmost care and prudence when one uses that word,” he told JTA in 1980.

President Barack Obama, who met frequently with Wiesel and took his counsel, said he had been a “living memorial.”

“Along with his beloved wife Marion and the foundation that bears his name, he raised his voice, not just against anti-Semitism, but against hatred, bigotry and intolerance in all its forms,” Obama said in a statement. “He implored each of us, as nations and as human beings, to do the same, to see ourselves in each other and to make real that pledge of ‘never again.'”

Israeli Prime Minister Benjamin Netanyahu said Wiesel was “bitterly mourned” by the State of Israel and the Jewish people.

“Elie, the wordsmith, expressed through his extraordinary personality and fascinating books the triumph of the human spirit over cruelty and evil,” he said in a statement.

Wiesel won a myriad of awards for his work, including the Presidential Medal of Freedom, the Congressional Gold Medal and the National Jewish Book Award. “Night” is now standard reading in high schools across America. In 2006, it was chosen as a book club selection by Oprah Winfrey and, nearly half a century after it was first published, spent more than a year atop the best-seller list. He would also take Winfrey to Auschwitz that same year.

Writing for The New York Times Book Review in 2008, Rachel Donadio said “Night” had become “a case study in how a book helped created a genre, how a writer became an icon and how the Holocaust was absorbed into the American experience.”

“There is no way to talk about the last half century of Holocaust consciousness without giving Wiesel a front and center role,” said Michael Berenbaum, a professor at the American Jewish University in Los Angeles and former director of the U.S. Holocaust Memorial Museum’s research institute. “What he did, extraordinarily, was to use the Nobel Prize as a tool to call attention to things, and as a vehicle to scream louder, shout more, agitate more.”

Born in the town of Sighet, Transylvania, then and now a part of Romania, in 1928, Wiesel was deported to Auschwitz in 1944 with his family when he was 15. His mother and one of his sisters would disappear forever when the family was forced aboard the cattle cars, murdered immediately. His father, who traveled with him to the camps, died of dysentery and starvation in Buchenwald before liberation. Two sisters would survive the war.

In “Night,” Wiesel describes pinching his face to see if he is dreaming when he sees the murders of infants.

“In those places, in one night one becomes old,” Wiesel told NPR in 2014. “What one saw in one night, generations of men and women had not seen in their own entire lives.”

Wiesel was liberated from Buchenwald in 1945. He went on to study at the Sorbonne and moved to New York at the end of the 1950s, where he lived in relative obscurity. He worked hard to find a publisher for “Night,” which initially sold poorly.

“The truth is in the 1950s and in the early 1960s there was little interest and willingness to listen to survivors,” said Wiesel’s longtime friend Rabbi Irving “Yitz” Greenberg, who had read a copy of “Night” in Israel in the early 1960s. “In 1963, someone told me this author is alive and well in New York City and I somehow managed to find him and go see him.”

Wiesel was “gaunt” and “working as a freelance reporter, a stringer, for a French newspaper, an Israeli newspaper and a Yiddish newspaper — and for none of the above was he making a living,” Greenberg said.

“He had this magnetic presence,” the rabbi said. “He was quiet but with tremendous force and he felt the vividness the Holocaust had a message.”

In the late 1960s Wiesel finally began to emerge as one of the preeminent voices in Holocaust literature. By the end of his career he had written some 50 books.

In 1972, he enthralled Yeshiva University students with his excoriation of the American and American Jewish leadership for its silence during the Holocaust.

How many Jewish leaders “tore their clothes in mourning?” Wiesel asked. “How many marched on Washington? How many weddings took place without music?”

His 1966 book reporting the plight of Soviet Jews, “The Jews of Silence,” made possible the movement that sought their freedom.

“Elie Wiesel was the collective moral compass of the Jewish people,” Natan Sharansky, who became the face of the Soviet Jewish struggle, said in a statement with his wife, Avital, who with Wiesel led advocacy for Sharansky’s release from prison.

“He was the first to break the silence surrounding the plight of Soviet Jewry, and he accompanied our struggle until we achieved victory,” said Sharansky, who is now the chairman of The Jewish Agency for Israel. “We will miss him deeply.”

In 1978, Wiesel became the chairman of the Presidential Committee on the Holocaust, which would ultimately recommend the building of a Holocaust museum in Washington. As his public presence grew, he began to visit the sites of other genocides. In 1980, he traveled to Cambodia. In an interview with JTA, Wiesel called the Cambodian refugee camps “spectacles of horror” and noted, “That these things could happen again simply means that the world didn’t learn — or that the world didn’t want to learn.”

In 1985, Wiesel’s reputation grew beyond the Jewish world when he challenged President Ronald Reagan on live television over his intention to visit a German cemetery that housed the remains of Nazi soldiers. In the Oval Office to receive the Congressional Medal of Achievement, Wiesel chastised Reagan.

“This is not your place, Mr. President,” Wiesel famously said. The president visited the cemetery anyway, but changed his itinerary to include a visit to the Bergen-Belsen concentration camp.

Wiesel challenged the White House again in 1993 when he charged the newly inaugurated President Bill Clinton to do more to address the atrocities then unfolding in Yugoslavia.

“He saw people would listen to him,” said Stuart Eizenstat, who held senior positions in multiple presidential administrations and was a key figure in the negotiation of Holocaust restitution agreements with several European governments.

“He became more aggressive about showing that it is not just the Holocaust, but applying lessons to rest of the world as well,” Eizenstat said. “He became more active in other genocidal or world conscious issues. He wanted to use that power for the cause not just of Holocaust memory, but also to prevent genocide.”

At the inauguration in 1993 of the U.S. Holocaust Memorial Museum, Wiesel said, clearly, “I don’t believe there are answers. There are no answers. And this museum is not an answer; it is a question mark.” That question mark he applied to global atrocities, as well as historical ones.

His later years saw him wade into politics. He was friends with Obama but also loudly chastised the president for calling for an end to settlement construction and for brokering the Iran nuclear rollback-for-sanctions-relief deal, positions that led to criticism, even from longtime admirers. His very public support for Netanyahu was also questioned. Peter Beinart, writing in Haaretz, said: “Wiesel takes refuge in the Israel of his imagination, using it to block out the painful reckoning that might come from scrutinizing Israel as it actually is.”

The final years of his life also saw financial turmoil. His personal finances and $15.2 million in assets of the Elie Wiesel Foundation for Humanity were invested with Bernie Madoff, who was convicted in 2009 of fraud. Wiesel’s fortune and the reserves of his organization were wiped out.

Yet he did not cease his work. Just months after the Madoff scandal broke, in June 2009, he led Obama and German Chancellor Angela Merkel on a trip to Auschwitz, where he noted he was at his father’s grave. Wiesel then gave a searing indictment of the world’s continued inability to learn.

“As a public figure who was also the very symbol of the Holocaust survivor in America, Wiesel acted as a moral compass, his personal history lending unequaled gravity to his public remarks on genocide, anti-Semitism and other issues of injustice worldwide,” said Ruth Franklin, author of “A Thousand Darknesses: Lies and Truth in Holocaust Fiction.” “Wiesel never pretended that he understood the Holocaust. He spoke of it as a horror beyond explanation, a black hole in history. As the virtual embodiment of the catch phrase ‘never forget,’ he did more than anyone else to raise awareness of the Holocaust in American life.”

Along with his wife, Wiesel is survived by a son, Shlomo.