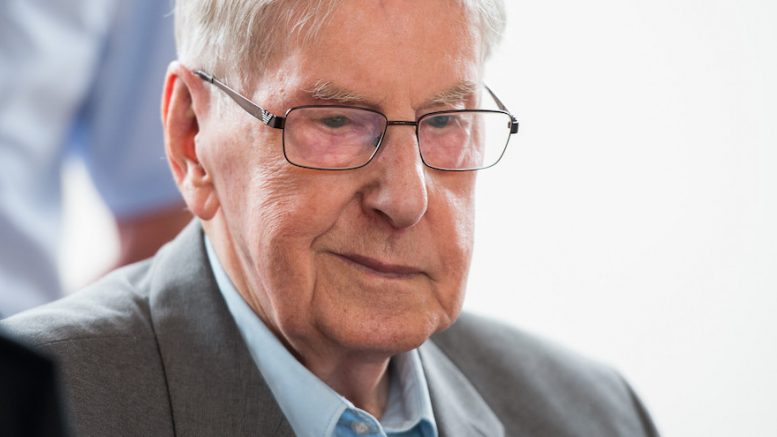 (JTA) — A former SS guard who is now 94 was sentenced to five years in prison by a German court for his role as an accessory in the murder of at least 170,000 people in the Auschwitz-Birkenau extermination camp in Poland.

The verdict and sentence of Reinhold Hanning were handed down on June 17,2016 from the district court in Detmold, in the state of North Rhine-Westphalia.

“You were in Auschwitz for almost 2 1/2 years and thus assisted in mass murder,” Judge Anke Grudda said in her address to the defendant in the courtroom.

The chief prosecutor had recommended six years in prison, and the defense wanted him released, claiming there was no proof that their client had committed individual acts of murder.

“He did not kill or beat anyone himself,” defense attorney Johannes Salmen said, according to the Bild newspaper.

The head of the Central Council of Jews in Germany, Josef Schuster, said that while the sentence in this case did not make up for decades of foot-dragging by German justice, it was welcome news “for victims and their families.”

“We owe a debt of thanks to the witnesses who spoke during the trial. It was not easy for them,” Schuster told reporters.

“No perpetrator should be able to say: ‘For me, it’s the past,'” he added. “The trial brings to the forefront, once again, what people are capable of doing to one another, and what incitement against minorities can lead to. So the trial made an important contribution to four dealing with German history.”

Hanning joined the Hitler Youth 1934 and the Waffen SS in 1942, the year he was posted to Auschwitz.

His is likely one of the last trials of Nazis in Germany. Clues leading to about 30 suspects in late 2013 came from the Central Office for the Investigation of National Socialist Crimes in Ludwigsburg, which made a major push to identify former death camp guards after the conviction of John Demjanjuk in 2011 for his role in the murders of nearly 30,000 Jews in the Sobibor death camp in Poland.

Investigations also were helped by tips from the public, after Efraim Zuroff of the Simon Wiesenthal Center’s Jerusalem office announced a reward for information leading to the conviction of Nazi war criminals in what the center called “Operation Last Chance.”

The Demjanjuk case set a precedent, in that being a guard at a death camp was sufficient to prove complicity in murder.

Be the first to comment on "Ex-Auschwitz guard, 94, sentenced to 5 years by German court"