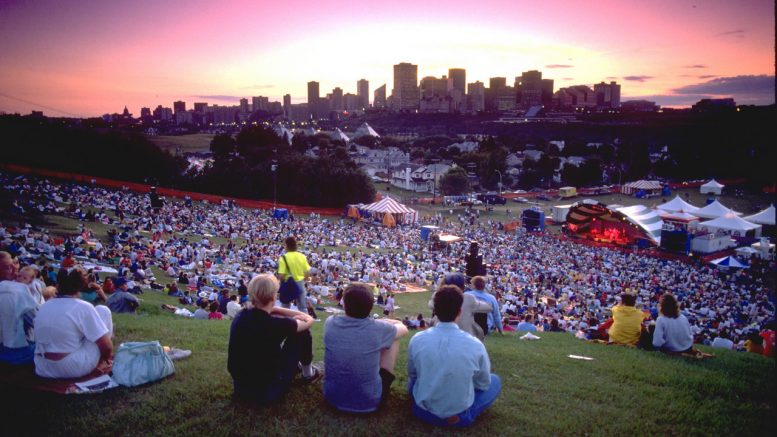 Edmonton Folk Fest takes place from August 8 - 11, 2019 at Edmonton's scenic Gallagher Park and the Fringe Festival is held in Old Strathcona from August 15 - 25.

(EJNews) – Summer in Edmonton means the return of festival season in Alberta’s Capital. Now that the fabulous Heritage Festival has come and gone, the season will be anchored by the always-fantastic Edmonton Folk Music Festival followed by the ever-popular Edmonton Fringe Festival.

If you’ve never been to Folk Fest, you should give it a try. And if you are a longtime fan who missed out on the ticket launch, don’t miss the opportunity now.

Each year the Festival comes to Edmonton and fills Gallagher Park with amazing music and a friendly easygoing atmosphere. It’s a great opportunity to take a break from everyday life for the weekend or just a day or night and sit back, relax and enjoy some great live music in a beautiful outdoor venue. There is always so much to do, and so much to see. With 69 artists playing this year, plus countless food vendors, art and craft displays and merchandise, and activities for kids and families, there truly is something for everyone.

The main stage is located at the bottom of the hill at Gallagher Park, creating natural stadium seating for all those in attendance, and featuring one of the most gorgeous views of Edmonton the city has to offer, and amazing sound quality.

In addition to the main stage, the festival has continuous music being played on 7 side stages throughout the day featuring several fan favorites including Ani DiFranco, The Brother Brothers, The Harpoonist and the Axe Murderer, Kenny Blue Boss Wayne and many more.

Right on the heels of Folk Fest, the 38th Annual Edmonton Fringe Festival will take place in the heart of Old Strathcona from August 15-25. Tickets go on sale August 7 at 12 noon.

Over 1600 artists will descend upon some of Edmonton’s established and makeshift venues to perform a wide range of alternative theatre ranging from hilarious to heart wrenching, improv to scripted and conventional to avant garde. The 10-day festival saturates the streets and theatres in Old Strathcona with a lively and festive atmosphere.

Several of the upcoming shows have Jewish connections, two in particular are: The Walk in the Snow – The true story of Lise Meitner by Jem Rolls and Ingenue: Deanna Durbin, Judy Garland and the Golden Age of Hollwood by Edmonton community member Melanie Gall.

The Walk in the Snow tells the overlooked story of Lise Meitner, a Jewish Austrian physicist who helped give the first theoretical explanation of the fission process. Her role in working with other prominent scientists was ignored at the time, while her mentors and collaborators were awarded the Nobel prize in chemistry in 1945.

Written and performed by Fringe veteran Jem Rolls in a breathless 60 minutes, The Walk in the Snow played to sold out audiences in London, Ottawa, Regina and Winnipeg this summer.

CBC gave it 5 out of 5 stars, writing that Jem Rolls “shines brightly, bringing us the tale of an important hidden figure in the history of physics.”

“Ever political, Rolls knows too much to let this story stay in the past. This is very much about today, redressing the forgotten contributions of women and reminding us how, in a flash, our times can change utterly.”

The Walk in the Snow is being performed at Walterdale Theatre beginning August 16.

Ingenue: Deanna Durbin, Judy Garland and the Golden Age of Hollwood is a wonderful musical show that tells the true tale of the lifelong friendship – and rivalry – of these two idols of Old Hollywood.

Each chapter of the story is paired with a song – many from the time period, but a few operatic pieces as well, which showcase Gall’s spectacular singing.

CBC called Melanie Gall an “unforgettable delight” and Apt613.ca said that “Ingenue is a charming, beautifully polished show. I highly recommend this play to everyone. Whether or not the historical aspect is of interest to you, Melanie Gall’s singing is a sublime experience that should not be missed.”

Visit fringetheatre.ca for a full schedule and to purchase tickets; tickets are also available at the Fringe box office.