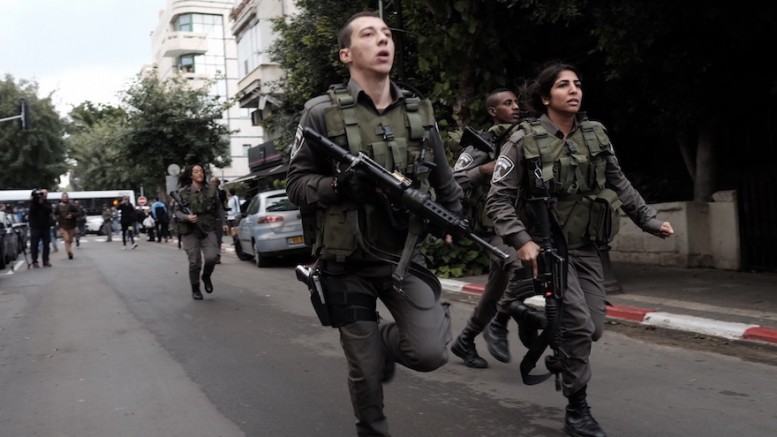 Israeli security forces search for the gunman who had shot Israeli civilians at a pub in central Tel Aviv, on Friday, January 1, 2016. Two people were killed in the shootings and several injured. Police suspect a terror attack. Photo by Tomer Neuberg/Flash90

(JTA) — The gunman who allegedly killed three Israelis last week in Tel Aviv was shot and killed by Israeli forces in northern Israel.

Nashat Melhem was shot dead Friday afternoon in a shootout with police near his home in the Umm al-Fahm area. An inaccurate initial report said that he had been shot in a mosque.

Channel 2 reported that he was tracked down to a building where his family had lived in the past.

Police said Melhem, 31, killed two young men when he shot up a bar in central Tel Aviv on Jan. 1 and then murdered a taxi driver who transported him from the scene of the crime.

Melhem had been the target of a massive manhunt in Tel Aviv, which then shifted to Israel’s north.

According to Channel 2, the breakthrough in the case came two days ago, when police found a personal item of Melhem’s near Umm al-Fahm, which helped narrow the search.

The Israeli forces, from an elite police unit, had sought to capture Milhem alive, but he had opened fire with the machine gun he used in the Tel Aviv attack, Channel 2 reported.

According to Channel 2, Israeli security officials believe Melhem had support from Islamic circles in the region.

In the Tel Aviv attack, Melhem killed Alon Bakal, the 26-year-old manager of the targeted Simta bar, and Shimon Ruimi, 30, police said. Six others were wounded.

The taxi driver whom Milhem is said to have killed was Amin Shaaban, a 42-year-old Israeli-Arab from Lod who had 11 children.

Mohammed Milhem, the father of the alleged shooter, identified his son as the shooter in the bar attack hours after it took place, based on security camera footage that was made public.

The attack was one of just a handful in Tel Aviv and its suburbs in recent months, which have largely been spared the explosion of terrorism centered in Jerusalem and the West Bank.

Be the first to comment on "Follow up: Alleged Tel Aviv gunman shot dead in northern Israel"