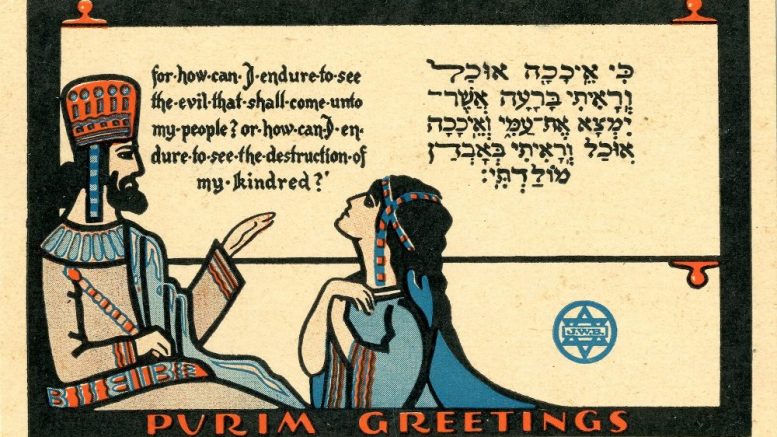 (AJNews) – In one of the Talmud’s more theologically troubling passages, an obscure sage named Rav Avdimi bar Ḥama expounded that when the Israelites stood “beneath the mountain” to receive the Torah, the Almighty was actually suspending Mount Sinai over their heads and making them an offer that they could not refuse: if you accept the Torah, fine; but if not, you will be buried on the spot!

Rabbi Aḥa bar Jacob objected that this scenario completely undermines the validity of Israel’s commitment to upholding the divine commandments, in that it amounts to a declaration that they only consented to it under coercion, rendering it legally null and void. To this Rava responded: nevertheless, they accepted the Torah again willingly in the days of Ahasuerus, as recorded in the book of Esther: “The Jews ordained, and took upon themselves.” Ostensibly this verbiage is redundant—why must it state both “ordained” and “took upon themselves”? Rava resolved this textual difficulty by reading the second verb as a pluperfect: in the days of Ahasuerus they ordained voluntarily that which they had previously taken upon themselves under duress at Sinai.

The implication is that until close to the end of the biblical era the Israelites were not bound by the commitment undertaken at Mount Sinai to observe G-d’s commandments, and that the real obligation did not take effect until the generation of Esther and Mordecai.

This explanation has the benefit of letting our biblical ancestors off the hook for their frequent violations of Torah laws, including their worship of the golden calf and other instances of idolatry. It does however create severe exegetical difficulties when we examine it in the broader context of the scriptural texts.

For example, even if we disregard the sources that emphasize the Israelites’ enthusiastic willingness to accept the Torah on trust, as implied in their words “we will do and [afterwards] we will hear,” the Bible records several other occasions when the people confirmed their allegiance to the Sinai covenant, such as upon their entry to the promised land under Joshua and on their return to Zion with Ezra.

Furthermore, the book of Esther seems quite explicit about what was being accepted then. The full verse reads “The Jews ordained, and took upon them… that they would keep these two days.” The passage is speaking very specifically about the adoption of the newly introduced festival of Purim, not about a general commitment to the Torah’s precepts.

In the face of all these difficulties, what did the talmudic rabbis have in mind when they placed the acceptance of Purim on the same level as the unique revelation at Sinai? For several Jewish religious thinkers this question inspired fundamental reflections about the nature of Torah and the roles of compulsion and free choice in the constitution of the Sinai covenant.

Rabbi Loew of Prague (the Maharal) linked these texts to a midrashic exposition of Ezekiel according to which a delegation approached the prophet announcing their wish to release themselves from the Sinai covenant and all its cumbersome restrictions. It was in reaction to that proposal that Ezekiel conveyed the Lord’s angry retort: “That which cometh into your mind shall not be at all, that ye say: We will be as the heathen… to serve wood and stone.”

The talmudic rabbis were making it clear that the acceptance of the Torah was never a matter of mere choice for the people of Israel, nor can it ever be. The Maharal’s interpretation is rooted in a fundamental theological premise that the Torah is not just a collection of laws and narratives—but is the metaphysical blueprint of the creation. Therefore, if the Torah were to become flawed or incomplete in any way, the universe could not continue to exist! The Torah predated the universe’s creation; therefore the divine reason for creating it would have been undermined if human beings, represented by the people of Israel, did not follow its laws and teachings. Viewed in this way, there was never any possibility of a world without Torah.

It was for this reason, says the Maharal, that G-d had to suspend the mountain over the Israelites’ heads and coerce them into accepting the Torah. Every component of creation makes its distinctive and irreplaceable contribution to the totality. Homo sapiens must do so by means of its unique gift of intelligence, and that in turn must be assisted by the divine guidance of the Torah. This task is too serious to entrust to human caprice.

And yet, as understood by Rabbi Loew, another essential part of the divine scheme is that humans should follow the law by their own free will. Our species is the transitional bridge between the upper realm of inexorable necessity and absolute truth, and the lower realm that is subject to diverse possibilities. This is what the Torah meant when it described humans as physical beings who – unique in the created realm – are imbued with a divine image which is actualized through our commitment to a divine law that sometimes transcends rational explanation.

This, wrote the Maharal, is precisely what happened with the institution of the first Purim. It was the only occasion in the Bible when the Jews accepted upon themselves of their own volition, without coercion or threat, the obligation to observe a commandment. As another talmudic statement expounded the verse: they “ordained” above what they “took upon them” below.

The talmudic sages had taught that the reading of the Megillah was hinted at in the Torah’s directive to remember the crime of the Amalekites, Haman’s ancestors. Therefore, the people’s readiness in the days of Esther and Mordecai to accept a precept that was suggested only indirectly can be regarded as a retroactive demonstration that they would have willingly accepted the commandments that were spoken explicitly at Sinai.

Indeed, the Torah does command us to “rejoice in your festival.” Purim seems like a fine time to start obeying that commandment.

‘From the Sources’ by Eliezer Segal is sponsored by the Zeisler Families of Edmonton, Calgary and New York City.

Be the first to comment on "From the Sources: Purim – Sequel to Sinai"