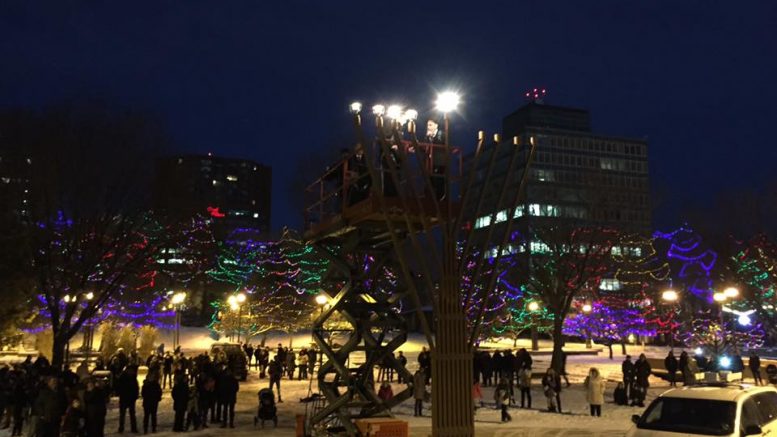 Join Chabad of Edmonton and the Edmonton Jewish Federation at the Giant Menorah Lighting on December 22, 2019 at 4:30 pm. Come celebrate Chanukah at the Alberta Legislature Rotunda.

(EJNews) – Chabad of Edmonton will once again, be hosting their 28th annual Candle Lighting Ceremony at the Alberta legislature on Sunday night December 22, 2019 at 4:30 pm.

December 22 is the first night of Chanukah, so in addition to the Shamash, one candle of the giant Menorah will be lit.

“Everyone is welcome to attend,” said Chabad Lubavich of Edmonton Rabbi Ari Drelich. “As in the past, we are looking forward to a large cross section of the community in attendance with representation from all 3 levels of government including Premier Jason Kenney (subject to verification).”

“This beautiful event is open to all and includes live music, holiday treats, entertainment for both young and old and of course the ceremonial lighting of Alberta’s largest Menorah standing at 21 feet and weighing 5000lbs.”

A free park and ride service will be provided with pickup at Beth Israel at 3:45 pm, pickup at Beth Shalom at 4 pm. The bus will depart the legislature following the program at 6:45 pm.

Chanukah, the festival of lights, celebrates the victory of the few against the many, the weak against the mighty and the righteous against the wicked.  The festival also commemorates the rededication of the Holy Temple in Jerusalem, during which only one day’s supply of oil for the Temple Menorah miraculously lasted eight full days.

Traditional foods of this holiday are potato pancakes called “Latkes,” they are served with applesauce or sour cream and “sufganiot” or jelly doughnuts.  Both of these delicacies will be served at the menorah lighting.

Chanukah is celebrated for eight consecutive nights with the lighting of a nine-candled menorah.  Eight of the candles are the same height; the ninth stands taller, and is called the “Shamash,” or the leader candle.  The Shamash is used to light the rest of the candles.  On the first night the Shamash lights one candle, on the second night two, etc. until all eight candles are lit on the last night of the holiday.

“The Menorah represents the light and strength that we need to overcome the challenges we encounter in our everyday lives. Every person is like a candle, we each have the ability to brighten the world.”

Be the first to comment on "Giant Menorah Lighting at the Alberta Legislature: December 22"