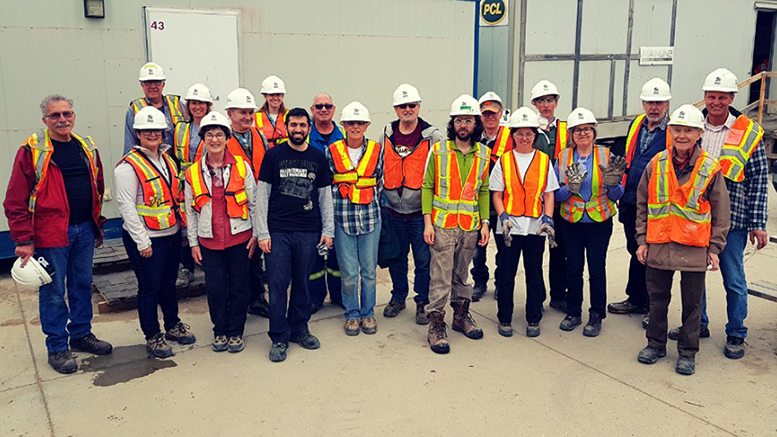 (Edmonton) – You get in the car and head over to 23rd Avenue, turn left and go east, hoping this road will lead directly to Carter Place, where the safety orientation starts promptly at 8:30 a.m.  And you go a long way before you get to 24th Street, into a part of the city that you have no awareness of until that day.

It was May 14, an average Tuesday in May with moderate weather, hovering clouds and a sprinkle of rain. As I drove past 50th Street thinking “when did this whole corner of Edmonton get unpacked?” I looked around in amazement at discovering more evidence of this city’s burgeoning growth.

The development, part of a very pleasant corner of south-east Edmonton, consists of 58 modern apartments and townhouses currently being completed as one of Habitat for Humanity’s largest projects ever. A number of the units, all designated for families who contribute many hundreds of hours of “sweat equity,” have already been occupied, as evidenced by the collection of tricycles and scattering of toys in some of the yards.

The Jewish Community, including Hillel, Jewish Federation, NCJWC, Na’amat, TBO, BI, BSS and TT, collaborated to plan and support the Build.  More than twenty volunteers from the Jewish Community worked that day, together with a number of volunteers from various community groups, under the supervision of experienced construction workers. It was especially heartening to see Rabbi Claman there as part of the group, along with many other familiar faces. BSS, TBO and BI sponsored a delicious lunch, catered by Bliss Baked Goods, for all participants and on-site staff. Altogether a very genial atmosphere.

The complex is almost complete. In fact, we were doing various finishing jobs in our assigned teams. Some helped to install cabinetry, some worked on insulation, some painted an array of moldings and casement trimmings, others were busy with cleanup. The hours went by very quickly, and at the end we really felt a sense of accomplishment, that we had contributed to providing modest but attractive housing to deserving families, mainly recent immigrants from around the world. Habitat for Humanity provides many such opportunities for meaningful volunteer work. I encourage everyone to participate at some point.