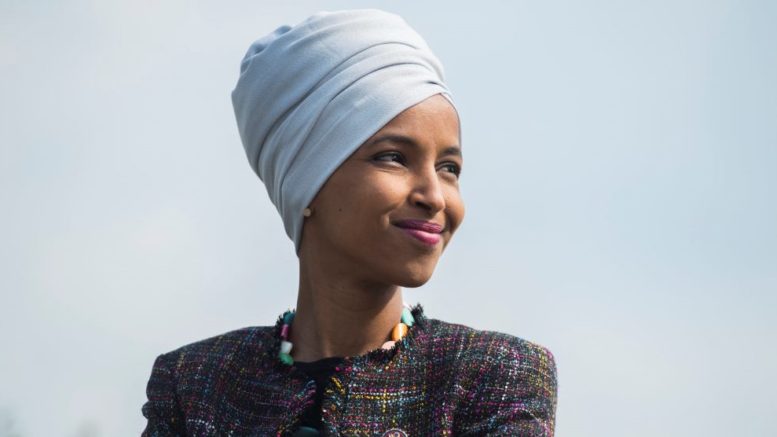 LOS ANGELES (JTA) — While spending Shabbat recently at a beachy resort in Southern California, I found myself toying with the idea of ditching my pricey wig — I wear it for modesty reasons as an Orthodox Jewish woman — for a headscarf in order to be more comfortable while roving the grounds.

As I wrapped a flowery cloth around my head and double-checked in the mirror to ensure my hair was hidden, it hit me that my shift was, in large part, due to Rep. Ilhan Omar.

Thanks to the Minnesota congresswoman’s controversial views and nonstop media coverage, her hijab has been showcased on the cover of every major newspaper, all over television, and in a thousand memes and social media posts. She was even able to help overturn a 181-year-old rule barring members of Congress from wearing head coverings on the House floor.

As much as I hate to admit it, her ascent to the halls of power has officially normalized head covering.

In the past, I wouldn’t have considered wearing a headscarf. Headscarves, at least the bland, blue, tie-in-the-back kind that I usually wear, have always struck me as being akin to shmattas (rags) — wear them at home and hide them when the company comes.  The few times I’ve donned one for a Trader Joe’s run left me feeling “shmatta-like,” a live caricature of a worn and worn-out religious woman, made complete by the baby I always seem to be toting.

The last time I went wigless in a professional setting was after a severe lice infestation. I was forced to double-bag my wigs in tightly knotted plastic for two weeks or risk the lice returning to traverse my head. At the time I was in graduate school and completing fieldwork at two public schools; I had never shown up to any professional assignment without a wig. Indeed, none of my classmates knew I even wore one until I gave a presentation on Orthodox Judaism in a diversity class.  (Even then, some didn’t get it. “You mean, you wear a wig all the time?” one classmate asked incredulously. “You’re wearing one now?”)

For those two weeks of wearing a headscarf, I found myself traipsing the halls with a big sheepish smile on my face, feeling like an out-of-place cultural weirdo. I considered buying an additional wig to wear, but I was too broke and busy from grad school to manage it.

So now, as the freshman lawmaker makes waves nearly daily with her latest views on Jews and the Jewish state, I find myself wondering: If she can wear a headscarf proudly in public, why can’t I?  Why am I so uncomfortable displaying my religiosity directly, preferring the ambiguity of a wig, long sleeves and a skirt?

I may not like or agree with Omar’s views, but if she can keep her cool with religious headgear in Congress, I should be able to do the same in front of a room of college students.

So if you see me wearing a headscarf at my next job interview, you’ll understand where my newfound backbone comes from.