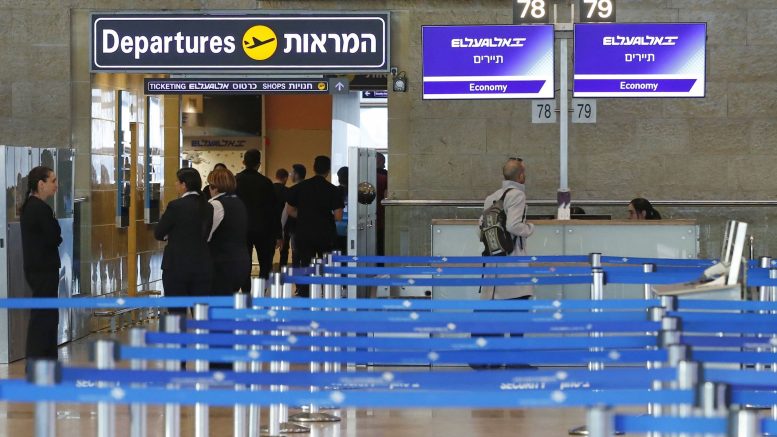 El Al Israel Airlines departure counter is pictured empty after it cancelled flights to Italy at Ben Gurion International Airport, near Tel Aviv, on February 27, 2020. - Israel has recorded three confirmed cases of the COVID-19 virus, including two from the Diamond Princess cruise ship and an Israeli who had been in northern Italy. (Photo by JACK GUEZ / AFP) (Photo by JACK GUEZ/AFP via Getty Images)

(JTA) — Israel will require all travelers from abroad to complete a 14-day quarantine, according to the latest regulation aimed at curbing the spread of the coronavirus in the country.

The decision, which Prime Minister Benjamin Netanyahu announced late Monday, capped days of open deliberations about how far Israel would to go to stop the disease’s spread.

The country had taken aggressive early action against the disease and last week began requiring quarantines for travelers from more than a dozen European countries. But it had not instituted the step for travelers coming from the United States, even as multiple outbreaks in New York, California, and Washington state signaled a growing presence of the coronavirus there.

Reports in Israeli media suggested that Netanyahu was reluctant to follow the recommendations of health officials because of the close ties and economic relationship between the United States and Israel.

“After a day of involved considerations, we have made a decision,” Netanyahu said in a video message. Anyone arriving to Israel from overseas will enter into quarantine for 14 days. This is a difficult decision, but critical to maintaining the health of the Israeli public. And the health of the public is above all. The decision will be in force for two weeks, and at the same time we are making decisions to preserve Israel’s economy.”

The new regulation will go into effect in 72 hours and will not apply retroactively, according to a Times of Israel report.

Be the first to comment on "In a dramatic step, Israel to require 14-day quarantine for all travelers from abroad"