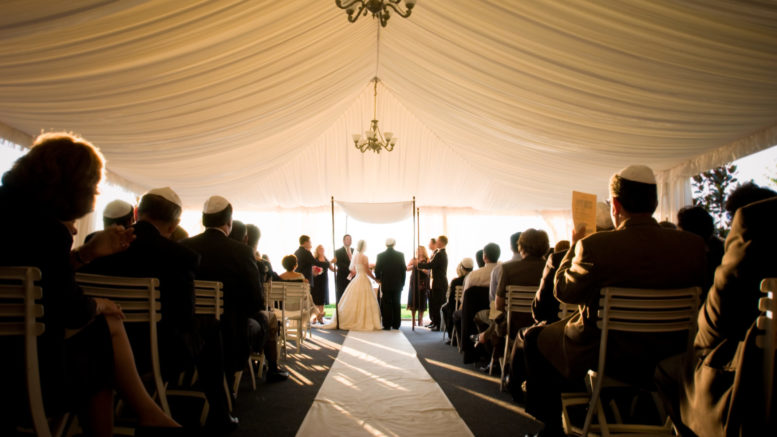 PHOENIX (JTA) – Israeli Education Minister Rafi Peretz’s recent tone-deaf declaration that intermarriage is akin to a “second Holocaust” was shocking and shameful, and desecrates the memories of those who perished in the Holocaust. While Peretz leads the Jewish Home party as well as the United Right coalition, and is known for a Kahanist ideology, we should not merely write off his comments as typical far-right ideology and be silently complicit.

Peretz’s horrible rhetoric is utterly distasteful to Jews who found love with a non-Jewish partner or who express their Judaism in ways that differ from Orthodoxy. Those Jews do not make their love commitments in an effort to hurt Judaism. It’s true that rising intermarriage has led to a significant loss of Jewish affiliation. However, to compare this to the murder of 6 million Jews is nothing short of outrageous.

This political demagoguery has a sinister aspect: It is an attempt to demonstrate that liberal Jews are to blame for assimilation and thus provide a justification for keeping Orthodox control over religious matters in Israel.

As a Modern Orthodox rabbi committed to halacha (Jewish law), I do not officiate at interfaith wedding ceremonies. I do, however, respect people’s choices, even when they differ from mine. I write this not only as someone who intentionally engages countless interfaith families in Jewish programming but as someone born and raised within an interfaith family.

Recently I stood at the Western Wall with a lovely family whom I’d gotten to know well. This family journeyed from the suburbs of America to celebrate their son’s bar mitzvah.

Jewish families the world over flock to Jerusalem for such celebrations. This family was an interfaith one, and the bar mitzvah’s father – a non-Jew – was so invested with the idea of Jewish continuity that he traveled halfway across the globe so his son could participate in a ritual that countless other Jews have celebrated through the millennia. I was moved to tears.

There are countless families in which one parent has not converted to Judaism but is still committed to raising a child in a loving Jewish home. More and more I see interfaith families who are passionate about finding a place in the broader Jewish community. Our communal markers of identity need not cast people into the simple binary of “Jew” or “non-Jew” when the reality is more of a spectrum.

Consider, for example, the kabbalistic notion of “zera Yisrael,” where one has a Jewish dimension to the soul even if the person is not deemed Jewish by halacha. Or consider the spiritual paradigm that a convert always had a Jewish soul within them yearning for its unique expression. Gentile family members who join their Jewish family in Jewish celebrations are not simply “non-Jews,” as if being a gentile is somehow inferior to being Jewish, but rather are part of the broader Jewish family.

These families must be embraced by our communities. Otherwise we will have disregarded our spiritual mandate from Sinai to bring love and tolerance to those who feel spiritually outcast and socially vulnerable in their quest to find God and community.

Still, too many of my Orthodox compatriots believe there is a “war” against intermarriage and that rejecting interfaith families from participation in Jewish life will deter further intermarriage. With deepest respect, I believe this strategy is misguided. Interfaith families are prevalent in American Jewish life and we would be neglecting a massive population seeking meaningful Jewish experiences.

Reform rabbis will perform interfaith weddings and strive to be fully inclusive to interfaith families. Traditional rabbis will have a different task of honoring the halacha they feel bound to while maximizing inclusion for individuals and families in every other possible way.

As clergy members, my colleagues and I should make conversion welcoming and accessible for the gentile partner should they choose this approach. At the same time, we have a responsibility to engage respectfully and meaningfully even if they do not convert. This includes welcoming them into our synagogues and learning spaces and at our Shabbat tables, protecting them from communal alienation and fervently supporting their navigation of their family journey on a pastoral level.

To be sure, I also am deeply concerned about Jewish assimilation and feel that the soul of American Jewry is at risk now: rampant materialism eclipsing spiritual values, nationalism prevailing over religion, tribalism over critical thinking, individualism over empathic community, virtual “I-it” relationships over “I-thou” relationships and an overemphasis on out-of-touch establishments over supporting new innovative approaches, to name just a few dangers.

For my parents, like so many Americans, their faith was only one factor involved in deciding whom to marry. I was all the richer for being exposed as a young child to different approaches until I deliberately solidified my Jewish identity as a young boy. Had it not been for Jewish leaders and communities who embraced me so warmly, I would not have cultivated such a passionate Jewish identity, nor would I have entered a lifelong commitment to Jewish communal service.

While our home is strictly observant and fervently Jewish, my children continue to be enriched through diverse exposure to my family’s quilt of different faiths. Rather than shun interfaith families, let’s celebrate the unique contributions they bring to Jewish life, lest we lose those parents or their children from the Jewish community. These holy souls are not only desired but needed for our community to flourish.

With all the tension that already exists between Israel and Jews in the Diaspora, Peretz’s reactionary statement of arrogance only stokes the fires of this precarious relationship. At the end of the day, we need to prioritize values Judaism over ethnic Judaism. Ethnic Judaism typically operates under a fear mentality of survival, whereas values Judaism prioritizes actualizing our moral mission trusting that surviving followings thrive. Those of us committed to halacha must not impose that upon others or use this holy instrument to shame.

Being as inclusive and welcoming as possible ensures that Jewish wisdom has its best chance of being a transformative moral and spiritual vehicle in a family’s life. If we can’t fully agree to religious inclusion than we must, at the very least, collectively affirm our ethical opposition to shaming and ostracizing.