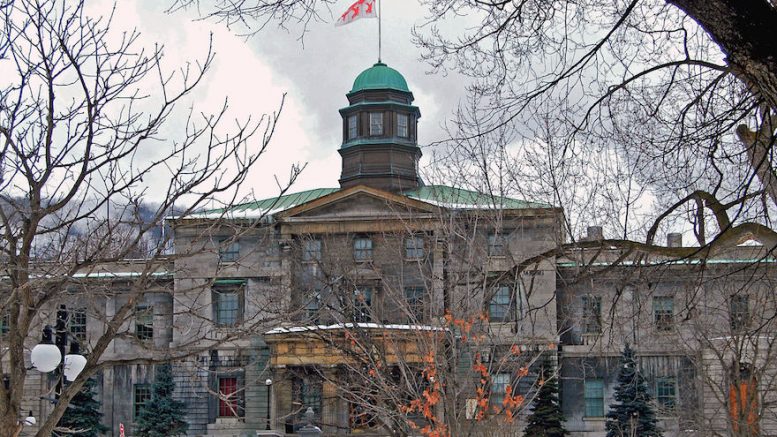 The student government at McGill University, seen here, is being accused of a "persistent abuse of power and displays of hostility toward Jewish and pro-Israel students." (Wikimedia Commons)

MONTREAL (JTA) — A Jewish student leader at McGill University in Montreal is fighting efforts to oust her from the student union for accepting a trip to Israel and the Palestinian Authority.

Edmontonian Jordyn Wright, a member of the Student Society of McGill University’s legislative council and board of directors, said she is “outraged and disgusted” by the student society’s call on November 28 for her to resign for agreeing to the trip sponsored by Hillel.

She is refusing to resign or quit the trip, despite the threat of impeachment upon return.

The trip, called Face to Face, leaves at the end of the month and includes visiting Palestinian areas of the West Bank.

“As a Jew, my connection to Israel is one core aspect of my identity, and I hoped that the trip would help me experience Israel through a new lens,” Wright explained in a post on Facebook.

She called the effort to have her resign “anti-Semitic.”

“The SSMU president singled me out and actively encouraged others to attack me,” she said in the post, adding that a non-Jewish councillor also planning to be on the trip has not received the same treatment.

A co-chair of the Centre for Israel and Jewish Affairs, Rabbi Reuben Poupko, said in a statement: “[W]e are once again witnessing misuse of the student government platform to exclude a Jewish student. The SSMU’s persistent abuse of power and displays of hostility toward Jewish and pro-Israel students are clearly not representative of McGill’s mainstream student population.

“We call on McGill students to reclaim the SSMU from the ideological fringes and rebuild an open, tolerant and inclusive campus
environment,” he said.

In 2017, the SSMU failed in an effort to impeach a Jewish councillor for being pro-Israel. The same year, an ex-SSMU member tweeted to “punch a Zionist.”

In a Facebook post, Jordyn wrote, “I am proud to be Jewish. Israel is the country with which I identify my heritage and culture, and I am lucky to call it a second home. My personal views do not preclude my sympathy for the continued suffering of the Palestinian people. I never hid my identity when I ran for my position. I am an open book, and Judaism is an integral part of who I am.”

“McGill’s student leaders consider themselves to be champions of equity, inclusivity, and diversity,” she continued. “I am appalled that McGill politics continues to exclude and discriminate against Jewish students.

“It is time to end this pattern of anti-Semitism deeply embedded in the SSMU that continually targets Jewish or Zionist students year after year. We must demand better of the people we elected to serve us.

“I am Jordyn Wright, and I will not resign.”