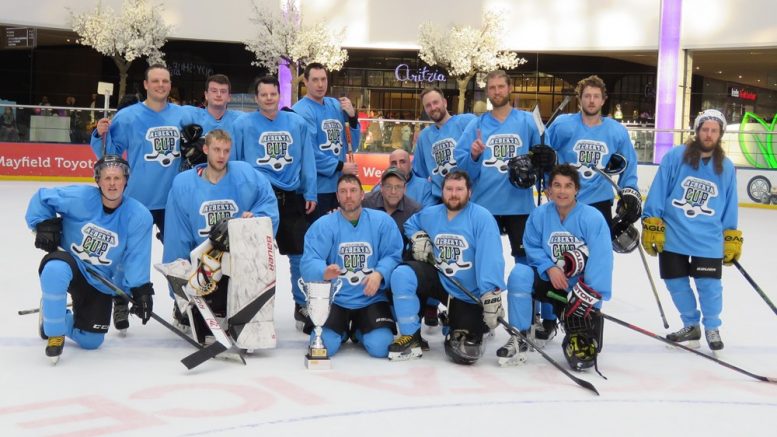 (EJNews) – The 2019 JNF Alberta Cup was held at the West Edmonton Mall Mayfield Toyota Ice Palace on February 23 (after Shabbos) and all day on the 24th. The event was a huge success.

“Not because an NHL scout identified one of our players as the next McGretzky,” explained JNF Edmonton Executive Director Jay Cairns, “but because we gathered as a community to participate in an event that contributes to health and wellness while promoting pride in identifying as Jews and supporting Israel through the Jewish National Fund.”

The tournament included one team from Calgary – the Girouxsalems – and three from Edmonton – the Fighting Yids, the Oyveylers and the winning team Chai Sticks.

As with all hockey tournaments, the teams played competitive hockey and there were some great plays demonstrated over the course of the two days – some precision passing, some tremendous saves and some bullet shots. However, as you can tell by the names of the teams, the tournament was filled with good natured camaraderie as well as a sense of humour. There was also an abundance of good sportsmanship that shone throughout all the games.

The tournament was well organized by Cairns; the variety and number of sponsors and contributors helped keep the costs down for the players, especially for those who came up from Calgary. The West Edmonton Mall proved once again to be an excellent venue for the event. Families and friends came out to cheer for their favorite teams and even patrons of the mall got into the spirit of the games, clapping and cheering for the great plays. 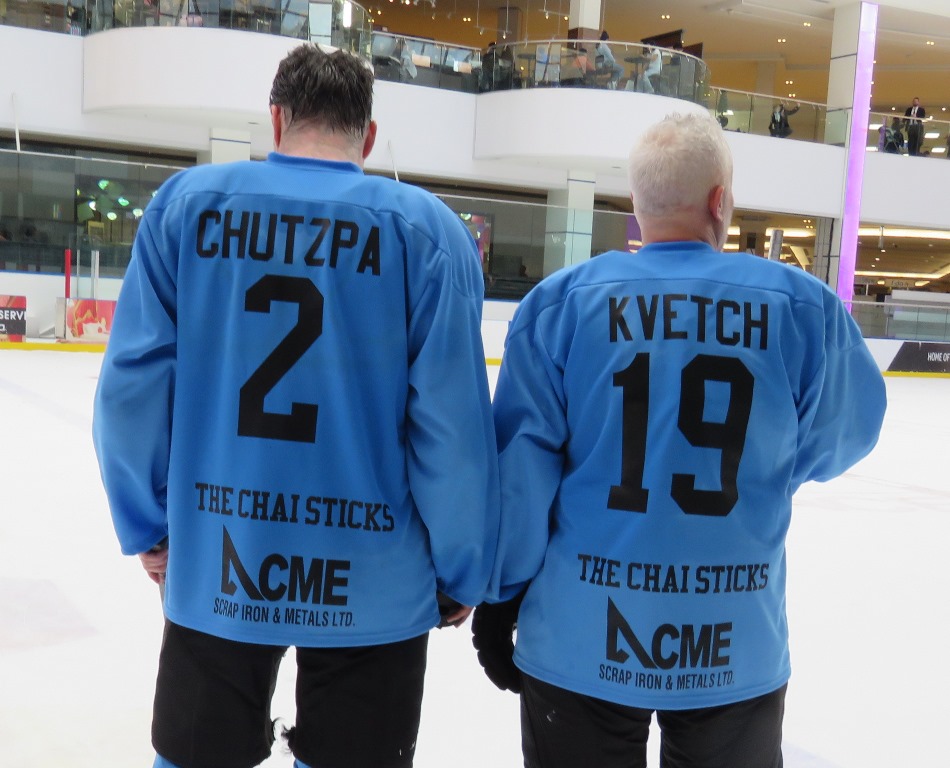 This year’s Negev Gala honouree, Lewis “Dovid Cherry” Wasel was a warm and welcoming JNF ambassador for the tournament – suit and all. Shane Asbell was enthusiastic as the sports commentator during the tournament. He brought a lot of ruach to the job and maintained a fast-paced description of goals scored and goals saved. Part of the fun was the care that the players took in choosing the names on the back of their jerseys. The name of the goalie for the Chai Sticks was Goornisht, the goalie for the Fighting Yids was Iron Dome. Other player’s names were Shlemiel, Chutzpah, Oy Gevalt and Kvetch.

Another highlight of the tournament was the singing of Hatikvah before the championship game. The free family skate was also a really well attended component of the event that allowed families to come together to enjoy the venue. 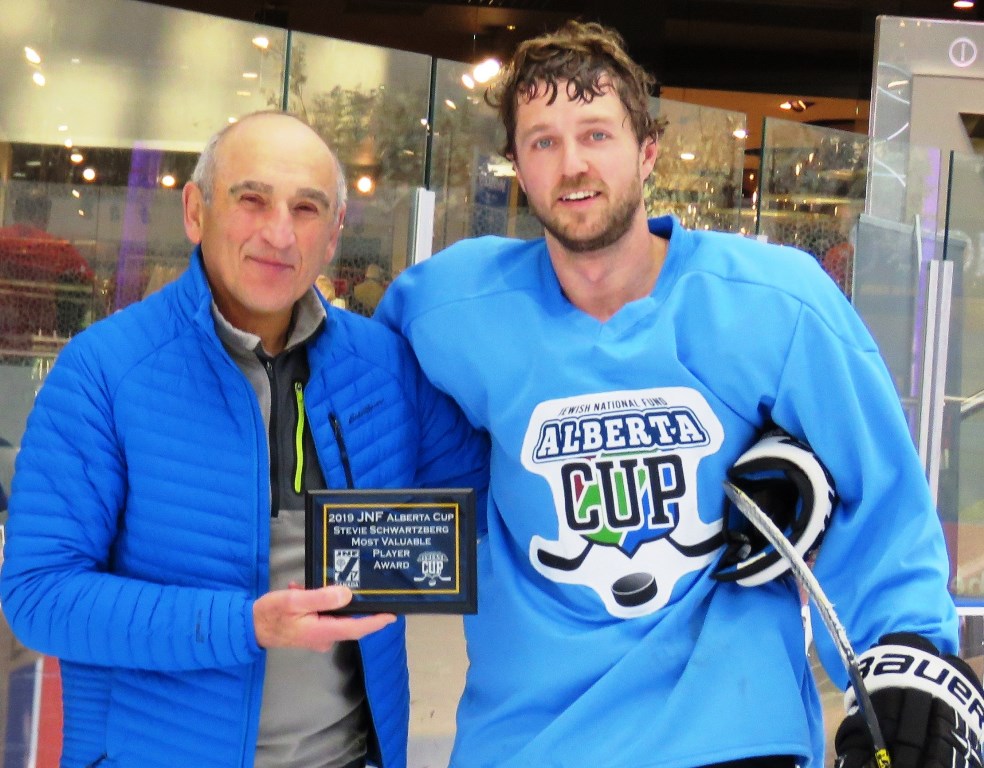 It was also very meaningful that Jack and Rowena Schwartzberg attended the tournament to present the MVP Trophy named in memory of their son Stevie Schwartzberg z”l who passed away in December 2017.  Adam Martinson from Chai Sticks was awarded the Stevie Schwarzberg MVP Award.

The tournament came to a close at around 5 pm with handshakes and cheers all around. The Edmonton players were thrilled that the Alberta Cup trophy was returning to Edmonton after spending the past year in Calgary.

Cairns was particularly appreciative of the event sponsors and contributors. The title sponsor was the Alvin and Mona Libin Foundation. The event sponsors were Barry and Cristine Slawsky and Barry had the pleasure of dropping the puck at the beginning of the championship game. 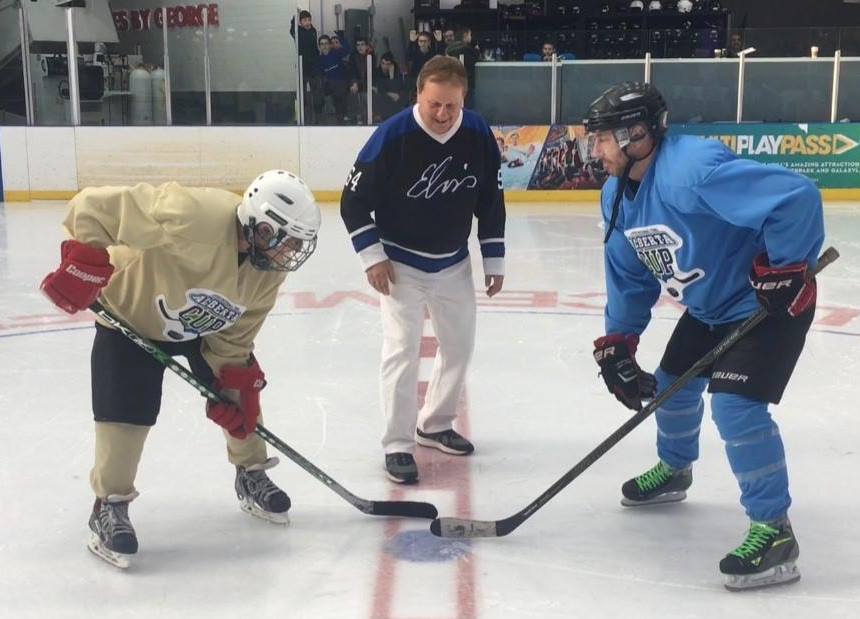 The host sponsor was West Edmonton Mall and the team sponsors were ACME Scrap Iron and Metals, General Recycling Industries, McLeod Law and West Edmonton Mall. The media sponsor was Edmonton Jewish News, the hospitality sponsor was David Cynamon and a special thanks goes to Old Dutch for providing promotional chips for everyone to enjoy. Sponsor for the MVP Award was TD Jasper Gates. Dan Moser and Top Shelf Analytics coordinated the referees and advised on hockey operational matters.  Cairns also singled out the valuable assistance he received from the Edmonton Jewish Hockey League.

“I’d like to extend a big thank you to all of our players, sponsors and contributors. Their help and positivity made it a memorable event!” remarked Cairns. “I look forward to seeing everyone again next year.”