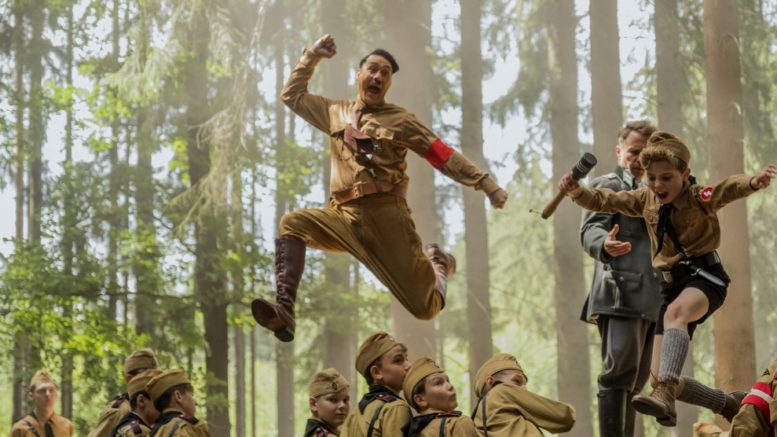 (JTA) — “Jojo Rabbit” sounds like a film that is difficult to pull off amid the state of rising anti-Semitism in 2019.

It’s a comedy set during the Holocaust about a 10-year-old German boy being brainwashed by Nazi ideology and his imaginary friend — a playful version of Hitler who likes to dance.

But before you get outraged or assume it downplays the horrors of the Holocaust, like multiple critics have argued already, take a deep breath: “Jojo Rabbit” is a very good movie with a meaningful message.

The film is written and directed by Taika Waititi — a Maori Jew most recognized for writing and directing the recent “Thor: Ragnarok” movie — who also stars as Hitler. His version of the Fuehrer is the imaginary projection of a boy named Jojo (Roman Griffin Davis) who is set on joining the Hitler Youth.

Jojo discovers early on that his mom (Scarlett Johansson) is hiding a Jewish girl in their attic. The two kids develop an unlikely friendship, and their relationship is at the heart of the film.

Though the movie is set during the twilight of Hitler’s reign in Germany, Jojo is still trained to hate, and the impact of the Nazi ideology on the young boy is clear. He believes ardently in the anti-Semitic conspiracy theories about Jews, and that only begins to change when he befriends Elsa (Thomasin McKenzie), the Jewish girl in the attic.

But Jojo is vulnerable at his core and just wants to be one of the cool kids. In World War II Germany, they happened to be the Nazis.

At one point, Elsa tells him, “You’re not a Nazi.” He responds, “I’m massively into swastikas.”

The premise of the film — a boy who believes in Nazi ideology begins to learn that Jews are human — and the fact that the viewer feels for this shamelessly Nazi boy feels absurd. Yet it’s absolutely necessary viewing. Not because we need to learn Jews are human, but because we must be reminded of how easy it is for children to be indoctrinated into hate.

“I experienced a certain level of prejudice growing up as a Maori Jew,” he writes in the film’s production notes. Making the film in 2019 “has been a reminder, especially now, that we need to educate our kids about tolerance and continue to remind ourselves that there’s no place in this world for hate. Children are not born with hate, they are trained to hate.”

Throughout it all, the viewer is never allowed to forget that Jojo is a 10-year-old. Near the end, Jojo’s friend Yorki (Archie Yates) is overwhelmed by all the fighting and tells Jojo, “I need a cuddle. Nothing makes sense anymore.”

These are kids, “Jojo Rabbit” is reminding us, thrust into a hateful world. They can still be taught the power of love and acceptance.

Waititi drew upon his own background to create the film. He grew up in the Raukokore region of New Zealand. His mom is Russian Jewish, and his dad is Te Whānau-ā-Apanui, a Maori tribe.

“Most of the prejudice I’ve experienced has been because of the color of my skin,” he explains. “Traditionally in New Zealand, there’s been prejudice against Maori people. I did experience that growing up, and I learned to kind of brush it off, which is not a great thing, but you do what you have to do.

“Still, I think I wound up subverting a lot of these feelings into comedy. That’s why I feel very comfortable poking fun at the people who think it’s clever to hate someone for who they are.”

In that sense, he is following in the footsteps of Mel Brooks.

“If you can reduce Hitler to something laughable, you win,” the famed Jewish comedian once said.

And Waititi’s Hitler is funny. He is sassy. He is ridiculous. His arms flop all over the place when he runs. I laughed out loud at many of his lines. Hitler is played for laughs, even as the audience is mindful this is Hitler.

Why is it funny? Well, because Waititi’s Hitler is not really Hitler. Not the historical version of Hitler.

“He’s a 10 year-old kid’s version of Hitler. So he doesn’t have to share anything with actual Hitler because 10 year-olds never meet Hitler. He’s basically a 10 year-old who happens to have a tiny little mustache,” Waititi told Deadline. “I didn’t have to do any research, and I didn’t do any research. I didn’t base him on anything I’d seen about Hitler before. I just made him a version of myself that happened to have a bad haircut and a shitty little mustache. And a mediocre German accent.”

Waititi cast himself as Hitler after a frustrating search. When he started filming, he wrote on Twitter, “What better way to insult Hitler than having him portrayed by a Polynesian Jew?”

As I watched, I kept going back to that quote in my head. What would make Hitler angrier than to be portrayed by a Jewish person of color? (To be fair, our mere existence as Jewish people would probably be enough to inspire anger in a long-dead Hitler.)

Some have argued that despite its good intentions, the film does not handle the subject matter sensitively enough — just as Roberto Benigni’s 1997 Oscar-winning film “Life is Beautiful” was critiqued for producing comedy in a World War II setting.

Keith Uhlich wrote in IndieWire that the movie contains too many anti-Semitic stereotypes that are “consistently utilized for easy guffaws” instead of teaching moments. Hannah Woodhead wrote in Little White Lies that the film feels too eager to point out “that there were good Nazis, too.”

There’s a running gag in the film that involves characters saying “Heil Hitler” back and forth to each other. A new character who walks into the room greets each person with a “Heil Hitler,” and they reply in turn. The scenes full of “Heils” stretch slightly too long — but that is exactly the point. The ominous phrase has been rid of its terror and turned into an awkward joke.

“Jojo Rabbit” isn’t trying to be a typical Holocaust film. It’s about understanding what makes people hate — how they are taught so early to hate — and truly laughing at them.