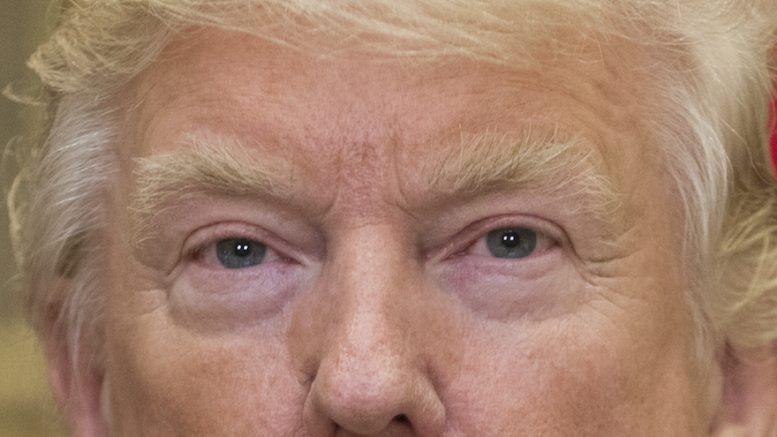 President Donald Trump listening to remarks from President of Turkey Recep Tayyip Erdogan during a joint statement in the Roosevelt Room of the White House in Washington, D.C., May 16, 2017. (Michael Reynolds/Pool/Getty Images)

NEW YORK (JTA) — No one who has lived in Israel or even visited for an extended time can forget the top-of-the-hour news broadcasts on Kol Yisrael, or Israel Radio.

Before its shutdown this week as part of a byzantine reform of public broadcasting, the government-run station preceded its brief updates with a series of short beeps and one long one marking the hour. On public buses, the driver would turn up the sound and the passengers would go quiet as a voice-of-doom announcer would intone, “Kol Yisrael m’yirusalayim, shalom … Hinei hachadashot …” — “The Voice of Israel from Jerusalem, shalom. Here’s the news …”

Even in periods of relative calm, you could sense people holding their breaths until the news turned out to be something benign or unsensational. My Hebrew was never great, but even I remember feeling relieved when the first thing the announcer said was “Rosh hamemshala,” or “prime minister.” My thinking was, nothing dire could be happening if they’re talking about the government.

The standard explanation for all this solemnity was that Israel was a country perpetually on the edge, and every newscast could bring notice of a new threat or sudden disaster. On visits to Israel over the decades, I learned to appreciate living in a country of relative stability and calm, where threats were usually distant and few issues were existential.

Whatever else you can say about the past four months, the Trump administration has robbed us of that luxury.

Blame Trump or a hysterical media, but the whole notion of stability and calm seems so … 2016. Honestly, I’ve been wracking my brains trying to remember a key moment from either of Barack Obama’s two terms. Yes, there was the overall sense of a personally popular and politically divisive president wrestling with the opposition in the House and Senate. There were popular decisions and unpopular decisions. But the alarming and, as they say in the news business, “holy s**t” moments were few and far between. His first inauguration was inspiring. The announcement of the killing of Osama bin Laden was way cool. I remember tearing up when he sang “Amazing Grace” at the funeral for a victim of the Charleston church shooting. And chuckling when he played along with Zach Galifianakis on “Between Two Ferns.”

And that’s about it for “No Drama Obama.” Trump, by contrast, provides as much drama in a week as Obama would in a year or two. Do you remember the Comey firing? How about the evolving series of explanations offered by his aides? Or Trump’s interview with Lester Holt, in which he said he had already decided to fire the FBI director before the Department of Justice could provide a, well, justification.

You’re forgiven if you thought, in the wake of Monday night’s bombshell about Trump sharing highly classified information with the Russians — the Russians! — that the Comey thing took place a few months ago rather than last Tuesday. I was about to sink into a stupor on the bus ride home Monday when my wife messaged me, “Did you see the Washington Post story?” Nap averted! That meant an evening of surfing the cable news networks and thumbing through Twitter. After a night of restless dreams — in one I was forced to spill my deepest, darkest secrets to a beast with the face of Sergey Kislyak and the body of Sergey Kislyak  — I woke up to Trump essentially confirming the account his top aides had denied the night before. Five minutes ago came word that Israel was — no surprise here — the source of the intelligence Trump disclosed to the Russians (the Russians!).

The nature of this presidency is that the unusual and unprecedented quickly supplants the abnormal and the unheard of, cycle after cycle. The left cries emergency. The right celebrates the disruption. And most of us switch on our televisions the way we do a broken barbecue grill, bracing for the explosion and singed eyebrows.

There is an upside, I suppose, to all this craziness. You can’t say people aren’t paying attention. Last year, according to Nielsen, cable news viewership almost doubled, with adults watching over 27 billion minutes per week. (That’s cumulative, by the way. I first read that as saying individual adults watched 27 billion minutes of cable news each week and figured, sounds about right.) The failing New York Times added 308,000 new digital subscriptions in the first quarter of this year. JTA posted record numbers of online readers during the election campaign and it has continued into the Trump presidency.

Friends regularly tell me they and their children are more engaged in public affairs than they were before the election campaign. More quietly, Trump foes admit that they don’t remember the news ever being this interesting, or entertaining, outside the occasional crisis — although they will quickly say it is entertainment they can do without.

Israelis like to claim that the high stakes of living in a stressed-out country actually make life seem more precious. According to the U.N.’s recent World Happiness Report, Israel is the 11th-happiest country in the world, three places ahead of the United States. When the Christian Broadcasting Network asked a young Israeli named “Sam” why that would be, he replied, “I think that the things that are really important to people here in Israel, they’re not sort of superficial things.”

But all this paying attention comes with a price. An American Psychological Association survey in February found that 57 percent of Americans say the current political climate is a “very” or “somewhat” significant source of their stress. (Unsurprisingly, Democrats were about three times as stressed as Republicans.) An APA official suggested people limit the amount of time spent consuming the news and social media.

The biggest price may come in the loss of a basic sense of freedom. If any institution is running well, its activities are mostly invisible or unremarkable to the people using them. (No one tweets, “The A Train was on time, uncrowded and delightfully clean!,” and not just because it never is.) A citizen should be able to turn off the media for a while without feeling that she will be missing something significant to her well-being or survival.

“One of the great achievements of free society in a stable democracy is that many people, for much of the time, need not think about politics at all,” Andrew Sullivan wrote recently. “The president of a free country may dominate the news cycle many days — but he is not omnipresent — and because we live under the rule of law, we can afford to turn the news off at times. A free society means being free of those who rule over you — to do the things you care about, your passions, your pastimes, your loves — to exult in that blessed space where politics doesn’t intervene.”

The ominous message of George Orwell’s “1984” is that “Big Brother is Watching You.” Maybe just as ominous is the idea that we can’t stop watching Big Brother.

Be the first to comment on "JTA ANALYSIS: When a government won’t let you look away"