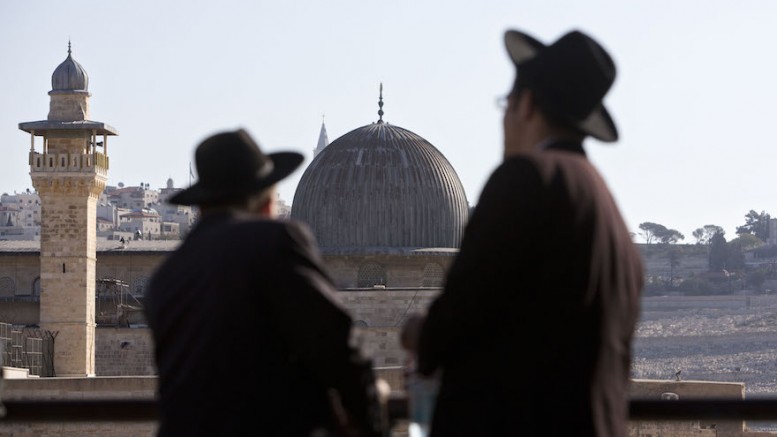 (JTA) — It could have been a fraught coincidence, especially on a 90-degree day with conflict still simmering in Jerusalem over access to the Temple Mount.

Israel’s 6 million Jews observed Yom Kippur on Sept. 23 by praying, fasting — or using the daylong ban on cars to bike the expressway. At the very same time, the country’s 1.4 million Muslims celebrated Eid al-Adha, a day of familial feasting and celebration.

Despite a heavy police presence in Jerusalem, there were a handful of stone-throwing incidents over the dual holiday. But elsewhere, Israeli Jews and Arabs opted for unity over unrest — with some leadership from the government and peace organizations.

Weeks ago, the Abraham Fund Initiatives, a Jewish-Arab coexistence group, put out an ad, aired on Israeli TV, educating each side about the other’s holiday in hope of heading off conflict.

Israel’s Welfare Ministry posted a video on Sept. 22 of Jews and Muslims describing their respective holidays in one word. The video ends with each participant expressing his or her wishes for both holidays. One Jewish woman hopes that “something in everyone’s big heart will open,” while a Muslim woman wishes “that Jews and Arabs would pass this holiday in peace.”

And on the night before the holiday, an Israeli-Palestinian dialogue group called Kids Creating Peace held an event in Jerusalem that drew 100 teenagers, from both sides, ages 14 to 18, who take part in regular discussions. The event marked the launch of a social media campaign in which the teens took selfies of their eyes, with the hashtag #IAmHumanity, to show what they share as people.

The event also featured a video address by Palestinian Authority President Mahmoud Abbas. Israeli President Reuven Rivlin, who has championed tolerance since taking office this summer, sent a letter to the group urging all Jews and Arabs to take responsibility for their shared life.

Be the first to comment on "JTA blog: On hot Yom Kippur, Israel’s Jews and Arabs kept their cool"