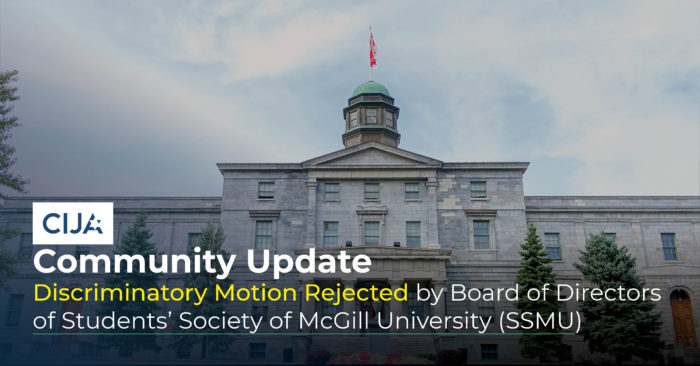 Montreal, QC— On December 4, the Student’s Society of McGill University’s (SSMU) Board of Directors rejected a discriminatory motion by the SSMU’s Legislative Council that called for the resignation of Jordyn Wright, a Jewish student and SSMU councillor. The motion called for Ms. Wright’s resignation because she agreed to participate in a trip to Israel.

The SSMU Board of Directors’ decision came after widespread condemnation of the motion. Perhaps the most damning statement came from the McGill administration. In a formal statement, Deputy Provost for Student Life and Learning, Mr. Fabrice Labeau, expressed the university administration’s serious concerns and warned that the university would not tolerate “a culture of ostracization.”  In his statement, Mr. Fabrice Labeau, Deputy Provost for Student Life and Learning, expressed the university administration’s serious concerns about the motion and urged SSMU’s Board of Directors not to ratify it. He also added that students should never be targeted for their identity or political and religious beliefs. Mr. Labeau’s full statement is available here.

The administration joined a chorus of voices that included hundreds of SSMU councillors and constituents who published an open letter yesterday sharply criticizing the motion.

In response to these developments, Rabbi Reuben Poupko, Co-Chair of the Centre for Israel and Jewish Affairs-Québec (CIJA-Québec) issued the following:

“CIJA applauds the SSMU Board of Directors for unequivocally rejecting the Legislative Council’s discriminatory motion targeting a Jewish student leader. Since last November 28, hundreds of students have denounced the motion, while McGill University’s Deputy Provost for Student Life and Learning, Fabrice Labeau, took an exemplary stand in a message to the McGill community by stating that the motion was “contrary to the University’s values of inclusion, diversity and respect” and that it “represents a very serious breach of trust.” He called on the student government to “take proper action.”

“CIJA commends the McGill administration for clearly articulating its opposition to attempts to ostracize a Jewish student on the basis of her identity.”

CIJA is pleased that the Deputy Provost’s statement  had its intended effect and that the student body firmly rejected the harassment, intimidation, and exclusion of its members and will henceforth refrain from raising obstacles to students’ freedom to pursue new and formative experiences.

“The unjust treatment experienced by Ms. Wright is clearly not a reflection of the broader McGill community, as evidenced by an open letter published by multiple SSMU councillors and constituents.

“Discrimination, racism, and any attempt to ostracize students based on their identity have no place on campus, or anywhere else for that matter. CIJA will proudly continue to provide support to our partners at Hillel and the courageous students who are addressing these instances of discrimination from the front line.”

The Centre for Israel and Jewish Affairs (CIJA) is the advocacy agent of the Jewish Federations of Canada-UIA including Federation CJA.