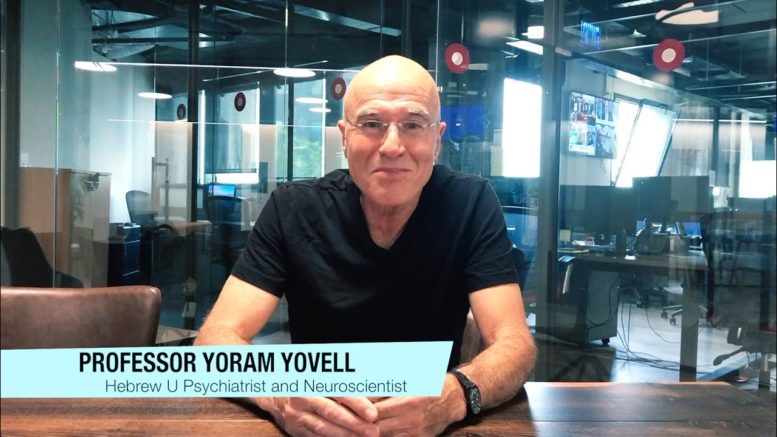 Israel's Guru of Happiness Dr. Yoram Yovell is on a 3 city tour of Canada sponsored by the Canadian Friends of Hebrew University. He'll be in Edmonton on July 23.

(Edmonton) – We all want to be happy – but being happy is rarely what we tend to think it is.

Canadian Friends of Hebrew University, with support from University of Alberta, is proud to announce a unique and very special lecture “The Science of Happiness” with Dr. Yoram Yovell, at the Edmonton Clinic Health Academy at U of A at 7 pm.

What is the difference between happiness and pleasure? Is happiness an experience or an action? Will love or having children make us happy? and how is happiness encoded in the brain?

In this lecture, Prof. Yovell will discuss the best current scientific insights on the path to happiness including the research of the working women in Texas, with the surprising result of what really makes women happy.

He will give us updated tools to help us achieve happiness, explain if happiness is encoding in our genes and if there is a way to change it.

With all the challenges that Israelis and their country face, studies and public opinion surveys indicate that Israelis are among the happiest people in the world. Why?

Answering the question – what makes people happy? – is the life’s work of Hebrew University Professor Yoram Yovell. A mega-star in the “science of happiness,” Yovell is a psychiatrist, brain researcher and psychoanalyst with a PhD in neurobiology and several bestselling books to his credit. He is also a familiar face on Israeli television. He will be doing a Western Canadian tour in 2019, hosted by Canadian Friends of the Hebrew University.

On a societal level, Yovell says, the countries that rank highest on the United Nations’ happiness scale are the Scandinavian countries, Switzerland, the Netherlands, Canada, New Zealand, Australia, then Israel. What these places all have in common – and what Yovell identifies as prerequisites to national happiness – is a Developed World economy with social stability, fundamental freedoms, basic infrastructure like clean water, and a good social welfare and health system.

These intangible values can even trump economic well-being. Once basic economic needs are met, additional average incomes do not impact much on happiness, he adds.

“For example, Israel is higher up [on the happiness scale] than countries where the mean average national income is higher, like Germany, like France, like England, like the United States. All these places have higher incomes than Israel, but their happiness scores are lower,” says Yovell. “It has to do with the extraordinary social cohesiveness here. Even though Israeli society is more fragmented than it used to be, it’s still a very, very cohesive society and there’s a sense of mutual responsibility.”

While Israeli Arabs report being less happy than Jewish Israelis, they are happier than their Arab cousins in neighbouring states.

“That has to do with the fact that Israel is a democracy, that it has freedom of speech, that there’s a judiciary system that works, that you can still get a fair trial,” he says. “If they come to the hospital, they know that they would get equal care, and the care is good.”

Measuring happiness at the macro – national – level is easier than predicting whether an individual will be happy in their life, adds Yovell, whose work has centred on this core concern. While being part of a socially cohesive community and having a sense of purpose plays into individual happiness, Yovell and PhD student Michal Horesh are now applying Yovell’s research to the flip side of happiness – unhappiness at its worst, which leads to suicidality.

“There is a lot of effort being put into an attempt to predict suicide and we’re not terribly good at it, unfortunately,” says Yovell. “What we did learn is that what pushes most suicide victims over the edge is unbearable mental suffering. In that sense, most people who kill themselves do so not because they don’t want to live anymore, but rather because they can’t stand to suffer anymore.”

A pivotal discovery in recent decades is that the neurobiology of mental pain and physical pain partially overlap within the brain circuits that mediate the experience of pain. Knowing this, Yovell’s research has indicated that treating mental pain similarly to physical pain might reduce suffering enough to alleviate the immediate danger of suicide.

Treatment of depression can include psychotherapy, medications or a variety of responses. But these take time. The urgency of alleviating the immediate danger of suicide is what Horesh’s research will address.

For more information about the Science of Happiness please join Dr. Yovell on July 23 at the University of Alberta, Edmonton Clinic Health Academy located at 11405 – 87 Avenue, Lecture Theatre 2-490.  Admission is free but registration is required. RSVP to edmonton@cfhu.org or call 780-444-0809. A dessert reception will be held following the lecture.

This program is co-sponsored with the University of Alberta and made possible by the Dr. Robert Rogow and Dr. Sally Rogow Memorial Endowment Fund.