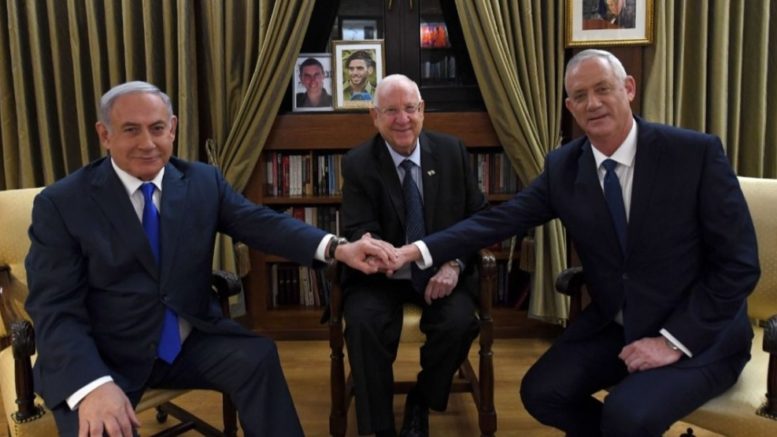 The heads, respectively, of the Likud and Blue and White parties announced the negotiations late on Monday September 23, following a two-hour meeting at the Jerusalem residence of President Reuven Rivlin. They spent an hour each with Rivlin and alone.

Netanyahu and Gantz, the top two vote-getters in the national election Tuesday, said in a statement released after the meeting that the leaders of their negotiating teams would meet the following day. The statement also said that Rivlin had invited the party chiefs for a follow-up meeting on Wednesday.

Monday’s meeting came after Rivlin concluded talks with representatives of all the parties that will be represented in the new Knesset. The talks concluded with 55 seats going to Likud and 54 to Blue and White. A minimum of 61 seats in the 120-seat Knesset, or parliament, is needed to form a coalition government.

Avigdor Liberman’s Yisrael Beiteinu party, which won eight seats in the election, did not recommend either Netanyahu or Gantz, instead calling for a unity government. Balad, among the four Joint List of Arab parties, also refused to recommend Gantz, giving him only 10 of the Joint List’s 13 seats.

Gantz and Liberman also met on Monday. Afterward, Liberman said in a statement that the parties have realized that a unity government is the only solution and that the “only argument right now revolves around the question who should serve as prime minister first and who second. I hope that President Rivlin succeeds in bridging between sides and a decision will be made on the matter.”

Prior to meeting with Netanyahu and Gantz, Rivlin said in a statement: “The entire country is looking at us with deep concern that we will go to elections for a third time. A stable government cannot be formed without the two big parties and this, I believe, is the will of the people.”

Netanyahu was unable to form a government coalition following a vote in April.