A new six-week course from the Rohr Jewish Learning Institute starts on May 15. The topic is "Survival of a Nation: Exploring Israel through the lens of the Six-Day War."

Beginning Monday, May 15, at 7:30 pm, Rabbi Mendy Blachman of the Edmonton JLI (Jewish Leaning Institute) will offer a fascinating new six-session course from the Rohr Jewish Learning Institute (JLI) called Survival of a Nation: Exploring Israel through the Lens of the Six-Day War.

Commemorating 50 years since the Six-Day War, the course invites participants to experience a captivating account of what was at the time considered by many to be the most improbable and astonishing victory in all of military history. 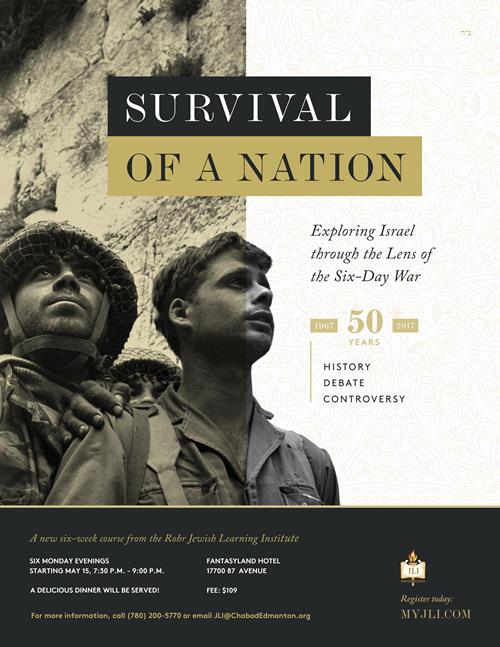 If Judaism is a religion of ideas, why do Jews care so much about land? Why does Israel perpetually raise the ire of the entire world? And what are the ethics of preemptive strikes and collateral damage? The course also inquires how Israel might protect itself against an enemy that uses human shields, and explores Jewish positions about Israel’s moral obligation concerning territories captured in the Six-Day War.

“In Survival of a Nation modern history meets contemporary controversy,” explained Rabbi Zalman Abraham of JLI’s Brooklyn headquarters, “The thrilling historic narrative raises questions about morality and the prospect of peace in the Middle East that began — or were highlighted – during the Six-Day war and remain unresolved.”

Like all JLI programs, this course is designed to appeal to people at all levels of knowledge, including those without any prior experience or background in Jewish learning. All JLI courses are open to the public, and attendees need not be affiliated with a particular synagogue, temple, or other house of worship.

Interested students may call (780) 200-5770 or visit www.ChabadEdmonton.org for registration and for other course-related information.

JLI courses are presented and sponsored in Edmonton by Chabad of Edmonton.

Be the first to comment on "New Edmonton JLI course focuses on the impact of the Six-Day War on Israel: Starts May 15"