"Old Stock: A Refugee Love Story" is the dark but humorous folk tale of Romanian Jewish refugees coming to Canada in 1908. Their love story is woven together with a high energy concert - on the Citadel Theatre in Edmonton from May 9 - 13.

(EDMONTON) Old Stock: A Refugee Love Story is a humorously dark folktale woven together with a high-energy concert. This music-theatre hybrid starring genre-bending sensation Ben Caplan is inspired by the true stories of two Jewish Romanian refugees coming to Canada in 1908. Playwright Hannah Moscovitch wrote the piece about her great-grandparents’ journey to Canada, resulting in both a tale about refugees and a love story. It’s about how to love after being broken by the horrors of war. It’s about refugees who get out before it’s too late, and those who get out after it’s too late.

2b theatre company, in co-production with the National Arts Centre, workshopped Old Stock at the Citadel Theatre in November 2016. The show had its local premiere in Halifax at The Waiting Room in May 2017; its national premiere in Ottawa at the Canada Scene Festival, presented at the National Arts Centre, in July 2017; and its international premiere in Edinburgh at Canada Hub @ King’s Hall in Association with Summerhall, Edinburgh Fringe in August 2017. It received the Scotsman Fringe First Award, as well as the Herald Angel Award. Recently, Old Stock had an Off-Broadway run in New York, where the New York Times declared it a critic’s pick. The show was also recently nominated for six Drama Desk awards, including Outstanding Music and Outstanding Book of a Musical.

Caplan, who co-created the production with Moscovitch and director Christian Barry, also stars as The Wanderer. A musician and poet, Caplan has released two albums and has followers around the world. The show’s musicians double as the cast, with Chris Weatherstone as Chaim (woodwinds) and Mary Fay Coady as Chaya (violin), in addition to Graham Scott on keyboard and accordion, and Jamie Kronick on drums. 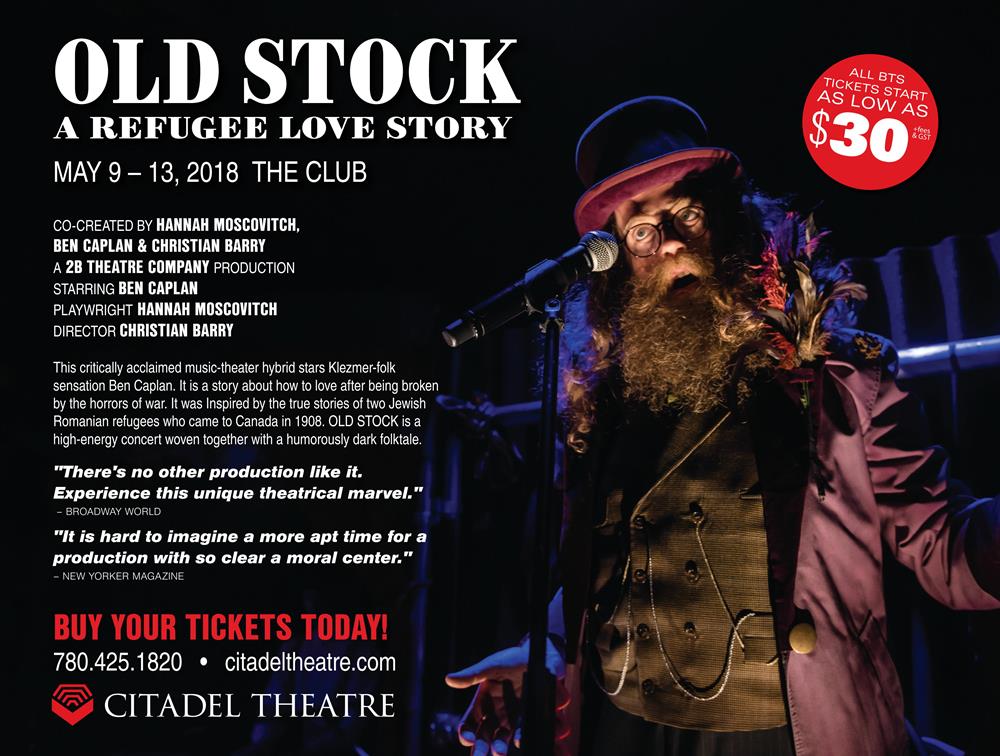 Old Stock: A Refugee Love Story runs May 9 to 13, 2018 in The Club at the Citadel Theatre. Tickets start at $30 plus fees and GST. For more information or to purchase tickets, call the Box Office at 780.425.1820 or visit www.citadeltheatre.com.

2b theatre company is celebrated at home in Halifax and across Canada as a driving artistic voice that creates vital theatre for the world stage. They have presented their work to over 50,000 audience members across five continents, 11 countries, and 50 cities, from Halifax to Hanover, Edmonton to Edinburgh, and Toronto to Tasmania. They have won awards and accolades the world over.

Be the first to comment on "“Old Stock” a Romanian Jewish refugee love story is coming to the Citadel Theatre: May 9 – 13"