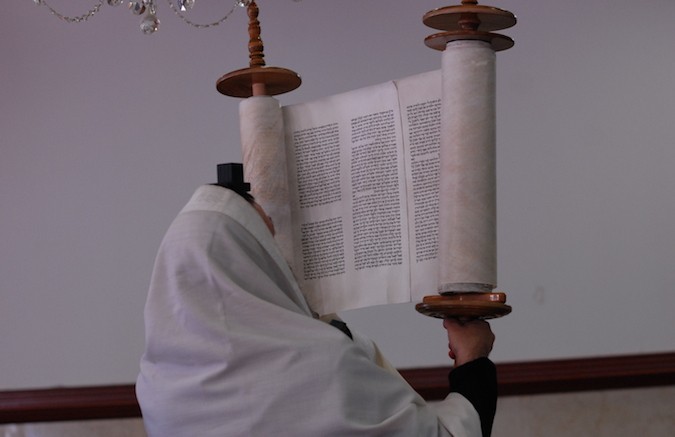 Hagbah, or raising the Torah, can be difficult. (PikiWiki Israel)

LOS ANGELES (JTA) — On Shavuot, we are reminded that the Torah is a tree of life to which we are to hold fast. But what happens when that hold slips from your grasp?

It’s a question I found myself asking six weeks before Shavuot, late in the Torah service on the last day of Passover.

Returning with my wife Brenda to Temple Beth Emet, in Anaheim, Calif., where I grew up, we both had come to attend the Yizkor service and to see her family who continue to pray there. Not far from Disneyland, it’s a shrinking kingdom of Jewish memories where, as I walked down the aisle to my seat, I could see my Hebrew school teacher and the familiar faces of those who had been friends of my parents.

A little while after we were seated, the gabbai came down the aisle, blue card in hand, and asked me if I wanted to be “hagbah” — that is, to raise the Torah after it was read. “Thank you,” I said, accepting the honor.

When my wife joined me, we quickly exchanged notes and found that we were going to be a Torah team, since while she was out in the lobby, the gabbai had asked her to be “gelilah” — the person tasked with dressing the Torah.

As the scrolls were taken from the ark, I nudged her, saying the larger of the two scrolls was probably the one I should lift. As I sized it up, I could see that this scroll was longer than the one I had grown accustomed to lifting in my minyan in Los Angeles.

Torah scrolls vary quite a bit in size, from short study scrolls weighing only a few pounds up to tall, arm-length versions that can weigh up to about 50 pounds.

Besides being a holy object, a Torah scroll is also expensive, taking a scribe a year or more to write its 304,805 letters by hand, and costing between $30,000 and $60,000, depending on size, quality of script and parchment.

Trying to keep this out of mind, I counted down the aliyot, the sections in which the Torah is read, until with the completion of the eighth and final reading. Quickly, I walked up the few steps to the bima where I had chanted, in what seemed like a million turns of the Torah ago, for my bar mitzvah.

Grabbing the wooden handles, known as the Trees of Life, I rolled each tight, so that three columns were left showing in the middle. I carefully slid the scroll towards me, and then,using the Torah reading table’s edge as a fulcrum, I slid the remaining section down, bent my knees and levered the Torah up. With the handles about even to my shoulders, I turned away from the congregation, so the worshippers could see the writing, and raised the scroll higher.

I took about four steps to the chairs where I knew I was supposed to sit, and where my wife would tie the scroll and dress it.

Only, there was a problem.

“The least stable time during hagbah is right after you sit down,” says the National Chavura Committee’s website, and this is the truth. While lowering my body to sit, I lost the tension between the two halves, and the half in my left hand began to wobble. Thrusting my arm out to steady it only caused the scroll to gyrate more in what began to appear to me as a slow-motion disaster.

Now, being asked to raise the Torah is a great honor — or, as the gabbai had put it, “greater than them all.” Rabbi Joseph H. Prouser, citing the Mishnah in an article titled, “Raising Awareness: The Symbolic Significance of Hagbah and Gelilah,” explained: “lifting the Torah scroll, is a public act of qinyan, of establishing ‘ownership'” rights.

But if that were the case, those “rights,” remembered on Shavuot with the celebration of the giving of the Torah, were wobbling away both from me and from the congregation, who if I dropped the Torah, would need to decide how to reassert their ownership. Would they fast? Give tzedakah?

One more wobble, and then my wife, seemingly coming out of nowhere, grabbed the top of the errant roller, and even though the parchment buckled into an S-like shape that widened my eyes, she stopped its fall.

“Good save,” someone said to her as she returned to her seat.

In another era, according to Prouser, the raising and dressing of the Torah was “executed by a single individual.” But today, I was ecstatic to be part of a team: a husband and wife, who had long been juggling work, children, family and Judaism, coming together, after some juggling of my own, finally to take grasp of the Torah and own it.

“She is a tree of life to those who grasp her,” says the Book of Proverbs, “and whoever holds on to her is happy.”

Edmon J. Rodman is a JTA columnist who writes on Jewish life from Los Angeles. Contact him at edmojace@gmail.com.

Be the first to comment on "On Shavuot, remembering the day I almost dropped the Torah"