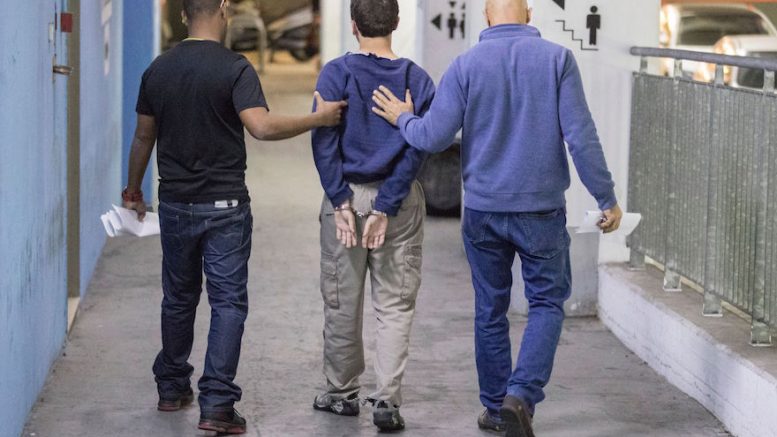 NEW YORK (JTA) — JTA doesn’t give out Person of the Year honors, but if we did I’d be tempted to nominate Michael Kadar, the Israeli-American teenager accused of making hundreds of bomb threats against Jewish community centers in early 2017.

As I wrote soon after his arrest:

“[T]he JCC bomb threat hoax wasn’t just an isolated swastika daubing — it was an ongoing story affecting Jewish institutions in nearly every American Jewish community. It shaped a communal narrative that something ugly and insidious was happening out there. And it fueled a political crisis among most American Jewish organizations and the White House, with the former accusing the latter of taking too long to denounce anti-Semitism and to comfort Jews traumatized by the bomb threats and at least two major cemetery desecrations.”

Kadar, 18 at the time of his arrest in April, “deserves” the dubious distinction for another reason: He personifies a Jewish question, perhaps the Jewish question of 2017, which is, “How do you define anti-Semitism?” Kadar’s circumstances are of course peculiar to him, asking if a series of hoaxes that terrified Jewish institutions stop being anti-Semitism because the caller is Jewish. The question I am talking about is both semantic and political, pitting left against right on at least two battlegrounds.

The first is the college campus, and the second is the national political scene. On college campuses (and wherever the fight against the Boycott Israel movement is engaged), groups intent on fighting anti-Israel activity often insist that Israel’s enemies are anti-Semitic, certainly in effect, and usually by intent. They point to slogans and imagery that draw on age-old stereotypes of Jewish control and collusion. They ask why of all the countries in the world — including those with gruesome human rights records — Israel is singled out for threats and boycotts.

Examples of the blurring of anti-Israelism and anti-Semitism abound. In September, the student government at the University of Wisconsin-Madison held a voteon an anti-Israel resolution — on Passover. A student legislator at McGill University tweeted “punch a Zionist today” and somehow survived impeachment; an anti-Zionist student group at the same Montreal university admitted that it used anti-Semitic propaganda to prevent a Jewish — and presumably anti-BDS — candidate from being re-elected to the student government. A lawsuit against San Francisco State University insists the school failed to protect Jewish students when it allowed pro-Palestinian protesters to disrupt a speech by Jerusalem’s mayor.

But there’s a big gap among Jewish activists when it comes to defining the challenge. Left-leaning groups — on campus and on the outside — worry that labeling even hostile political rhetoric as hate speech puts Jews on the wrong side of the free speech debate. They say that a tool that has only recently been applied to anti-Semitic activity on campus — Title VI of the Civil Rights Act — takes too broad a brush in defining anti-Semitism and ends up blaming legitimate critics of Israel of creating an “unsafe” environment for Jewish students.

Two of the most active groups in promoting the use of Title VI — the Zionist Organization of America and the Lawfare Project — are on the right. And they Argue that the tactics of the boycott Israel movement, especially when they include comparing Israel to Nazi Germany or denying Israel’s right to exist, are contemporary examples of an age-old hatred. A shadowy group called the Canary Mission bypasses the legal arena by publishing a virtual, and ethically suspect, blacklist of faculty and students it deems are “affiliated with movements that seek the destruction of Israel, routinely engage in anti-Semitic rhetoric and actions, and promote hatred of Jews.”

On the political front, the anti-Semitic debate broke in almost exactly the opposite way: The left was quick to label President Donald Trump as a fomenter of anti-Semitism and some of his aides and minions as anti-Semites outright. The failure of the White House to name Jews in its formal statement on International Holocaust Remembrance Day — like Trump’s tepid condemnation of the racist and anti-Semitic marchers at Charlottesville — was not just an inadvertent mistake, many on the left reasoned, but a dog-whistle to the nationalist, and sometimes racist and anti-Semitic, right that supported Trump.

Similarly, the left insists former White House strategist Steve Bannon was no mere “economic nationalist” but a cynical demagogue who was willing to play on familiar anti-Semitic tropes to stir the Trump base.

Right-wing groups, most notably the ZOA, were quick to defend Trump and Bannon. They would point to the strongly pro-Israel stance of Breitbart News with Bannon as its  head and Trump’s triumphant visit to the Western Wall at the beginning of his term. Bannon spoke at a ZOA fundraiser, and the organization issued numerous statements accusing the Anti-Defamation League of being too hard on the Trump administration and too soft on pro-Palestinian activists — especially the Palestinian-American feminist leader Linda Sarsour. (The ADL notes that it has called out anti-Semitism on the right and among progressives alike.) Meanwhile, right-leaning Orthodox Jews felt their gamble on Trump paid off when he recognized Jerusalem as Israel’s capital.

Right-left divides aren’t new to Jewish communal politics, but applying them to the fight against anti-Semitism appears to be. Once upon a time, the Jews’ antagonists were obvious: Louis Farrakhan, David Duke, Hamas, the U.N. General Assembly, neo-Nazis here and in Europe. They haven’t gone away, but now the Jewish left accuses the Jewish right of downplaying the dangers of the “alt-right.” The Jewish right says the real threat to Jews is not from pro-Trump internet trolls but from progressive campus groups, including Jews on the far left, who condemn Israel but really mean “the Jews.” The left thinks it a vital Jewish mission to enter into social justice coalitions with other minorities, including Muslims; the right says Black Lives Matter lost all moral authority when it joined the pro-Palestinian cause.

Or maybe it’s not such a new phenomenon after all, because behind the debate are a familiar series of issues that have long divided the Jewish activist class: tikkun olam vs. “peoplehood”; universal justice vs. particularist priorities; a broad human rights agenda vs. a narrower focus on Israel. A polarized political climate only created the conditions for divides that were there all along.

Be the first to comment on "op/ed: How do you define anti-Semitism? It’s complicated."