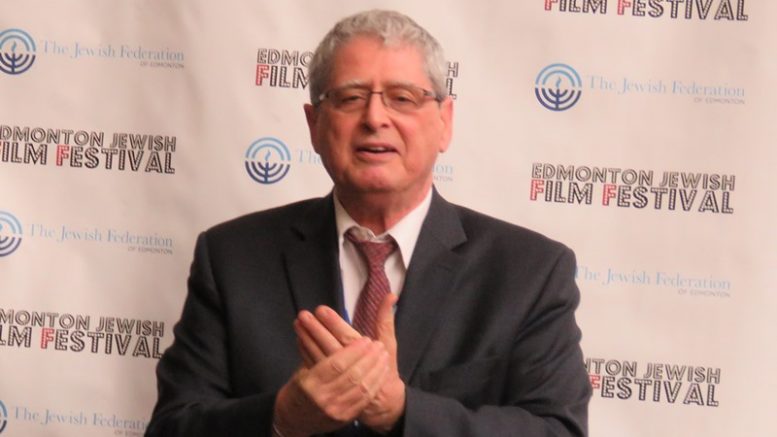 Sam Koplowicz appreciates the care that his mother received at OPH.

(Edmonton) – Every time I turn the corner on to Jasper Avenue, approaching from the east or the west, I get the same feeling. It’s a surge of pride, of satisfaction, of accomplishment. I see the tower of Our Parents Home a few blocks down the road and I think: I helped make that, even though I only played a small part in the process.

It was many years coming, and a lot of generous, dedicated people put a great deal of effort into making it happen. My father was in his eighties when he worked on it. I was in my sixties, newly returned to Edmonton after an absence of twenty-five years, and I too got involved when my old friend Lenny Dolgoy encouraged me to join the board of Beit Horim. It was immediately obvious how much determination there was to finally create a retirement home for the benefit of the Jewish community of Edmonton.

Perhaps my interest was selfish: my own mother was about to enter her nineties and I was becoming increasingly concerned about her impending isolation and precarious health. I wanted there to be a place for her to go where, over and above all the other concerns, there would be kosher food, something that really mattered to her overall well-being.

There had been a number of ups and downs over the years- attempts that for various reasons did not work out – but finally an opportunity materialized when the Beth Shalom congregation voted to allow the sale of a vacant portion of its property at the corner of Jasper Avenue and 119th Street. And what a great location it has proven to be! Central, close to the many amenities, services and attractions available in the city core and the river valley, accessible by public transit.

And it is not just a building. It has become a real home, a community and a vibrant resource for the dozens of Jewish residents and scores of others who have chosen to live there and thrive. My Mom, who was 94 at the time, was one of the first to move in at the end of July 2015, and enthusiastically took to it at once. One of her oldest friends was already a resident in the assisted living area, and it was absolutely delightful to see the two “girlfriends” be joyfully reunited. It was extremely gratifying to see how friendly, caring and competent all of the staff were, and are, on a daily basis. Delicious kosher food available for those who want it. Multiple activities, forms of recreation and play, the magnificent 14th floor (the famous sky lounge), and the wonderful bonding of friendships both old and new, all combining to make Our Parents Home a truly special place in the fabric of Edmonton life.

I am very grateful that my mother was able to spend her remaining years in such a supportive, loving environment, surrounded by people who really cared for her and looked after her with such a high degree of devotion. It was truly a blessing. A sincere thank you to all who work continuously to sustain it. You know who you are, and you should know that your efforts and accomplishments are, and always will be, greatly appreciated.

Be the first to comment on "Our Parents Home: A special place in the fabric of Edmonton life"