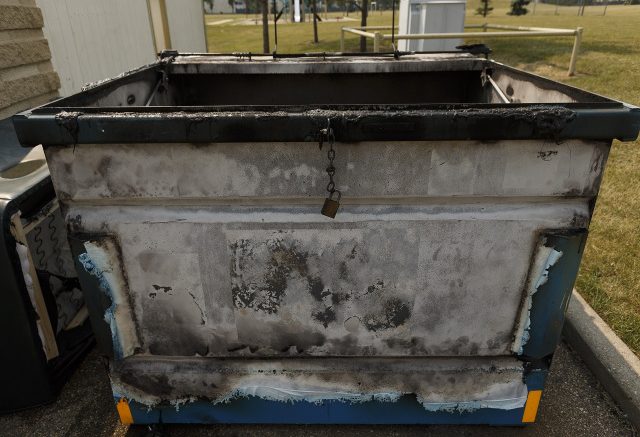 Edmonton police are investigating after fire damaged a recycling bin outside of Talmud Torah School on Saturday in Edmonton, as seen on Sunday, July 16, 2017. Ian Kucerak / Postmedia

(JTA) — Edmonton police are investigating whether a dumpster outside a Jewish school was intentionally set on fire.

The Edmonton Fire Department responded on the evening July 15 to a call about a fire in a recycling bin outside the Talmud Torah School, a public school focusing on Hebrew and Jewish studies, The Edmonton Journal reported. The school, which serves around 200 students from preschool to ninth grade, was not damaged.

Investigators in Edmonton, the capital of the Alberta province and located in midwestern Canada, believe the dumpster may have been set on fire intentionally and police are taking over the investigation, according to The Journal.

On July 16, a security guard discovered a burnt garbage bag by the school that had been set on fire. That fire damaged part of the school facade, but investigators could not say if the two fires were related. They did however indicate that they would be reviewing the school’s security footage to establish a time line.

Gerald Sorokin, executive director with the Talmud Torah Society, told media that while he is unwilling to jump to any conclusions until the investigation is complete, the threat is still concerning.

“Any threat to the physical integrity of our facility is a concern to us. Of course, it is more of a concern if there is a threat to the children and employees that work in that facility,” said Sorokin.

The Talmud Torah School was first established in 1912 and became part of the Edmonton Public School District in the 1970s, maintaining a focus on bilingual Hebrew education and a Jewish studies program.

During the school year, the school serves around 130 students between kindergarten and Grade 9 and has another 70 students enrolled in preschool and daycare programs on site.

Preschool and day programs operate out of the facility over the summer, with about 100 children attending during the week.