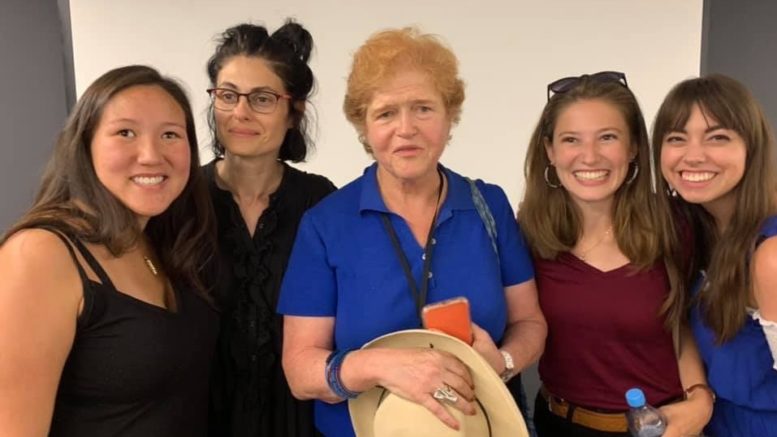 (EJNews) – Tikkun olam, the effort to repair the world, is one that I have always felt that I could best serve through the pursuit of truth and knowledge – the foundation for all meaningful scholarship.  As the summer of 2019 comes to a close, I have many extraordinary experiences to reflect upon.

This year, I was given the extraordinary opportunity to participate in the Auschwitz Jewish Center’s (AJC) Faculty Fellows Program.  Initially I hoped to participate in the AJC program so that I could continue to meaningfully integrate Holocaust literature into my undergraduate English courses, thus encouraging greater student engagement and awareness – but not only has my summer in Poland helped me to further this work but also inspired me to dedicate myself further.   Since 2000 the AJC, an affiliate of the Museum of Jewish Heritage – A Living Memorial to the Holocaust (MJH) in New York City, has invited an annual cohort of diverse academics to Poland to further research efforts dealing with Jewish memory preservation and global Holocaust awareness.  Among our ranks this year were ten graduate students and one Faculty Fellow, representing the United States, Canada, and Israel.  I was honored to be chosen to take part.

The program began in the latter half of June with three days of introductions, orientation, and presentations at MJH in New York City.  The Museum currently houses an exceptionally informative and moving exhibition titled, “Auschwitz. Not Long Ago. Not Far Away”.  As Fellows, we were granted exclusive access and were able to tour the three floors of expertly curated artifacts privately – a powerful beginning for each of our journeys.

Our time in New York was facilitated by the Museum’s Director of International Programs, Yael Friedman, a 2013 alumnus of the Fellowship herself.  Now responsible for administrating the program, Friedman guided us through intensive discussion sessions, meetings with top researchers in the discipline of Holocaust studies, and introduced us to survivors who generously entrusted us with their highly personal stories.  We were fortunate to meet with three survivors in New York and another in Krakow.  For me, these face-to-face encounters were extremely poignant – each testimonial reminded us all that our collective research efforts continue to be vital.

The program continued with a week of study in Krakow and the opportunity to attend the city’s annual Jewish Culture Festival in the Kazimierz District – the historic Jewish quarter.  The festival attracts people from all over the world and offers patrons the chance to take part in artistic workshops, hear lectures delivered by international Jewish studies scholars, sample Jewish inspired cuisine, and listen to lively musical performances in an open-air venue.

For me, the most memorable part of the Jewish Culture Festival was meeting Dr. Deborah Lipstadt, Dorot Professor of Modern Jewish History and Holocaust Studies at Emory University.  Lipstadt is the author of Denying the Holocaust (1993), History on Trial: My Day in Court with a Holocaust Denier (2005), and The Eichmann Trial (2011).  Director Mick Jackson immortalized Lipstadt in 2016 with the critically acclaimed film Denial starring Rachel Weisz.  Lipstadt is not only one of the most influential Jewish history scholars of our era, but also a leader in battling the detrimental proliferation of Holocaust denial.  Three other AJC Fellows and myself even got to take a picture with her.

Although Krakow’s Jewish Culture Festival has been criticized by some as being an inauthentic and kitschy approximation of ‘Jewish-ness’, I was personally struck by the diverse crowds that were attracted by the event.  It was my second time attending, and I see many of the efforts of the festival as sincere attempts to revitalize understanding and appreciation of Poland’s Jewish history.  This Fellowship highlighted that there are currently serious endeavors being made within Poland by both Jews and non-Jews to preserve the memory and substance of Jewish Poland, and to combat selective and revisionist historical narratives.  In Warsaw we met with Joanna Fikus, Director of Exhibitions at POLIN Museum of the History of Polish Jews, to learn about how one thousand years of Polish-Jewish life is being commemorated and preserved within a traditional educational model.

From a more pop-cultural angle, we were introduced to the founders of Mi Polin, a Jewish run company specializing in original Judaica.  Mi Polin is currently pioneering an ongoing project to preserve traces of mezuzot from pre-war buildings.  Their team travels throughout Poland to find physical signs of mezuzot, they then take molds of these indentations and cast them in bronze.  These bronze casts are subsequently fashioned into new mezuzot as a reminder of Poland’s pre-war Jewish world.  Their mezuza project has been so successful that Mi Polin artists have created mezuzot from casts taken in Ukraine, Belarus, Romania, and even one from Morocco.  From a social activism angle, non-Jewish groups like the Cukerman Gate Association in Bedzin or the Jan Karski Association spearheaded by Bogdan Bialek in Kielce work tirelessly in an inspired effort to salvage the long stifled echoes of once vibrant Jewish communities.

The majority of our Fellowship activities took place in and around the small town of Oświęcim where the AJC is based.  The AJC’s modest museum and archive is housed in the town’s only surviving synagogue.  Tomek Kuncewicz, the Center’s Director, and Maciek Zabierowski, the Center’s Manager of Education and Special Projects, are the guardians of the remains of a Jewish civilization in a town that once boasted a Jewish population of close to 60% of the total inhabitants.  Although the town of Oświęcim presents as provincial and ordinary, it is more commonly known by its more notorious German name – Auschwitz.

This was my third visit to Auschwitz-Birkenau.  Each time I stepped onto the stained earth of this site was deeply emotional and profoundly painful.  However, this past summer’s experience was far more powerful than I could have ever imagined.  Our time at both the work camp and extermination camp sites was facilitated by Pawel Sawicki, Press Officer for the Auschwitz Memorial.  Sawicki managed to give voice to the victims and impart the history in a way that has been forever seared into my mind and soul.  In conjunction with the four survivor testimonies we were privileged to hear, our time with Sawicki helped to fuse together the knowledge acquired throughout our program in a way that provided scholarly context, historical resonance, and space for moral reflection.

The AJC’s Fellows and Faculty Fellows Program provides eleven leaders of future scholarship a unique and in-depth opportunity to meet the world’s foremost names in the discipline, gain first-hand experience with how tangible history is being preserved, confront contemporary philosophical questions surrounding morality and ethical conduct, and finally, to ensure that the magnitude of the Holocaust is never forgotten or misrepresented.  Tikkun olam is a part of everything I do – as a scholar and humanitarian.  What this Fellowship provided, I believe, has made me a more insightful researcher and effective educator – but also, a better global citizen.

Jewish identity and shared cultural generational trauma ensure that ‘we will never forget’.  However, for the academic community, encouraging more comprehensive Holocaust education within different disciplines will serve to uphold the moral and ethical ideals of the humanities: acceptance, tolerance, and the pursuit of social justice.  Sadly, as our numbers of survivors dwindles, it is up to educators like the remarkable people I met this summer, to be the guardians of memory and testimony – with all its painful honesty and stinging truth.