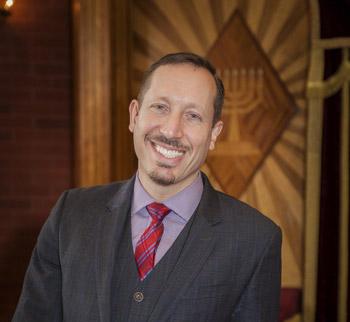 On Sunday September 9, Edmonton Beth Israel’s Rabbi Daniel Friedman was in Washington DC, where he joined 300 Orthodox Union affiliated rabbis from North America as well as 1000 American Israel Public Affairs Committee activists in a last ditch rally against the Iran nuclear deal. In a column published in the August 31 edition of Edmonton Jewish News, he explained his rationale for attending the rally.

His column appears below:

On September 9, I will be in Washington DC along with hundreds of rabbis from North America protesting the recent deal with Iran.  The campaign has been organized jointly by AIPAC, OU and RCA.   How do I know that the Iran deal is a bad idea and that I should take time a week before Rosh Hashanah to campaign against it?   What makes me think that I know better than top world leaders including the president of the United States?

On the first day of Rosh Hashanah, we read about the birth of Isaac.   After many decades of barrenness, Sarah finally gives birth.  But it is not Abraham’s first child.  Within a short time, the elder son Ishmael begins to bully his younger brother.  Sarah is indignant and insists that Abraham evict Hagar and her son.   But Abraham is the epitome of kindness!  He can’t throw them out into the wilderness!  He raises his eyes Heavenward, turning to the Almighty for advice.

“All that Sarah says to you, heed her voice,” comes the Word from Above.

You can imagine what Abraham was thinking: G-d, I don’t need to do this.  I have a plan how we can all stay living under the same roof as one big happy family.  I’ll figure out how to discipline Ishmael better.  I’ll put measures in place to protect Isaac.  There’s got to be some solution, G-d, that will work out and make everyone happy.

I don’t understand the Iran deal.  It is hundreds of pages long and even if I could manage the read, I wouldn’t understand most of the technical, scientific jargon.  What do I know about the number of centrifuges needed to enrich weapons-grade uranium?  But what I do know is that Isaac is in pain.  The future of the Jewish people is at stake.

How do I know that?  In the State of Israel, not only has the government condemned the deal, but so has the opposition.  When both sides of the parliament are unanimous in their opinion, you know that something serious is at stake here.  I’ve spoken to many Israelis and the fear on the street is palpable.  American and European leaders can afford to make mistakes from thousands of kilometres across the ocean.  For Israel, for our people, a mistake has existential consequences.

When Isaac is feeling pain, diplomacy is not an option.  The only option on the table is completely removing Ishmael from the equation.  Thus far, that goal has been accomplished with the crippling sanctions that have been imposed on Iran for the last decade.  Moreover, thank G-d, our Government of Canada understands who is running Iran, and unprecedentedly chose to cut ties with the evil regime.

Unfortunately though, our country is not calling the shots on this one.  As we speak, sanctions are being lifted and money is once again flowing into their coffers, which they are using almost immediately to fund terrorist activity throughout the region.

I am going to Washington DC representing the Edmonton and Canadian Jewish community.  I don’t know if we can change anything but at least we will know that we did whatever we could to affect the course of history and act in the best interests of our people.   These upcoming High Holy days, our prayers will be needed more than ever.

May we hear good news and may we all be blessed with a year ahead of good health, prosperity and security.