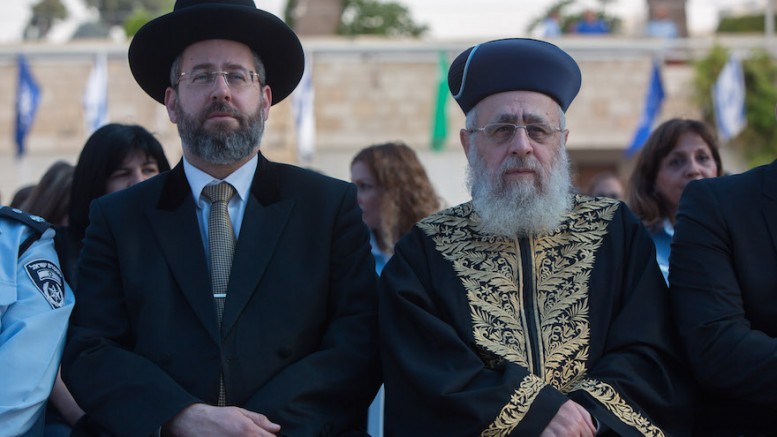 (JTA) — Two years ago, Israeli advocates for religious pluralism spoke of a “window of opportunity” to advance their cause. For the first time in a decade, the governing coalition included no haredi Orthodox parties. The Knesset’s second biggest party, Yesh Atid, advanced a raft of legislation to change the Orthodox-controlled status quo. Even the religious Zionist Jewish Home party seemed open to change.

Now it’s safe to say that window has shut. If 2013 and 2014 saw limited progress on religious reforms in Israel, from army service to conversion, 2015 was the year the country’s haredi Orthodox establishment reasserted itself. Haredi leaders reentered the government, rolled back reforms and sent warning signals to leaders who questioned business as usual.

2014 ended on something of a high note for religious pluralism activists: In late November, the government enacted new regulations that allowed dozens of local Orthodox rabbis to perform Jewish conversions, effectively stripping Israel’s haredi Orthodox Chief Rabbinate of its monopoly on conversion.

Days later, the government fell apart, elections were called and religion-and-state fell off Israel’s agenda. The campaign revolved around questions of economics and security, not marriage and conversion. And both left and right made clear they would include haredi parties in their coalition, spelling doom for the 2013-14 reforms.

Haredi parties lost five seats in the March 17 election, but no matter: Prime Minister Benjamin Netanyahu needed them in his coalition, andaccepted their demand to revert to the pre-2013 status quo. In the ensuing months, a law to draft haredi men was defanged; the conversion reform was repealed, and ongoing reforms of kashrut, burial, haredi education and the rabbinical appointment process were stalled. Government subsidies to haredi yeshivas shot back up.

Nine months after the election, hope for legislative change is scant. Speaking to JTA in December, Jewish Home Chairman Naftali Bennettpredicted that any future coalition’s likely reliance on haredim would make reform next to impossible.

Even modern Orthodox leaders weren’t immune from accusations. Efrat’s chief rabbi, the U.S.-born Shlomo Riskin, who advocates progressive policies within Orthodoxy, was summoned before the Chief Rabbinate in May for an unusual hearing to review his appointment. Following public pressure, the Rabbinate renewed his term.

And in December, Israel’s Ashkenazi chief rabbi, David Lau, admonished Bennett for visiting and praising a Conservative day school in New York, even though Lau had visited a similar school earlier in the year.

Bennett has drawn his own share of criticism, meanwhile, regarding a project aimed at strengthening Diaspora Jewry’s connection to Israel. The Israeli government and the Jewish Agency for Israel inaugurated the Joint Initiative of the Government of Israel and World Jewry with much fanfare last year. But this summer, the Jewish Agency withdrew from the project, accusing Bennett’s Diaspora Affairs Ministry of co-opting the project to promote its own goals. Its future remains uncertain.

Even Women of the Wall, which has seen gains in recent years, suffered a recent setback. The group, which holds monthly prayers at the Western Wall’s women’s section, won the right to pray undisturbed two years ago and began sneaking a Torah scroll into its services this year. In November, Netanyahu recommitted himself publicly to finding a compromise to accommodate non-Orthodox prayer at the site. But in December, Netanyahu affirmed there in fact would be no imminent change to the wall’s haredi-controlled status quo.

There was some good news for pluralism activists this year. Israeli President Reuven Rivlin, who had previously derided Reform Judaism, began embracing the movement this year, holding a pluralist study session and reaching out to Reform leaders. Liberal Orthodox rabbis set up a non-Rabbinate conversion court in August. And in the last week of the year, the Israeli army announced it would allow soldiers to be buried in non-Orthodox ceremonies.

Perhaps most significant, most Israelis continue to want significant religious reform. In a survey this September, as in previous polls, large majorities of Israeli Jews supported changes to marriage and conversion laws. Israel’s government, however, has yet to agree.

Be the first to comment on "The rabbinate strikes back: 2015 in Israeli religious pluralism"