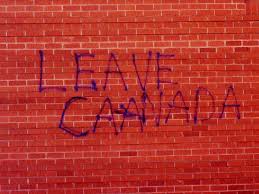 “A number of the congregants were quite distraught, having seen the graffiti on their way into the synagogue. They alerted me to it and, of course, I was shocked and devastated as well,” Rabbi Daniel Friedman told Global News, adding, “We know that this is not typical of our Canadian brothers and sisters, most of whom share our Canadian values of openness and tolerance.”

The Edmonton Police Service’s hate crimes unit is investigating the incident. It appears to be related to other acts of vandalism in Northern  Alberta. One week prior to the synagogue vandalism, a south Edmonton Sikh temple was defaced with slogans like “Leave Canada” alongside a profane, racist comment. Last October, a mosque in Cold Lake, some 300 miles away, was defaced by similar graffiti messages. No one has been charged in any of the attacks.

“It’s upsetting … it’s unnecessary. It’s ridiculous vandalism,”  said Dr. Stanley Kitay, president of the synagogue, in a CBC report. “But at the same time, it just reignites the notion that there are people out there with these crazy feelings and racial, religious, ethnic biases and that they’re willing to skulk around in the middle of the night and spray paint.”

While the attack was non-violent, Kitay said the graffiti messages are still very disturbing.

A hate crimes investigator with EPS told CBC that it is typically very difficult to locate those responsible for graffiti like this because the vandalism is often done quickly and at night to avoid the chance of being seen.

In an article in the Canadian Jewish News, Rabbi Friedman stated, “The good news is that the outpouring of sympathy and support has been heartwarming. I’ve received countless emails and phone calls from random citizens expressing solidarity, from as far afield as a pastor in Cold Lake, AB. A local imam reached out to me. A Muslim university student volunteered to assist with the cleanup. Words can’t express how overwhelmed we feel by the love and care we’ve received from our fellow Canadians.”

“The most important thing to remember,” he continued, “is that the evil perpetrators are individuals. Most Canadians – of all stripes – are peace-loving, tolerant people. Indeed, outside Israel, Canada is the best country in the world for Jews today, and perhaps all of history.”

In a public statement MP Uppal said, “I was deeply saddened to hear reports of an act of anti-Semitic vandalism to the Beth Israel Synagogue in Edmonton. I have visited this synagogue many times and have a close, personal connection to the congregation.”

“As Minister of State for Multiculturalism and as a Canadian, I condemn this cowardly anti-Semitic act of vandalism in the strongest sense.  From Confederation to today, Canadians from all different backgrounds, cultures and religions have contributed to shaping our great country.”

“I call on Canadians to firmly reject this and any other despicable expressions of hatred against Canadians of any faith or cultural background. I am pleased to hear that the Edmonton Police are investigating this disturbing act.”