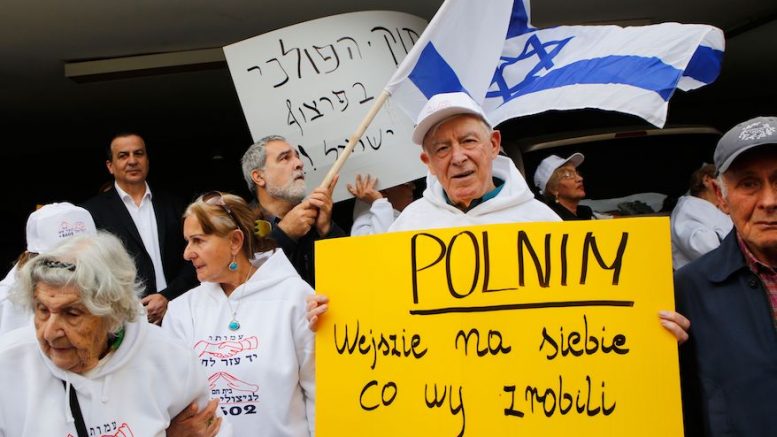 WARSAW, Poland (JTA) — A letter signed by a group of 50 Poles honored by Yad Vashem as Righteous Among the Nations has appealed to the governments of Israel and Poland to return “to the path of dialogue and reconciliation.”

“Please do not write the history anew,” reads the letter sent Monday to the prime ministers of the two countries.

“The greatest tragedy in the history of both our nations was once and for all recorded during the dark night of the Nazi occupation, the victims of which we are still all of today,” wrote the group, also known as Righteous Gentiles. They acknowledged that “as in everyone, also in our nation, there were wicked people, [who] acted on their own behalf, not on behalf of the Polish state.”

Signatories of the letter stressed that those people were members of Polish nation.

“We were also afraid of them,” they said.

The letter was signed by the members of the Polish Society of the Righteous Among the Nations, a nongovernmental organization founded in 1985 on the initiative of people honored by the State of Israel as Righteous Among the Nations for saving Jews during World War II. The society aims to preserve memory and spread knowledge about the Nazi occupation in Poland, about the Holocaust and about people who risked their lives saving Jews.

Its letter follows the enactment of a new law in Poland that criminalizes those “who, in public and contrary to the facts, imputes that the Polish Nation or the Polish State was responsible or co-responsible for the Nazi crimes committed by the Third Reich or for other crimes against peace, humanity or war crimes, or otherwise grossly diminishes the responsibility of the actual perpetrators of these crimes, shall be liable to a fine or imprisonment of up to 3 years.”

The law has triggered protests from Holocaust survivors and Israeli leaders, as well as researchers, historians, journalists and Jews around the world.

Now the Righteous are urging “our two nations, united by a nearly 1,000-year-old common history, to build a covenant and a future in Poland, Europe, Israel and America, based on friendship, solidarity and truth.”

The letter also asks the international community “for empathy and prudence, for sensitivity in creating law and responsible media narrative, for honest and independent historical research.”