(Edmonton,AB)— Rabbi Mendy Blachman of the Edmonton JLI will recount 2000 years of Jewish history through the lens of six epic debates that rocked the Jewish world and still resound powerfully today.

Beginning Monday, October 30th, at 7:30 pm, Chabad of Edmonton will be offering a new six-session course from the Rohr Jewish Learning Institute (JLI), titled Great Debates in Jewish History, with a delicious dinner served before each lesson.

In commemoration of 70 years since archeologist Eleazar Sukenik purchased the first Dead Sea Scroll in November of 1957, the community is invited to examine and unlock the stories of these ancient manuscripts and what their texts reveal about the heated dispute between the Dead Sea Sect and the Jewish establishment.

“Judaism welcomes debate and discourse,” Rabbi Mendy Blachman the local JLI instructor in Edmonton, told Edmonton Jewish News. “This JLI course invites participants to gain fascinating insight into six mega-debates that have split the Jewish community throughout our history – and some of these matters continue to be debated today!” 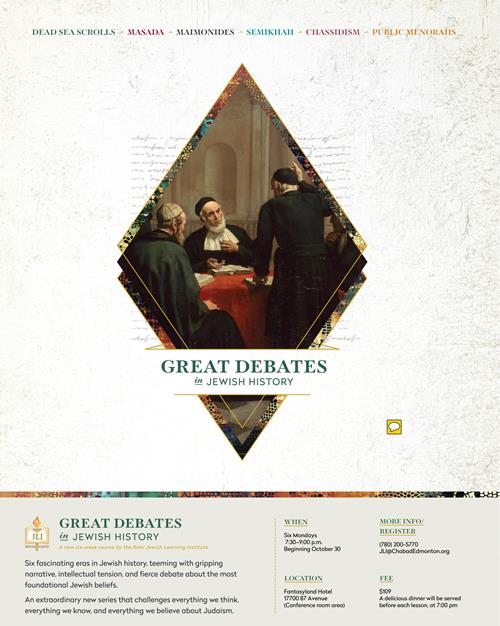 Great Debates in Jewish History raises such questions as: Why were the authors of the Dead Sea Scrolls opposed to rabbinic interpretation? What motivated the rebels at Masada? And what is the Jewish perspective on taking up arms in situations where defeat is inevitable? What role does nationalism play in Judaism? Are faith and reason mutually exclusive? What motivated the anti-Maimonideans in banning – and even burning – some of Maimonides’s works? And is religion designed to be a private and personal experience, or one to be proudly paraded in the public domain?
“Our goal is to invite participants to seek out the rationale behind both sides of each debate – even sides they may disagree with,” explained Rabbi Zalman Abraham, of JLI’s Brooklyn, NY headquarters. “In doing so, we hope to unite the community around the very issues that have divided us for so long.”

Like all JLI programs, this course is designed to appeal to people at all levels of knowledge, including those without any prior experience or background in Jewish learning. All JLI courses are open to the public, and attendees need not be affiliated with a particular synagogue, temple, or other house of worship.

JLI, the adult education branch of Chabad-Lubavitch, offers programs in more than 800 locations in the U.S. and in numerous other countries world wide. More than 400,000 students have attended JLI classes since the organization was founded in 1998.

Interested students may call (780) 200-5770 or visit ChabadEdmonton.org for registration and for other course-related information. JLI courses are presented in Edmonton by Chabad of Edmonton.